A parody of reality 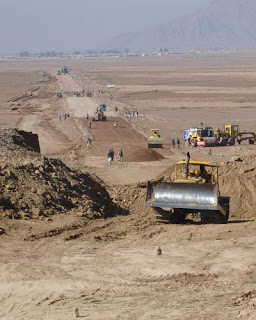 The latest news from Afghanistan is of a third soldier being killed yesterday, making five in less than a week and bringing the total to 174 dead. The latest casualty is another from the Welsh Guards, killed while on foot by a "contact explosion". He was taking part in a "deliberate operation" near Gereshk, as part of Operation Panthers Claw.

Given the intensity of operations and the hazards of war, it is inevitable that we are seeing a spike in the casualty rate and, to put it in perspective, the current losses are modest compared with most other campaigns.

We are told, of course, that in war, "risks must be taken" - usually by the people who are not taking them. But that risk must be balanced by the rewards. If the operation in Afghanistan was succeeding, with progress towards a stable, peaceful and prosperous country – with our expenditure of blood and treasure really making the difference – then we could concede that it has been worth it.

Not so, says Stephen Grey, freelance journalist and author of the bestselling book Snakebite, who recently gave evidence to the House of Commons Defence Committee on the "Comprehensive Approach" – the supposedly co-ordinated inter-agency system which is tasked with bringing peace and re-development to Afghanistan.

"We owe it to all those that are sacrificing themselves in Helmand, to be brutally frank about what is going on there and what is going wrong," Grey tells the Committee, "because it is only with that frankness that I think certain things can be put right."

One admires his optimism as he then goes on to declare that, "From the perspective of those on the ground, I think the Comprehensive Approach has largely been a parody of reality. In some ways the failure to get that right has done as much to stir up conflict and cause what is happening as it has to bring peace to Afghanistan, which surely is the ultimate objective there."

Taking a measured look at that statement, Grey is telling us that the upsurge of violence in Helmand province is a result of our presence there, and that, in effect, the 174 lives lost, the hundreds more injured and the expenditure to date – over £3 billion on the military effort alone – has achieved precisely nothing. In fact, it has made matters worse.

Stephen's full evidence can be read here and needs to be read carefully by anyone who wishes to gain a greater understanding of what is going on out there.

So inadequate and ill-co-ordinated are our efforts that, according to a soldier who has e-mailed Grey with his views, the sentiment that most accurately summarises our efforts is "a sense of total lack of delivery of promises." The view is that "very little of what is talked about is actually being put into practice."

"All we really did," says this soldier, "was to fight and kill the Taliban." He adds: "The numbers are staggering, and why is that? Because we are good at it, structured for it and resourced for it, but that should not be the centre of gravity of our efforts."

Indeed it should not be the centre of gravity of our efforts and one remedy that Grey offers is "roads". More specifically, he says:

... there are ways of tailoring development projects so that they can be both doable in terms of advancing security and development, for example, road building. Roads are much more difficult to completely destroy than a new clinic, for example. They both enhance security and they boost the economy, allowing people, for example, to take legitimate crops to market as well as allowing a much more efficient security deployment.

Grey also suggests that much of the development effort must be militarised. "The military need to have the people that can do this side of the work," he says.

As to the official information coming out of theatre, Grey recalls his experience in Iraq when soldiers were being briefed for the visit of the prime minister. They were choosing junior officers, certainly young soldiers, who would be in line to talk to the Prime Minister and what they should tell him. The "lines-to-take book" had got up to 130 pages.

The whole thing to Grey seemed completely circular - basically politicians going out to be told what they wanted to hear. Officials disseminate an "almost a professional optimism" to politicians "which is not borne out by the private opinions of many of the same people that make these public statements."

Finally, for those who would wish to make partisan political points out of this situation, Grey gives them plenty of material. With so many different agencies at work (not), the strategic commander of all UK agencies is the Prime Minister. "There is no other place where it comes together," he says. "So there was no-one in charge apart from the Prime Minister ... and [he] has got other things on his mind." That is the real problem, Grey states.

He concludes that, "Britain's interests need to be combined into one role, an ambassador that combines the role of both military commander and civil commander." If such a person exists, he has yet to emerge but, unless he (or she) does – and soon – others may conclude that Britain's interests are best served by departing as rapidly as possible. At least then, we would not be making the situation worse.