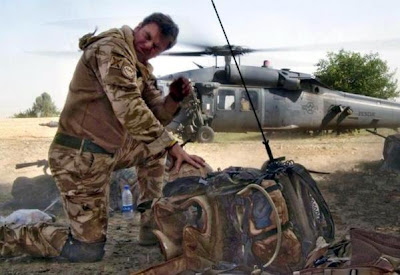 As another British soldier is reported killed in Afghanistan, two investigative sleuths from The Daily Mail, Tim Shipman and Matthew Hickley, breathlessly tell us that the announcement came "as Lt Col Richardson revealed that American, Dutch and even Australian helicopters are being used to launch British combat operations in Afghanistan." UK forces have used coalition aircraft to "seize areas of ground" from the Taliban, said the Colonel.

The Daily Telegraph understands that American Chinooks were used for a combat mission as part of the Panther's Claw operation within the last month. Lieutenant Colonel Nick Richardson, spokesman for Task Force Helmand confirmed that UK forces were forced to rely on foreign helicopters.

These fearless hacks can however, shelve their dreams for nominations for the next Pulitzer prize for investigative reporting. The MoD Website for 23 June – nearly a month ago – blandly informs us that:

More than 350 soldiers from The Black Watch, 3rd Battalion The Royal Regiment of Scotland (3 SCOTS), have launched an airborne assault into one of the last Taliban strongholds.

Not only did we rely on helicopters (with the MoD thoughtfully providing a pic – see above), we were "forced" to rely on a USAF Spectre gunship, Harriers (USMC – ours have gone home) and probably US Predator UAVs. Since 90 percent – or thereabouts – close air support is provided by US assets, we are routinely "forced" to rely on F-15s, F-16s, B-1 Lancers, A-10s ...

And then, of course, on the ground, we are "forced" to rely on Danish Leopard II tanks, on their APCs, on Estonian APCs and even the Ex-MoD Mamba mine protected vehicles which we sold off for a song.

But Hey! This is a coalition effort. We are not alone ... and have not been for some time. But then, here's another "scoop". During WWII, the US stripped out the armour from its one and only armoured division and sent the Shermans to the 8th Army. To win the battle of el Alamein, we were "forced" to rely on foreign tanks.