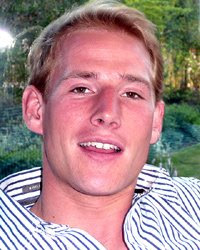 In The Daily Telegraph today are moving extracts from the personal journal written by Lieutenant Mark Evison, 1st Bn The Welsh Guards. They are moving because in May he died from wounds received in Afghanistan.

According to the MoD website, Lt Evison was the Officer Commanding Number 7 Platoon, which was part of the Number 2 Company Group operating in the south of Nad e-Ali.

The company had four patrol bases or check points, one of which - Haji Alem - was occupied by Lt Evison and his platoon. In addition to defending the check point they were responsible for patrolling the local area in order to deter insurgent activity and improve security for the local population.

On 9 May 2009, Lt Evison was leading such a patrol when they came under enemy fire. He was hit in the shoulder by a single round, and was evacuated back to the hospital in Camp Bastion. Despite the best medical treatment available, he was showing no sign of recovering, and he was flown back to Selly Oak Hospital in Birmingham. His family were with him when he died.

There are several aspects of the journal which invite comment, but the one entry which is particularly poignant is Lt Evison's description of the old smuggling fort which his platoon took over as its base. He wrote:

Around the fort it is hard patrolling country. There is not much cover and therefore movement is restricted. If we move to the SW then extraction back is difficult. There is a canal directly outside which although gives good cover is terribly exposed on both banks and can be covered by at least three or four firing points. Although one must not set patterns, with only two routes into that area it is virtually impossible. There is a definite lack of steer from above as to how to play this one. I am yet to be given a definite mission and clarity as to my role out here.

In this environment, therefore, Lt Evison and his men are committed to routine patrols, otherwise known as "mowing the grass". Evison himself is uncertain of his mission and the tactical situation is such that patrols are exposed to unavoidable hazards, in an extremely hostile area, where it would seem that the tragic result of his death was almost inevitable.

It would be wrong to draw too much from this single episode but it is reasonable to pose the question as to why Evison and his men were there, and what it was they were supposed to achieve. How did placing men in extreme jeopardy, carrying out a routine which was only too obvious to their enemy gain anything? How did his death, or his patrol routine, actually help further the declared aims of our government or the interests of the Afghani people?

Nad e-Ali district, as we now know, is the focus of a much larger operation, codenamed Panther's Claw, aimed at pushing the Taleban out of the area, following which British troops will, presumably, be repeating on a larger scale, that which Lt Evison's patrols were doing. And it is precisely that type of activity which led to the deaths of five soldiers from 2nd Bn The Rifles, last week.

Crucially, though, the ambush which led to their deaths was mounted in Sangin, a supposedly pacified area yet one in which violence continues, right up to date with the report of a civilian Mi-26 having been downed about a mile from the British base in Sangin, with six killed in the aircraft, and a child killed on the ground.

It is germane to note, in passing, that had this been a British military helicopter - as so easily it could have been - with British soldiers and airmen killed, this would have been at the top of the news agenda. But it seems that the deaths of civilians, to say nothing of an innocent child, are of little media concern.

And now it is that Dannatt bleats to the BBC Radio 4 Today programme that: "A high number of deaths inevitably makes you question what we are doing, how we are doing it. The conclusion one has to reach is, going right back to basics on this, that this mission is really important."

This is a man who is professional head of an Army which was unable give one of its front-line officers a "definite mission" and clarity as to his role, having him and his men "mowing the grass" and getting him killed. Dannatt is right to talk about "going right back to basics", but we cannot avoid thinking that he should have been looking in the mirror when he said those words.