See also: Time to get this sorted 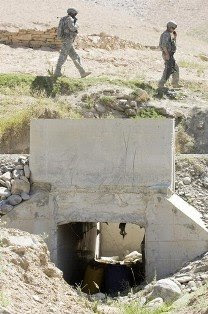 With its unerring instinct for getting it wrong, the BBC – in the persona of its defence correspondent Caroline Wyatt – is framing the debate over the use of the Viking and the deaths of Lt-Col Thorneloe and Tpr Joshua Hammond as one of "armour versus mobility", suggesting that there is "a fine balance."

To be fair, she is not the only one to get it wrong. This is the way much of the British military thinks, thus channelling the argument into a sterile comparison between the merits of the heavy but well-protected Mastiff and the lighter, more mobile vehicles such as the Viking and the Jackal.

As the military would have it - enunciated by Amyas Godfrey to the BBC and also to The Guardian - the choice of which armoured vehicle to use in any campaign is a question of balancing risks and benefits.

"It is all about getting the balance right between the need for armour and the need to be light and flexible, with the ability to go off-road," says Godfrey. "Mobility is a form of protection in itself, and with heavier armour, you sacrifice mobility for greater protection."

At that entirely superficial level, there is some merit in Godfrey's assertions. Roads are a natural target for terrorists and, as that picture above shows, one particular weak point is the culvert bomb, which is fiendishly dangerous and requires a great deal of manpower and other resource to thwart. The ability to transit an area avoiding the roads – and such devices – is therefore an obvious advantage.

However, one almost gets tired of the repetition here, having yet again to draw the distinction between design and weight. Godfrey, in common with so many of his ilk, equates protection with "heavier armour".

Such are the constraints on their own thinking that they seem incapable of understanding that mine/IED protection is not primarily a function of weight of armour but of design – the principles of which we elaborated recently. It is this complete failure of the military establishment to understand these fundamentals which lies at the heart of this sterile debate.

To that extent, as we have so often observed, mobility and protection are not mutually exclusive. It is only the sterile thinking of the British military which makes it so. It would be perfectly feasible – by design - to produce a tracked vehicle with the mobility of the Viking, yet with the inherent protection of a Mastiff. This should not add significantly to the weight or, more particularly, hamper mobility.

Those proponents of the Viking, who argue that its mobility has saved more lives than its lack of protection have lost, are therefore arguing from a false premise. Mobility and protection are not mutually exclusive – it is possible to have both.

There are, however, other issues to address, where the whole argument on off-road mobility falls apart. One of those is the "pinch" or "choke" point problem, which we have also discussed. No matter how good a vehicle's off-road performance might be, there are natural features in any terrain which restrict and funnel movement into predictable areas, and it is there that ambushes are so often mounted.

Even in wide open spaces, there are constraints. As Tom Coughlan writes in The Times of the Viking, "in the heavily irrigated fields along the Helmand river, room for manoeuvre is more limited, and churning up farmers' fields with its tracks will not help to win the support of the local populace."

This then leads to a paradox, where designers optimise for off-road performance and then, to deal with the occasional but deadly ambush, add armour to their vehicles. They end up – as they did with the Vector – compromising performance without significantly improving protection. The outcome is an off-road vehicle with less performance than a custom-design protected vehicle, from which stems the mantra that you cannot keep increasing weight.

Locked into this trap – yet under pressure to reduce casualties - they have nowhere to go but to develop bigger and stronger vehicles in order to carry more armour. This is precisely the line adopted with the Viking, where it is to be replaced by the Warthog – a vehicle with heavier armour but sharing the same design flaws.

However, Major-General Julian Thompson, who commanded 3 Commando Brigade Royal Marines in the Falklands conflict in 1982, makes a different point. He tells The Times - undoubtedly based on his experience in Aden and then Northern Ireland: "The question is not whether one vehicle or another is sufficiently armoured, it's about the lack of helicopters. We need more helicopters in Afghanistan to ferry troops in high-risk areas." 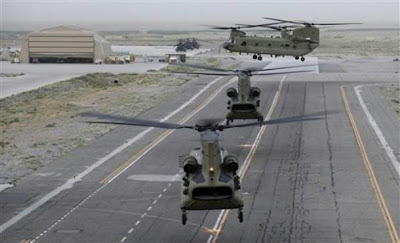 This is a good point. The ultimate mine protected vehicle is the helicopter. Unfortunately, as we pointed out earlier, the option of relying on helicopters is not available to the coalition forces, and not entirely because there is a shortage.

Unlike Northern Ireland, where the security forces were the main target of the terrorists, in Afghanistan the population in general is being attacked, particularly on the roads, which are needed to move large quantities of supplies. They are used heavily by Afghan security forces and civilians.

To abandon those roads to an enemy which is indiscriminately slaughtering civilians as well as the security forces is also to abandon any attempt at winning "hearts and minds". The military must maintain a strong presence on the roads and, therefore, will always be exposed to a risk that cannot be mitigated by the greater use of helicopters.

Nevertheless, there are limitations to the amount of protection that can be afforded, even in the best designed vehicle. To make that point - or something akin to it - Caroline Wyatt calls in aid the spokesman for Task Force Helmand, Lt-Col Nick Richardson.

He insists the Viking remains an excellent vehicle, telling us that, "Armour is the last resort in terms of defeating the threat. It is much better to be able to avoid the threat than to have to rely on the armour defeating the threat when it is initiated. He then states: "It doesn't matter how much armour you have - it can always be overcome if you make the charge big enough."

The "bigger bomb" threat is overstated, an issue we have promised to address in a separate post, and neither should "armour" (more properly, protection) be considered the last resort.

In their Bush War between 1962 and 1980, the Rhodesian Army found that it was impossible to ensure that the thousands of miles of unpaved roads were kept clear of mines and IEDs. Therefore, vehicle protection was treated as a routine precaution. (See this study by Franz J Gayl - 147 pages, pdf). 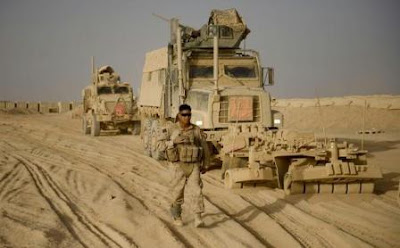 That notwithstanding, protection is by no means the only precaution. Route clearance – using basic devices such as mine rollers (pictured above) plus more sophisticated technical aids, and even sniffer dogs - route proving, surveillance, routine patrolling to deter activity, intelligence, interdiction of supplies and disrupting the bomb-makers are all part of the armoury which must be deployed to defeat the joint threat of the mine and the IED.

To distil the argument down to one of "armour versus mobility", therefore, is as facile as arguing that either armour or mobility is the answer. But there is no more facile an argument than to assert that "armour" – i.e., protection – must be sacrificed to mobility. That is the wrong debate.