Time is not on our side 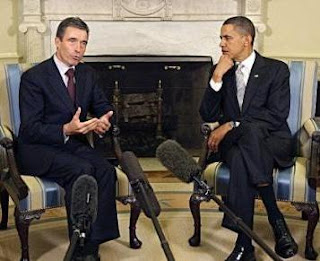 It was at the end of August, or so we are led to believe, that president Obama received McChrystal's Afghan assessment report yet only yesterday has the White House started in earnest its strategy review. This is being done at senior official level, taking in video conference discussions with McChrystal in Kabul, and the debate is joined today by Obama, alongside vice president Joe Biden and secretary Gates.

Reading the runes, Obama seemed to be moving towards favouring the counter-terrorism strategy when he spoke yesterday of "dismantling, disrupting, destroying the al Qaeda network" as the mission, without mentioning the Taleban.

Emerging as an influential voice in the debate is failed presidential candidate John Kerry, now Senate foreign relations committee chairman. Not only was he at the White House last week, meeting with the vice president, he has been given the opportunity to express his views in the Wall Street Journal, in an authored opinion piece headed somewhat contentiously: "Testing Afghanistan Assumptions".

Referring to the McChrystal report, Kerry declares: "Now, we in Congress have our own assignment: to test all of the underlying assumptions in Afghanistan and make sure they are the right ones before embarking on a new strategy." Never more was it clear that the McChrystal "strategy" is not a done deal, and there is to be much political bloodshed before a resolution is reached.

As might be expected, Kerry rehearses the issues, with particular reference to the "deeply flawed presidential election last month", then noting that the debate so far has focused on absolute numbers - how many U.S. and allied troops are required, how many Afghan soldiers and police do we need to train, how many more billions must we pour into that impoverished country?

But, says Kerry, all the numbers are meaningless if the goal is ambiguous or the strategy is wrong. Before we send more of our young men and women to this war, we need a fuller debate about what constitutes success in Afghanistan. We need a clearer understanding of what constitutes the right strategy to get us there. Ultimately, we need to understand, as Gen Colin Powell was fond of asking, "What's the exit strategy?" Or as Gen David Petraeus asked of Iraq, "How does it end?"

Behind all this though, is the ghost of Vietnam, and Kerry brings it to the fore. One of the lessons from Vietnam, he says, is that we should not commit troops to the battlefield without a clear understanding of what we expect them to accomplish, how long it will take, and how we maintain the consent of the American people. Otherwise, we risk bringing our troops home from a mission unachieved or poorly conceived.

Hinting then at what will be the Democrat line, Kerry goes on to note that the McChrystal assessment "offers no timetable or exit strategy, beyond warning that the next 12 months are critical." He does not offer an alternative, but the marker is there. If McChrystal gets what he wants, or part of it, there will most likely be strings. It would be unsurprising if this was not precisely what Kerry is hinting at – an exit strategy and a fixed timetable. For the moment though, it is "wait and see". The Senator wants Obama to be given time and space to "test every assumption and examine every option."

The longer he leaves it, though, the greater the cost to Obama. Opinion is hardening and the different factions are shaping up for the fight of the century, which will make the insurgency in Afghanistan look like a walk in the park.

On the one hand, he appears to have the support of Anders Fogh Rasmussen, Nato secretary-general, who met Obama yesterday (pictured). ''The first thing is not numbers,'' says Ramussen, ''I agree with President Obama in his approach: strategy first, then resources,'' he said.

One the other hand, the Republicans are scenting blood. Another failed presidential bidder, Senator John McCain, is backing McChrystal, declaring that "time is running short." He argues for the president to approve the call for additional troops. If Obama fails to do so, it would "put the United States in much greater danger." "Time is not on our side," McCain emphasises, "so we need a decision pretty quickly."

One can see a political strategy emerging here. McCain says he thinks the drawn-out debate over the Afghan war policy in the United States "may be perceived by some of our allies in Europe and Pakistan and that region as a bit of weakness." Obama is being positioned to come across as weak and indecisive. Whatever decision he comes up with, if he leaves it too long, that will be the impression which gains traction.