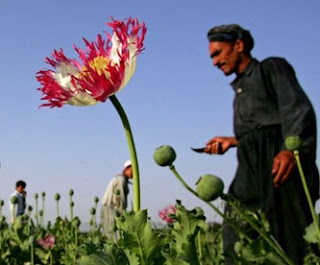 Putting two entirely different items together, on the one hand, we see from The Independent that the price of Kalashnikovs has doubled in Afghanistan and weapons are now fetching $600 apiece.

This might suggest that the Taleban, in continuing to finance its insurgency, is facing hard times. Not since 1990 has the opium price been so low and, caught between the classic squeeze of increased costs and declining income, the effect of these prices must, on the face of it, be significant. The arms trade is most often financed by opium sales.

As to the price-hike in Kalashnikovs, Kim Sengupta tells us this is a cause of some surprise. A surge of demand is blamed, with a steady stream of weapons said to be heading for the north to the Tajik constituency of Abdullah Abdullah, the presidential candidate who claims the election is being stolen by Karzai.

Sengupta adds that the arms shipments are a source of alarm in a country where political stand-offs have often been settled at the point of a gun. Few Western diplomats claim there is an immediate danger of civil war but tensions are mounting after the recent election which have been mired in bitterness and recrimination. 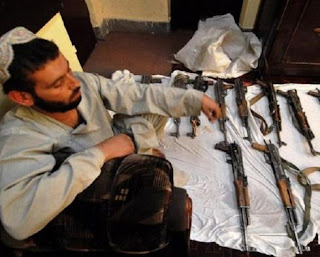 However, it is difficult to reconcile Sungupata's intelligence with a recent report in The Guardian. Firstly, that confirms our understanding that much of the arms trade takes place in Tajikistan, on the northern border with Afghanistan, so the flow of weapons would be southwards, not "heading for the north" as Sungupta indicates.

Secondly, the Guardian reporter, Ghaith Abdul-Ahad – with a dateline of 18 August - puts the price of a Kalashnikov at $400. These weapons, though, are not in great demand. The preference is for the "Kalakov", the Afghan name for a new model of Kalashnikov that is lighter and uses smaller calibre rounds (presumably the AK-74 ). This, it appears, is much favoured by the Taleban as the rounds can penetrate body armour, attracting a premium price of $1,100 – up from $700 a year ago. Against that, even the inflated price of $600 for a Kalashnikov seems modest.

Ghaith Abdul-Ahad also gives some idea of how the drugs trade works. With the farm-gate price of opium at $64/kg, and a conversion rate of 10:1 to turn it into heroin, a kilo of heroin in Afghanistan is worth $2,500; in the Tajik capital, Dushanbe, it is worth $5,000 – nearly ten times its original value. By the time it gets to London, even at current depressed prices, it is worth $100,000 on the street.

Much is being made of the reduction in opium cultivation, particularly by the MoD which takes pride in the report that in Helmand alone, cultivation declined by a third, to less than 70,000 ha.

This "major" drop in Helmand corresponds to the entire national decline this year of 34,000 ha. The dramatic turn-around here, says the UN, can be attributed to an effective mix of sticks and carrots: governor leadership; a more aggressive counter-narcotics offensive; terms of trade more favourable to legal crops; and the (related) successful introduction of food zones to promote licit farming.

The overall loss tends to reinforce an argument that the insurgency is under financial pressure, while the downturn in Helmand suggests that the counter-insurgency is beginning to show some, albeit modest, successes. Certainly, the UN supports this argument, recording that, in the first half of 2009, military operations destroyed over 90 tons of precursor chemicals, 450t of seeds, 50t of opium, 7t of morphine, 1.5t of heroin, 19t of cannabis resin and 27 laboratories.

It concedes that this has knocked out only a fraction of the Afghan drug economy but believes that the military action has increased the risks of drug trafficking, and created a deterrent for the future. Farmers are increasingly wary of retaliation, trading has become more discreet, and stocks are now buried underground. The risks/rewards balance is starting to tilt against drugs, says the UN.

However, this may be an over-optimistic assessment. While cultivation are has decreased by 22 percent, opium production is only down by 10 percent to 6,900 tons, as farmers increase their productivity. Traditional growers have only been able to produce about 10 kg of opium per hectare, while growers this year yielded a record 56 kg/ha – a 15 percent increase over last year’s already high figure of 49 kg.

And although the UN notes that the 800 tons drop in overall production has a notional retail value of around $8 billion in consuming nations, this is not a real loss. Afghanistan has been over-producing for some years and considerable quantities have been withheld from the market.

Furthermore, there are more powerful reasons for the drop in production. On the one hand, over-supply at the source – with the opium harvest still twice the size it was in the late 1990s - lower market penetration in user countries and greater competition from a wider variety of "recreational" drugs are pushing heroin and thus opium prices down. 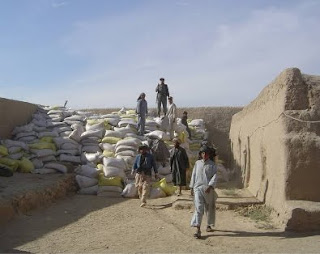 Another important factor is the high price of wheat in the region, which has forced poppy farmers in many areas to switch to wheat so they could feed their families, as income from the opium yield was insufficient to buy enough grain.

A Canadian development expert notes that, "It makes sense to grow wheat to the point of self-sufficiency," but then warns that 2010 may be a very different story. "We already see wheat prices starting to fall," he says, in which case, many farmers will return to opium growing. Perversely, the coalition handing out free wheat seed (pictured) and fertiliser, without taking any market regulatory measures, may be reinforcing this dynamic.

That notwithstanding, a recent disturbing article by Jean MacKenzie in the Global Post suggests that the contribution made by the drugs trade to Taleban funding may have been considerably over-estimated. One of the richest sources is the foreign assistance coming into the country, extorted from contractors carrying out development works, as a form of protection money.

To that extent, international donors, primarily the United States, are to a large extent financing their own enemy, a process that goes beyond mere protection money or extortion of "taxes" at the local level. It is reported that very high-level negotiations take place between the Taleban and major contractors.

Even at the local level, there are multiple reports of licit crops being taxed while Michael Yon reports on the bizarre situation where British troops protect the electricity generation station at Kajaki but are unable to protect the transmission lines. The Taleban, therefore, control the supply and are able to charge users for the electricity.

Nothing, therefore, in the current UN report or Sengupta's record of spiralling weapons prices would support a contention that the Taleban are under financial stress. In fact, despite the downturn in drug prices and the drop in production, it would seem that the coalition forces will run out of money far sooner than their enemy.