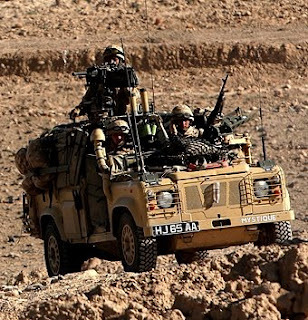 Much lauded by the media for his recent memoirs about his experiences as a Grenadier Guard officer, Patrick Hennessey has now been given space by Reuters to air his views about protected vehicles.

Under the heading, "When is the wrong vehicle the right vehicle," Hennessey chooses as his topical "hook" the recent death of Major Sean Birchall, the 169th British service person to die in Afghanistan since the start of operations in 2001 and the tenth to be killed in a Jackal. This he contrasts with the announcement that four families are planning to sue the Ministry of Defence over "the deaths of loved ones in the lightly armoured Snatch Land Rover in Iraq and Afghanistan."

Addressing the issue that similar concerns are being raised over the suitability of the Jackal as have been being voiced for some time over the Snatch, Hennessey springs to the defence of the vehicle, calling in aid his months on patrol in Iraq in the Snatch and even longer driving both on and off road around Afghanistan in the even more vulnerable WIMIK.

Interestingly, he describes the WIMIK as "the topless Land Rover largely unchanged since the Long Range Desert Group charged around North Africa in it in the Second World War and the vehicle the Jackal was brought in to replace." This does not aid the man's credibility. Not only was the Land Rover not introduced until 1948 (and not purchased by the Army until 1949), the primary patrol vehicle used by the LRDG was the 30 cwt Chevrolet.

That aside, Hennessey then launches into his main thesis, declaring that the public concern over military vehicles is at once understandable, praiseworthy and a little disconcerting. "It is understandable because grief is a terrible thing and grieving families will always want to try and understand why they have lost husbands, sons and brothers and praiseworthy because it is only right that societies should try and ensure that the men and women sent to fight on their behalf are equipped as well as can be."

It is disconcerting, however, because – writes Hennessey - "the argument always seems to lose sight of certain considerations; the devil, as always, is in the detail." 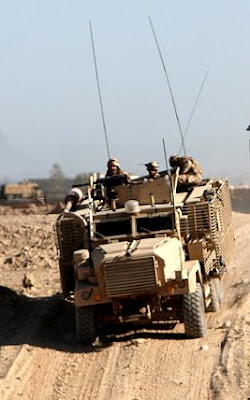 Indeed, the devil is in the detail, but the "detail" offered consists of imagining a Snatch Land Rover driving down the Strand. A few people will no doubt stop and look, some will point and a few will know what it is and wonder why it is there, but it will likely go mostly unremarked.

If, on the other hand, the exercise were repeated with a Mastiff (pictured), one of the better protected vehicles in Afghanistan, or one of the Warriors which have done such sterling work in Iraq, or even the British Army's most heavily protected vehicle, the Challenger 2 Main Battle Tank, then traffic would grind to a standstill as people dropped their shopping and either ran or stared.

Thus asserts Hennessey, protection, although important, is only one of many consideration for a commander, be it a junior one like I was, planning local area patrols, or a senior General working out what assets to use where. For all its vulnerability, he writes, I preferred the WMIK because I liked being able to see and hear and interact with people as we drove around. He also knows many who have a similar opinion of the Jackal and admire its all terrain ability. Soldiers also value being able to keep a low profile, a soft posture, something not exactly feasible in a tank.

Just on the issue of being able "to see and hear and interact with people as we drove around", this is grossly overstated. It may have its value for "reassurance" or "liaison" patrols, but for much of the time both the WMIKs and the Jackals are being used as gun platforms in combat operations or as convoy escorts, where the desired interaction is between the Taleban and a .50 calibre bullet. And, in any case, bristling as they are with weaponry, neither vehicle is exactly civilian-friendly. Petraeus had the last word on this. It you want to interact, you should dismount.

On the issue of protection though, whether he knows it or not, the man is simply parroting exactly the same lines on which the defence procurement minister Lord Drayson relied back in June 2006. Far from being original, Hennessey is thus offering the tired mantras that have long been discredited. 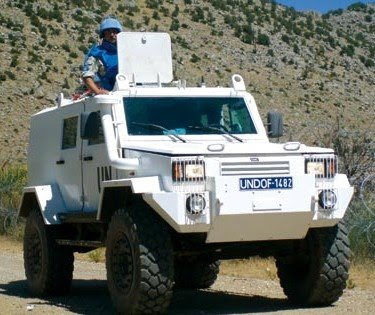 In his "argument" though, there is also a strong element of dishonesty – or ignorance. By contrasting the Snatch and the Mastiff, he is comparing chalk with cheese. Had he compared, say, the Snatch and the RG-32M, his argument would have fallen apart. The one is no more remarkable than the other, yet the RG-32M (pictured) has a high degree of blast and mine protection, far exceeding that of the Snatch.

There is also repeated the error which seems permanently embedded in the military consciousness – the belief that the British Army's most "heavily protected vehicle" is the Challenger. Against gunfire, that may be so, against mines and buried IEDs, that is not the case. It is relatively poorly protected and extremely vulnerable to such weapons. The RG-31, at seven tons, confers twice the mine resistance of the Challenger which is ten times heavier. And, as we are aware, troops stand three times the chance of walking away from an IED hit if they are in an MRAP, compared with a main battle tank.

In fact, he maintains, the men and women serving in Afghanistan would be best protected of all if they weren't there and we brought them all home: sometimes a degree of protection is rightly sacrificed for operational effectiveness.

What is ignored here is the influence of design – an omission we see so often. A well designed mine/blast protected vehicle need not be heavier than current patrol vehicles - and with openable top hatches, there is also a chance to "interact". The weight of the Jackal, for instance, is seven tons. That is comparable with the RG-31 (early marks) and not much less than the far better protected Ridgeback. As for the all-terrain ability of the Jackal, the next generation of MRAPs will largely provide for that need.

Buoyed by his own ignorance, however, Hennessey then asserts that, "laudable though public concern is, the only people who can make the call of what is and isn't operationally effective are the commanders on the ground."

At so many levels, the man is wrong. For sure, given a mission to perform and a choice of what is available in the vehicle pool, what to use on the day is a decision for the commanders on the ground. But as to what should be available, that is a decision made way above Hennessey's pay grade. And here, the "bigger picture" is paramount.

Where the UK is fighting an unpopular war and there is limited public tolerance of casualties, and where the Taleban are fully conscious of the PR impact of those casualties, there is an essential strategic requirement to keep deaths – and certainly unnecessary deaths – to a minimum. To do otherwise in the interests of notional operational effectiveness is to risk winning the tactical battle and losing the war, as public support is withdrawn. Therefore, "protection" is an integral requirement for long-term operational effectiveness.

Furthermore, this bleeds through into tactical decisions. Commanders, aware of the impact of an excessive casualty rate, have been forced to modify patrol patterns, and even operational doctrines. When only vulnerable vehicles are available to them, for instance, there is often a need to rely on airpower for support – which itself has an adverse effect on public sentiment.

Just as importantly, for an Army which often refers to the similarity between current operations and the LRDG in 1941-42 in the North African desert, it needs to understand that the tactical situations are very different. Here, it is germane to note that the motto of the LRDG was "Non Vi Sed Arte" - "Not by Strength, by Guile". The LRDG was the predator, relying on stealth and concealment to stalk its prey - and to provide protection. In a counter-insurgency context, the modern equivalent is the prey, patrols being observed by "dickers" from the very moment they leave their bases. In the absence of "guile", strength is needed - in the form of armour plate.

Nevertheless, Hennessey applauds the efforts of all those who seek to secure the best for the military and agrees with those who argue that politicians have not always honoured their side of the bargain by sending troops to war ill-equipped and under-funded. He remains wary, though, of tactical decisions being made in the courts at home and says he will watch the development of these cases with interest.

What maybe he does not appreciate is that the issue is not the tactical decision-making but the strategic, top-level choices made not by politicians but by the Army. If the Army hierarchy had been a little better at making those choices, and less imbued with the mantras which Hennessey so faithfully parrots, there would be no need for the courts.

The lesson that we need to take from this, however, is that Hennessey speaks with the authority of a soldier who "was there". In deference to that, we are supposed to accord some respect. But the fact remains that "being there" does not confer any greater knowledge or wisdom, when that experience is tainted by ignorance and dogma. "Being there" does not stop you "being wrong".