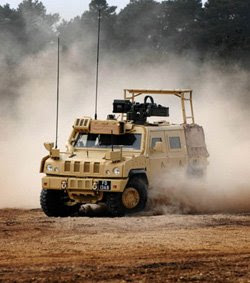 Announced yesterday on the MoD website, the first batch of Panther Command and Liaison Vehicles has been delivered to troops in Afghanistan, "complete with the latest battle-ready upgrades."

Behind the bland covering story, however, lies a tale of utter incompetence, deception and bad faith which, even by MoD standards, almost beggars description.

Not least, this vehicle was actually selected after a "rigorous" competition, which had started in 2001, with the "preferred bidder" being announced in July 2003, for a contract value "worth over £200 million".

That alone is remarkable as it has now taken almost the same length of time to bring the vehicle into service as World War II actually lasted, missing out entirely on a complete war – the counterinsurgency campaign in Iraq.

Yet, in the July 2003 announcement, it was hailed as the solution to the Army's requirement for enhanced speed, reliability, flexibility and protection for a wide range of users in combat or peacekeeping operations. It was also to, "provide support for the RAF Regiment". Specifically, though, it was to "play a key role in the Joint Rapid Reaction Forces by providing versatile, airtransportable vehicles, which will be among the first deployed in a crisis and will spearhead the way for troops in combat or peacekeeping operations."

What was also remarkable – although not apparent at the time – was the extraordinary lengths to which the government went to conceal its origin. The competition winner was announced as Alvis-Vickers and the vehicle was actually described as the "Alvis Vickers Limited Multirole Light Vehicle", and the government continually sought to give the impression that it was being manufactured in the UK.

In fact, the Panther was an untried Italian design called the LMV (Light Multi-role Vehicle), developed as a private venture by the military division of Iveco, based in Bolzano, Northern Italy which, by late 2002, had funded only ten prototype vehicles. Yet, even though the vehicle was to be wholly built in Italy, and then only fitted with British Army requirements in the UK, the contract was described as "a good result for the United Kingdom AFV industry."

The actual order came on 6 November 2003 when defence minister Adam Ingram announced a contract worth £166 million (including VAT) with Alvis Vickers Ltd, "for the manufacture of the future command and liaison vehicle (FCLV)". 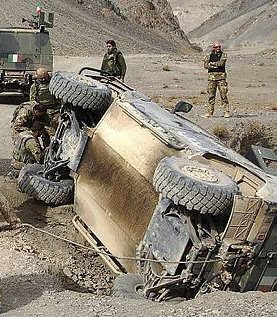 By then, ongoing work on armoured fighting vehicle rationalisation had led to a review of the initial requirement for vehicles. The number to be procured was "revised" – i.e., reduced - ending up at 401 for the price of £166 million, equating to £413,000 each, with an option for 400 more. The RAF Regiment was not to receive vehicles from the initial fleet.

The third remarkable issue was that, at this time, the British-occupied southern Iraq was hurtling towards an insurgency and here was a vehicle which would "offer protection against small arms, blast and anti-personnel mines," ostensibly exactly the type which would be invaluable in dealing with Iraqi insurgents.

However, this was not to be. Described by the minister in July 2003 as a replacement for "a mixed fleet of ageing vehicles which were acquired as a stopgap following the withdrawal of the Ferret Scout Car" the Panther was to perform the command and liaison role, taking over from FV430 series vehicles, Saxons, Land Rovers and combat vehicle reconnaissance (tracked) fleets.

As such, the MoD did not have its eye on the emerging insurgency in Iraq. The Panther was to "play a key role in the Joint Rapid Reaction Forces" for the Nato and EU rapid reaction forces, and was never intended for counter-insurgency work. Thus, the ministry was quite content with an in-service date of 2006. That timetable fitted nicely with the plans for the expeditionary force, which was not due to become operational until 2010. As for Iraq, a month before the order had been signed, second-hand Snatch Land Rovers had been despatched.

The tragedy here was that, when the selection competition had started in June 2001, the Panther – aka the Iveco LMV – had not even been on the shortlist. As we recorded in a series of posts written in 2005 (here and here), the contenders were the RG-31, the RG-32M, the Alvis Scarab and the French-built ACMAT "Ranger", otherwise known as the VLRB. 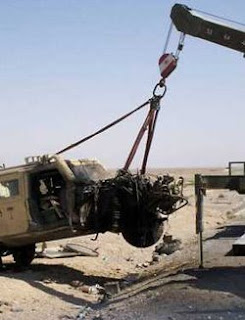 It was not until after the shortlist had closed, in September 2001, that the MoD, in breach of its own rules, introduced the Panther into the competition, clearly motivated by an ambition – never openly admitted – to purchase a standard design for the European Rapid Reaction Force. And having placed the vehicle in what was now a rigged competition, the MoD went on to select it. And, as we subsequently found out, the MoD "desk officer" behind the programme went on to work as a consultant for Iveco.

Either of these vehicles would have required modifications to suit the command and liaison role, as indeed did the Iveco machine but, unlike the Iveco, these were already in production and available at short notice.

The ironic thing is that this is exactly what is now happening with the Panther. Fitting it out as a command and liaison vehicle has been problematical, not least because of the extremely limited internal space, with the Bowman command radio reducing the seating to three and overloading the air conditioning system. Thus, the vehicle has been stripped out to restore it to a four seat specification and, with theatre adaptations, is now to be used as a patrol vehicle, with some command capability.

Thus, while not originally intended for them, one of the first units to be equipped in Afghanistan is the RAF Regiment. Other vehicles are to go to the Close Support Logistics Regiment. These choices are interesting. With its high centre of gravity, made higher with the fitting of a remote weapon station (RWS) and other equipment, the Panther has been reported as extremely prone to rollovers. From this aspect, the roles chosen are probably the least demanding. 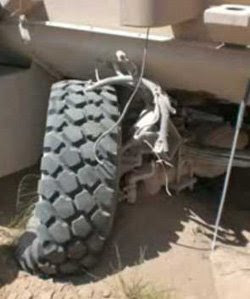 However, the weapon chosen to mount on the RWS is the 7.62mm GPMG, rather than the .50 cal, undoubtedly influenced by the weight of the latter, which would make driving the Panther even more perilous. This means that, compared with the Wimik or Jackal, the Panther is under-armed, the installation being officially described as a "self-defence weapon". That effectively limits the Panther's use, ruling it out for aggressive patrols or as a weapons platform.

Despite all that, the Panther is clearly better-protected than many vehicles that have gone before, and is an improvement on the Snatch, the Wimik and the Vector (but not the RG-31 or 32M). With the Spanish and Italians using them in Afghanistan, there is now good evidence that they are saving lives.

Even this will be at a cost though – if only financial. Rather than employing deflection as the main protective measure against mines and IEDs, Iveco have used modern automotive "crumple zone" technology to absorb blast energy, sacrificing components to keep the crew safe in their protected cell.

This means that the vehicle is heavily damaged by mine and IED strikes, and is often a write-off after an attack. By contrast, the RG-31 and similar – with their deflection technology - often need only minor repairs (above right) and can be returned quickly back to service.

Thus, we have yet another example of the MoD procurement ethos: spend more for less and get it later, with operating costs that are considerably higher. In that this purchase was as much motivated by the European agenda as innate MoD incompetence, we also have a classic example of how the combination of EU politics and procurement inefficiency can made a bad situation even worse.

The only consolation is that the option for the extra 400 vehicles is not to be taken up. But when the Taleban have destroyed the existing stock, we can look forward to next episode of MoD blundering, for which – in truth – they really do not need European assistance.