Straws in the wind 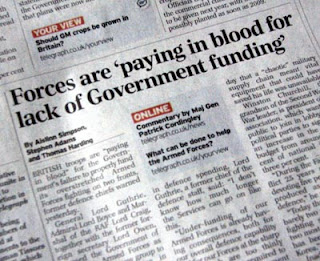 Predictably, the print media today follows up yesterday’s launch of the UK National Defence Association but, with the issues having been well-rehearsed on the web, one almost gets a sense of déjà vu.

It is a measure of the level of debate, though, that some of the papers pick as their headline a comment made by former Tory MP Winston Churchill, asserting that, "We cannot continue to expect the Armed Forces to pay the price in blood for the underfunding of the military today."

The Guardian, however, is more direct, with "Military chiefs demand more cash", echoed by The Daily Mirror which trumpets: "Military chiefs call for cash". The Times contents itself with, "Retired military chiefs join forces to battle for a bigger war chest" and the Independent – which has been so vocal about the "military covenant" - is silent, choosing to ignore the issue.

But, while most of the papers do cover the story, very few seem to have editorialised, one of the few being The Times which focuses the coverage more tightly, arguing that, "Spending for frontline troops must be increased".

Interestingly, this was not exactly the specific line that Guthrie conveyed – he and his colleagues were arguing for global increases in defence spending - but the Times leader instead complains that, "The balance of spending is badly skewed," going on to argue that, "What is urgently needed now is better support for frontline troops."

More in tune with the Demos report, it notes that the bulk of the money is committed to costly long-term projects, pointing out that:

Strategists argue that commitments must be made decades in advance, and that since it is impossible to anticipate the needs of a modern army or navy in 20 years' time, options must not be jeopardised. Increasing defence spending at the expense of domestic programmes is electorally unpopular. And since the "fat" has repeatedly been trimmed, there is all the more urgency for monitoring - and, if necessary, scrapping - of large projects.

That The Times is signalling the scrapping of large projects is possibly quite significant. Often seen as close to the New Labour "project", the paper is sometimes credited with an inside track. Therefore, this "suggestion" may be something more than the invention of the febrile mind of a leader writer, and be signalling a shift in government policy.

Certainly, we saw something of a shift in the recent announcement of the purchase of additional Mastiff (MRAP) protected vehicles, funded directly from the Defence budget. This, we felt, reflected a new realism about the need to ensure exactly that which The Times is advocating – better support for frontline troops.

This also brings into high profile Gen. Dannatt's recent speech at the International Institute for Strategic Studies - one part of which we highlighted earlier - now seems to have considerable importance. Buried towards the end, and given no coverage by the media, he said:

We also need to radically rethink the way that we think about our equipment. We need to start from the bottom by looking at equipping the man first and building the system around him. Too often we have been seduced by high technology, sometimes without really understanding what it can deliver or how it can improve our effectiveness. I would like to see us spend more programmed money in getting the very lowest level right – and, I have to say, we have made great improvements here recently. This will need to manifest itself in buying in bulk those capabilities that we now rely on in our medium scale operations. After all, which government is going to send its troops into harm's way without the best equipment available?

There are other indications that priorities are changing, with the recent urgent procurement of Hermes 450 UAVs - without waiting for the full "Watchkeeper" package, with all its bells and whistles, and the delivery of the Reaper UAV to Afghanistan. Furthermore, with an announcement of additional MRAP vehicles imminent, and some hopes of extra helicopter support, this suggests that the MoD priorities may be centring on those three areas: protected vehicles, UAVs and helicopters.

If that was the case, it would represent a major turnaround from even last year, and perhaps a victory of Des Browne and his advisors, as well as the current CGS Air Chief Marshall Sir Jock Stirrup – all of whom are known to be advocates of better support for current operations.

That leaves, however, the question which – if any – of the "large projects" is most at risk, in order to fund this new realism. The Times identifies the carriers at £3.9 billion, the 150 Joint Strike Fighters at £10 billion, the Eurofighter programme, and the Type 45 destroyers. It does not mention FRES though. Possibly, with that latter project having the lowest public profile – few journalists even able to tell you what it is – the axe might fall here, with compensation offered by way of the protected vehicles that are to be procured.

Such are the straws in the wind though: Dannatt, the Demos report and now The Times - plus much else – that the possibility of a major shift in defence policy seems to be too strong to ignore.