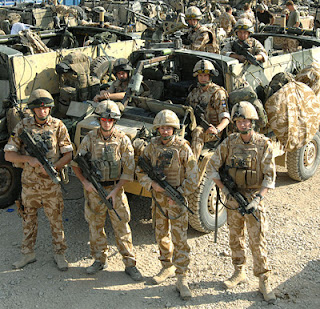 The MoD website tells a tale of how alert British soldiers in Afghanistan defeated a Taliban suicide attack on their convoy as it was returning to base.

The soldiers, from the 473 Special Observation Post Battery, 5 Regiment Royal Artillery, were heading back to the camp in Gereshk after a reconnaissance mission when a white Toyota Corolla suddenly pulled out and attempted to drive into their convoy of Pinzgauer vehicles.

Suspecting a suicide car bomber – correctly as it turned out - the first Pinzgauer swerved to avoid the car and the top cover sentry, Corporal Lee Wilbor, fired a single shot through its window, causing the driver to collapse at the wheel. But the Toyota carried on, swerving erratically into the path of the rear vehicle, whose soldiers opened fire causing the car to veer out of the way before it dramatically exploded.

The patrol leader, Captain James Ashworth (son of John Ashworth, of "Save Britain's Fish" fame), later said that his first thought was "what is this guy up to?", as the local traffic usually pulls over. He then shouted a warning and his top cover sentry, Corporal Wilbor, "fired a single well aimed round". The rear vehicle then opened fire on the target and the bomb detonated. Luckily the car was between our two vehicles and they were sufficiently far apart from the blast not to sustain any serious injuries.

Despite the closeness of the blast, it caused only slight damage to the vehicles and some of the patrol sustained minor blast injuries like nose bleeds. Unfortunately, an Afghan motorcyclist who had been trying to pass as the bomb was detonated, was not so lucky. Catching the full force of the blast, he had died instantly. 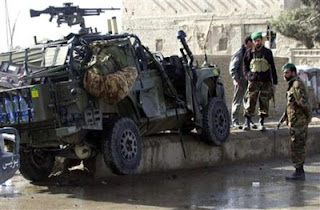 This type of incident, however, is all too common in Afghanistan and is redolent of the attack in Kandahar on a Royal Marine Commando WIMIK in December 2006. Then, three Marines were injured, one seriously, and a number of Afghan civilians were killed in the ensuing gunfire from surviving Marines who thought they were under attack from Taliban gunmen.

The difference between this and the latest incident, however, is that that the crews in the latter survived with only minor injuries and the only civilian casualty was caused by the suicide bomber. That explained why the media gave considerable coverage to the Royal Marine incident, but there has also been some limited coverage of this incident, in The Daily Mirror (which claims an "exclusive", although publishes on-line only) and in some of the regional newspapers. 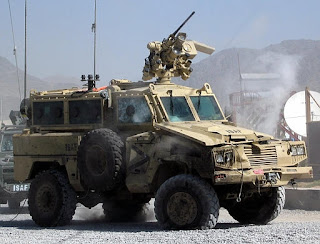 However, the incident raises another point, one which we rehearsed when the Royal Marine WIMIK was struck – and many times since – the fact that the British Armed Forces are still using dangerously vulnerable vehicles, which cannot protect them from IEDs – unlike the Canadian RG-31s, the picture of which we have seen before.

Although it is interesting to note that the Pinzgauers in the picture have side armour sheets attached to them, these vehicles, if anything, are considerably more vulnerable than WIMIKs, especially when it comes to mine strikes and buried IEDs.

That notwithstanding, the crews survived the attack and this highlights an important dimension to the debate about better armour. Arguably, the top sentry in an open-topped vehicle would have had better "situational awareness" than men hunkered down behind layers of armour and was thus – as events have demonstrated – well positioned to detect and take action against a suicide bomber.

On the other hand, had the top gunner failed to intervene, it is unlikely that the crew would have survived uninjured whereas the crew of an armoured vehicle might have. 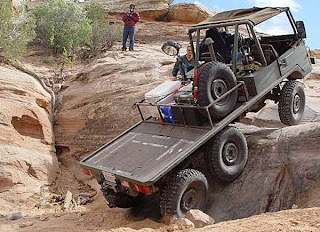 This, though, is not the full extent of the issues which need to be taken into consideration. The vehicles attacked were part of a reconnaissance unit, the duties of which take it into rough terrain, for which the cross-country performance of the Pinzgauer is admirably suited. A MRAP-type vehicle such as the RG-31 might be less suited this role. One could, therefore, be trading better protection for worse off-road performance, the lack of which could compromise the mission capability.

Where the balance of advantage lies in any particular case is impossible to determine without better knowledge of the specific factors but, if dangerously vulnerable vehicles are to continue in use, the Army needs to make the case that missions would indeed be comprised by better armour. So far, that case has not been made.

Thus, in all respects, we must indeed regard this latest incident as a lucky escape. But the Army should not be relying on luck alone.