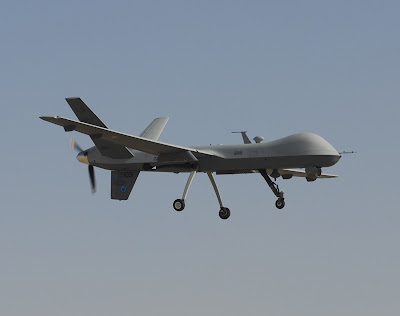 Well, not so grim, unless you happen to be a Taleban in Afghanistan – the first of the RAF's Reaper Unmanned Aerial Vehicles (UAVs) have arrived, (rightly) hailed as "Britain's most sophisticated unmanned surveillance system". 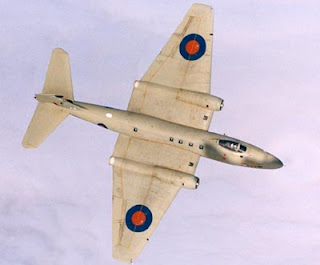 Operated by 39 Squadron, which was the last unit to fly Canberra PR9 surveillance aircraft, the equipment may be very different but their role is the same – providing all-weather, intelligence for commanders and ground forces, now grandly named "Intelligence, Surveillance, Target Acquisition and Reconnaissance" (ISTAR). It is not only defence expenditure which is undergoing inflation, but titles as well.

That aside, the procurement is another "success" for the Urgent Operational Requirement (UOR) system which has brought the Reapers into the field in a mere 15 months. In MoD terms, this is roughly equivalent to Star Trek's USS Enterprise doing Warp 9 – perhaps Drayson's parting gift to the troops. 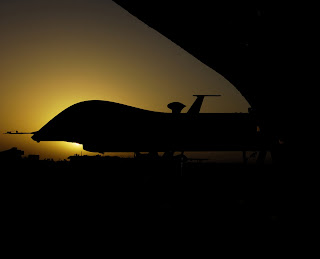 On a day when Guthrie and his merry men are bitching about underspending and "overstretch", this also represents a real investment is useful technology and a significant enhancement in capability.

With the three machines planned, each with a 42-hour endurance in the surveillance mode, they will be able to provide genuine 24-hour coverage over operational areas when needed. They will thus take much of the load from the ageing Nimrods, which are currently providing much of the ISTAR function.

Had these, or their predecessor, the Predator, been available earlier, perhaps we would not have had the well-rehearsed problems with the Nimrod. 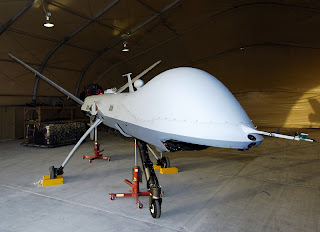 Although the Reaper in RAF service is currently unarmed, it is capable of being armed and the MoD is investigating arming options. Potential weapons fit includes GBU-12 Paveway II laser guided bombs, Hellfire air-to-ground missiles and even GBU-38 JDAM bombs, making them formidable attack weapons.

The betting is, however, that this development will receive scant attention from the media which is happy to report on shortages of kit and its inadequacies, when it suits it, but rarely (as with the Warriors ) reports the good news. We, on this blog – as far as we can – will continue to report both.

Reaper photos courtesy of MoD. Click the pics to enlarge.