A sense of drift 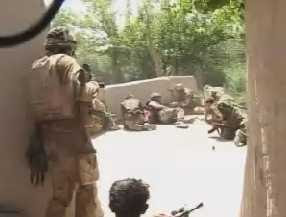 We are told that we should take more interest in our operations in Iraq and Afghanistan, and that our troops feel their efforts in these campaigns is neither understood nor appreciated.

It was almost with a sense of duty, therefore, that one watched yesterday's Panorama programme, "Taking on the Taleban - The Soldiers' Story". This was an account by reporter Ben Anderson, who kept a diary of his time with The Queen's Company the Grenadier Guards, dominated by footage of a battle with the Taleban for control of the Green Zone - a solitary strip of fertile land about a mile wide that follows the Helmand River.

With two companies of Afghan National Army (ANA) soldiers, we saw the Grenadier Guards as they headed into the Green Zone with the aim of clearing the village of Kakaran and holding it.

If one was to summarise the account (or the main part of it), the bare bones of the narrative were that the troops occupied the village and were attacked by unseen Taleban. Holed up in a compound, they called in an Apache attack helicopter which apparently fired a Hellfire missile in the direction of the enemy positions, and managed to kill six ANA soldiers.

The soldiers then moved into the compound that had been hit and, after taking more fire from the Taleban, over a protracted period, an air strike was called in. The first bomb missed and another strike was called. This time there was silence and the fight was finally over. Three compounds had been badly damaged, one had been flattened and as many as 15 Taleban "may have been killed". 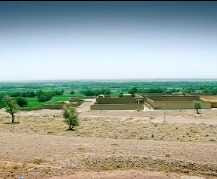 Almost eight hours since the detachment had come under attack, the soldiers walked wearily back to their patrol base, and the Taleban moved back into the compounds that had been fought over and now vacated by the troops.

We are far from alone taking from the programme a sense of futility and confusion, wondering what had been achieved, lacking any idea of the "bigger picture" that the programme did not, and did not seek to show.

For that, we can get some sense from the MoD website which, on 25 October was showing pictures of a pacified Sangin (below), claiming that the Taleban had been comprehensively defeated in the area.

This, of course, was after the intervention of the recently arrived Warrior MICVs - something which has received minimal attention from the media. 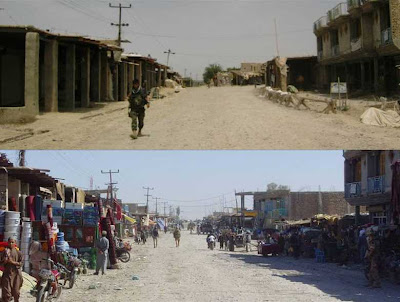 In fact, apart from yesterday's programme, coverage of the Afghanistan campaign in the British media has been virtually non-existent. Even the MoD seems to have given up, the 25 October piece being the most recent to have been published on the website.

As for Iraq, actual coverage of events since the withdrawal of 4 Rifles from Basra Palace on 4 September has similarly minimal. Ironically, today we get a wide-ranging analysis of British strategy in southern Iraq, but from Pajamas Media, written by PJM Sydney editor Richard Fernandez.

A thorough analysis this might be but, written in Australia, it does not pretend to be on-the-spot reporting. For that, we must rely on a piece published in The Mail on Sunday, written by SAS veteran Andy McNab "from the soldiers' point of view". Entertaining, it might have been. Informative, it was not.

What this all amounts to, therefore, is that we have substantial number of troops committed to two major operations in war zones and we have very little idea at all about what is going on in either theatre. This is not a matter of not caring, or not being interested. Simply, with the best will in the world, it is virtually impossible to get any accurate picture of what is going on.

Small wonder, therefore, that the public shows little interest. No one is offering a narrative, or anything of substance, in which it is possible to get engaged. All we are thus left with is a sense of drift and futility.