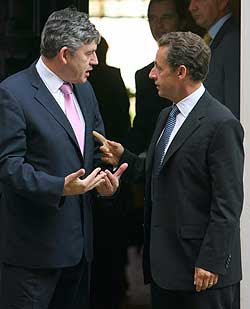 Gordon Brown's enthusiasm for the new EU treaty – or at least his stubborn resistance to holding a referendum on it – has the hallmarks of a rabid Europhiliac. But, according to The Financial Times he is by no means buying into the whole package, reportedly resisting France's attempts to rejoin Nato as a full member.

Full membership of Nato is at the heart of Sarkozy's newly minted Atlanticism, and a central part of the pitch he made in a speech to a joint session of Congress during his visit to Washington last week.

However, at the same time, he is making fuller participation conditional on the European Union acquiring a greater capacity to deploy troops and manage crises, alongside Nato, which is apparently causing concern in Downing Street. Senior officials in Paris interpret this as a deep-seated reluctance in Gordon Brown's government to adopt any big European initiatives.

The suspicion is probably well founded, as any further engagement by France in Nato is undoubtedly motivated by an ambition to become the lead European power, leading to the prospect of a Nato run by France.

Sarkozy, though, has invested a great deal of political capital in this scheme, intending to make defence one of the main priorities for French EU presidency, which starts in the second half of 2008. He wants, we are told, to kick off a debate in the summer about ways of boosting the EU's defence capabilities, with decisions by the end of the year.

This will have enormous symbolic significance as it will mark the tenth anniversary of the "ground-breaking" defence agreement in St Malo in 1998, between Chirac and Tony Blair, launching the European Rapid Reaction Force (ERRF), when there are high expectations of taking European defence integration to the next stage.

Brown's reluctance, though, seems more than skin deep. The expected defence "cuts" are an indicator, especially if they are seen more in the context of a re-prioritisation of defence policy.

If they lead to a greater focus on supporting current operations, and a reduction in the expeditionary capability which lies at the heart of the ERRF concept, then it will be a significant distancing not only from the European “defence identity” but from the legacy forged by Blair in the early Europhiliac phase of the New Labour government.

This may explain why former CGS General Guthrie has come out of the woodwork, demanding a commitment to greater defence spending. Known to be strongly supportive of UK involvement in a Euro Army, part of his tenure as CGS - from 1997 to 2001 - coincided with that of Europhiliac Geoff Hoon as defence secretary. They pair between them did much to drive forward the European defence agenda in the British forces.

The result was that, however, with the commitment to the ERRF, British defence policy was split between the Euro-centric expeditionary concept and the need to support current operations, alongside the United States. This the UK could not afford, without substantial extra spending which was not forthcoming. That tension created many of the financial stresses that are current affecting defence.

If the policy realignment is leaning in favour of current operations – as seems likely – the only way Guthrie can rescue anything of the European agenda is to force more money of the Treasury, which seems extremely unlikely. But that does not stop him trying.

This is certainly the way it looks, and it does not make sense.