Getting to the heart of the matter (not) 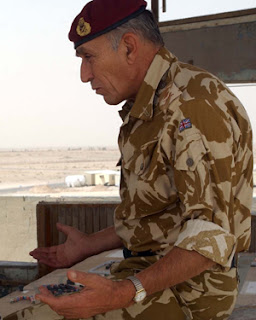 In an increasingly fraught political environment, it is perhaps significant that the transcript of Tuesday's Jackson interview posted on the unofficial Army forum elicited comments not about the substance of his comments but on his incidental remarks about Army morale.

Yet, the core of Jackson's responses, which he himself flagged up as "important", was far more profound than even the interviewer, John Humphrys, seemed to realise. In fact, without him realising it, Jackson was sketching out the reasons why the Armed Forces are under stress and why there are such problems with "underfunding".

To that effect, the essence of Jackson's thesis was that there is not enough money "to give the Armed Services proper conditions of service and to also look forward into the equipment programme", the latter "to make sure we're paying the right sort of premium into our national insurance policy on defence."

Jackson then elaborated on this by telling Humphrys that the money "may not be enough to do the things which we do now and the things which we may have to do in the future," cementing in the issue which we have identified on the blog – the focus on the "future war" scenario.

It was there that Humphrys lost it. Responding with the question, "are we trying to do too much?" he failed to establish first what it was that we "may have to do in the future" – the assumptions on which the "equipment programme" was based.

Yet again, though, Jackson gave him a cue, referring to the need to take into account, "strategic circumstances", further elaborating with the "important point":

…that the analysis must start in logic, from what it is that the United Kingdom thinks it's part to play in a very uncertain and difficult world. You’ve got to get that analysis right because from that then flows the tools you need, and they’re not all military tools either, but the tools you need to pursue the strategy which you have decided to adopt. That's the right way round.

The only response Humphrys could offer was a "hypothetical", and "ludicrous" notion – an invasion of North Korea – as an example of what we could not afford, completely failing to ask what we could afford, or what we are actually planning to do in the "affordable" bracket.

Yet again Jackson offered another lead, telling Humphrys that you could not "decide what you wish to afford until you've done that strategic analysis." Then, said the former Chief of General Staff, "you start to make some judgements." But Humphrys could not get the point and abandoned the field, leaving the issues hanging, entirely unexplored.

But the point was – and is – that the military (and, presumably, the politicians) must have done their "strategic analysis". Whether they have come to the same conclusions is moot but, on the basis of their joint or separate analyses, they must have some ideas as to the equipment required and the costs involved. And Jackson, at the very least, has concluded that we cannot afford this and maintain the current operations, and support all the other commitments (including improving conditions of service), out of the current budget.

From this we can conclude that – tentatively at least – the current operations and some if not all of the other commitments would be affordable if we did not have the future to worry about. And from that, we can infer that the essential problems of "overstretch" and all the rest stem from the need to fight (or prepare for) not two wars – Iraq and Afghanistan – but three, the third being the "future war".

As to what that "future war" might be, we have no way of knowing. But, as pointed out in an American military manual:

... we must face one absolute certainty: any projection will prove faulty. Despite our best intellectual efforts, the future will remain unknowable. Between now and the focus of this study, the year 2010, humankind's innumerable decisions will interact to form a future far beyond our powers to predict. It would reveal the greatest hubris to claim absolute insights on such a dynamic, multidependent future.

The manual then goes on to say:

This limitation is especially true concerning war. Any projection of future war must contain implicit assumptions of time, enemy, location and purpose. We must know when the war occurs in order to project what kinds of technologies might be available. We must know the purpose of the war in order to forecast what level of effort the Nation will dedicate. We must know the enemy in order to build the most appropriate strategic campaign, addressing both offensive and defensive centers of gravity. Finally, we must know the location of the war in order to define the types and numbers of operational targets. All four factors will interact to define the nature and conduct of any future war. However, because none of the factors are knowable in advance, any vision of future war will be severely limited.

The point, however, is that not only do we not know the unknowable, we do not know what assumptions are being made, or by whom, whether there is general agreement or, if not, what the boundaries of the disagreements are. In effect, therefore, we are being told – by Jackson and many others – that we need more money for an equipment programme to fight a war in an unspecified location (or locations), at some indeterminate time in the future, against an unknown enemy or enemies, with undefined capabilities, all for a purpose that has not been stated.

Sympathetic though we might be to the broad proposition that we must prepare for the future – especially as the lead times for the procurement of new weapons is so long – to accept the lack of detail on offer is simply to agree a blank cheque, drawn on the taxpayer, with no upper limit.

Not is it any use relying on past and even the most recent defence reviews – any assumptions on which they were based have long since been invalidated. But neither is it possible to glean any coherent view from such limited debate that does occasionally percolate into the public domain.

Central to current thinking, we know, is the need to develop an expeditionary capability – but that still begs the question of who are we like to fight and where, with all the other imponderables. We hear also demands for a "balanced force" without any real idea of what such a force might be – with hugely varying opinions as to what constitutes "balance".

Then, within the recesses of the defence establishment, we also hear articulated the idea that the Armed Forces must maintain a ability to deal with a "technologically equivalent" enemy, usually but not necessarily within the context of (unspecified) coalition operations. Yet no one, it seems, is able to offer a credible scenario as to where in the foreseeable future we might meet this enemy, and in what possible circumstances, and with which coalition partners. And whether our partners are working within the framework of Nato, the EU, US-led forces or some other grouping will have a considerable influence on our equipment programme.

On the other hand, our current wars in Afghanistan and Iraq – each of them different but with some common characteristics – apparently require entirely different force structures, equipment and tactics from the "future war" scenario for which such a huge resources is apparently required.

If we accept, however, the premise that the "future war" will be different from current wars, then we need that separate capability. But if the premise is wrong, and the future is a series of counter-insurgency operations, more or less similar to the current campaigns, then we may be preparing for the wrong war and wasting our money. In that latter scenario, there is considerably less pressure of the defence budget than is made out.

So much is guesswork, and always will be. But what is also guesswork – and should not be – is our estimation of what strategic analyses have been conducted, and the nature of the assumptions that have been made on the basis of those analyses.

Only with that knowledge can we ourselves judge whether we, as a democracy, are prepared to find those assumptions, or disagree with them and demand a different direction.

A possible counter to that is that war is so complex that it must be left to the military and experts to decide but, as the manual cited above states, "As we look to the future of war we must face one absolute certainty: any projection will prove faulty."

Faulty or not, in a democracy we are entitled to know in vastly more detail what projections are made in our name and have the opportunity through genuine debate to accept or reject them. Humphrys could have pursued that debate, but so uncomprehending of the issues was he that Jackson's comments went straight over his head. Getting to the heart of the matter we are not.