In November last year, we immediately covered the tragic death of four Army personnel in a bomb incident on the Shatt al Arab pontoon bridge in Iraq, while they were travelling by boat between Basra Palace and their base at Shatt al Arab hotel. We have, however, delayed our own response to the Coroner's inquest report on the incident, to allow time for some thought and reflection.

The need to do so comes in part from a review of our own coverage in November 2006, when the incident happened, where I was quick to pin the blame on the then (and current) secretary of state for defence, Des Brown, for failure to equip personnel with protected vehicles, which might well have saved their lives.

To hurl accusations against politicians is easy - and, to an extent, that is what they are there for – but to retract accusations is not. But, in this instance, conscience dictates that I admit that my criticism was misplaced. I was wrong.

The reason why I can be – and need to be – so unequivocal is that the finding of the Coroner's Inquiry itself was unequivocal, as indeed was the father of one of the deceased, James Nowak, a former Royal Navy serviceman, who labelled the incident "a cock up".

This made into the headline The Daily Telegraph, the report of which recounted how the stricken boat had not been equipped with electronic counter-measures (ECMs) which could have stopped the detonation. This was despite the fact that there was enough equipment in theatre at the time, but it was not fitted to the boat.

What also emerged from the Inquest was the view that the bridge, under which the bomb had been placed, should have been searched and cleared before the boat passed underneath it - but it was not. Coroner Andrew Walker said this amounted to a "serious failure to follow basic practice". Major Ed Pope, of the Royal Logistics Corps, agreed with the bleak assessment.

This was recorded in an earlier report, recounting evidence that river travel had been considered the safest method of transport between the bases but on this occasion other units did not have any spare men to ensure the bridge - a known danger spot - was secure before the boat passed under it, even though the waterway was used all the time to transport military staff.

However, after the incident, resources were made available to ensure that the bridge was properly searched and cleared, and kept under guard.

At three levels, therefore, there were significant and demonstrable failings by the Army – the failure to anticipate that the narrow gap at the pontoon bridge was a possible danger spot, the failure to fit EMC and the failure then to guard and clear the bridge. No secretary of state for defence could be held responsible for those failings, especially as the Coroner branded that latter error "a serious failure in basic operational procedures". 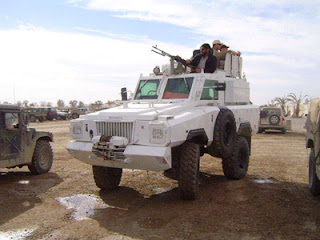 The level at which we initially approached this incident, however, was on the basis that a highly vulnerable boat should not have been used, with personnel transported by protected vehicle. That, despite the controversy surrounding it, the Blackwater security company have been able to convey thousands of personnel down the deadly route from Baghdad Airport to the "green zone" in the centre of Baghdad without a single passenger being killed is adequate testimony to that thesis.

At that time, in November, there were no such vehicles in the British sector – with Blackwater using the Mamba protected vehicles (above right) that had previously been disposed of by the Army. But, the sale was initiated by the Army and, having been appointed only in May 2006, Browne had decided to acquire Mastiffs in August. He could hardly be held responsible for the lack of armour in theatre when the four personnel were killed in their boat, that November.

In a very real sense, therefore, the Army – as a corporate body – was partially responsible for the death of these personnel. The Coroner in fact stated that the killing had been "avoidable", a view that was highlighted in The Times report. 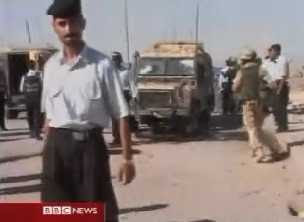 That report also listed other, what it termed, "military failings", including the death of Fusilier Gordon Gentle, 19, in 2004, the killing of Philip Hewett and two other soldiers when a bomb destroyed their Land Rover, "which did not have an electronic countermeasure device" and six Military Police who were killed in 2003 when a mob besieged a police station. An inquiry found command relationships to be "confused" and communications poor.

The report also included the death of Sergeant Steve Roberts, who was shot at a checkpoint in 2003. He had been ordered to give up some of his body armour because it was in short supply. His pistol jammed as he tried to defend himself and he had been shot by a gunner from his own tank.

But that last incident, during the inquest in January of this year, had led to calls for then defence secretary Geoff Hoon to resign and provoked an excoriating commentary from the very same Coroner, Andrew Walker, who declared, "To send soldiers into a combat zone without the appropriate basic equipment is, in my view, unforgivable and inexcusable and represents a breach of trust that the soldiers have in those in Government."

That commentary, at the time, was picked up widely by the media, with no end of trenchant leaders about the failures of government – over the death of one soldier, who had in fact been killed by one of his own men in a "friendly fire" incident. 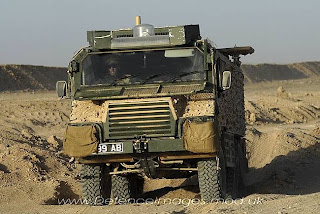 But, by contrast, where Army negligence - in what could also have been called a "breach of trust" - resulted in the death of not one but four personnel, Walker's comments appear curiously muted. As for the media, editorials condemning Army negligence, there were none.

Yet, when you add up those listed by The Times, the deaths arising from Snatch Land Rover incidents, those soldiers killed in WIMIK Land Rovers and in Pizgauer Vectors – the Army's choice of vehicles, the number of troops killed in which Army decisions were a contributory factor must be quite substantial, perhaps 60 or even more "avoidable" deaths.

Here then lies a rather glaring contrast. Where there is perceived to be – rightly or wrongly – a political liability for the death of a soldier, criticism knows no bounds. When justified, this is as it should be. But when, it seems, the Army bears equivalent or greater responsibility for the deaths of its own, through its failings, there is very little adverse reaction.

Are we seeing double standards here?