Firing in both directions 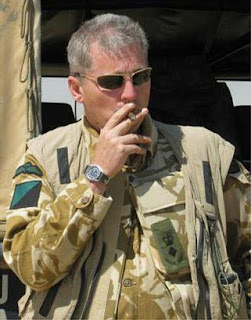 The now infamous Colonel Tim Collins (retd), whose eve of battle speech before the invasion of the Iraqi war brought him international attention, has been fulfilling his newly assumed role of an all-purpose "renta-quote", this time sounding off in an interview for the Parliamentary Monitor about politicians.

But, as to the failures of the Labour administration, he adds: "One of the problems has been that there has been no effective pressure from the official Opposition party because they haven't formulated anything like a clear foreign policy of their own. It's just incompetent.”

He adds that "The Conservatives have approached me to support them and I have no regrets about not doing that. I wouldn't support them unless they came up with a foreign policy, and I see no evidence of that happening."

Warming to his theme, he then continues: "At the moment the Tories are under pressure to show how they differ from Labour, but I believe that in the area of defence and foreign affairs they are really missing a trick. If they had a coherent foreign policy they could demonstrate clear blue water between themselves and the government."

Although we do not always find ourselves agreeing with Collins, we note his views on the Conservative Party, and have expressed something not dissimilar, on one or two occasions - or three….

It is easy to blame governments for their failures – and indeed, in a functional democracy (what is left of it), it is important that we do. That is the function of Her Majesty's Opposition, but it should not only be undertaken as an exercise in point-scoring.

Focused opposition, based on forensic analysis of the government's failures and inadequacies, can be a constructive process which can lead to improvements which the government had not considered, or was resisting. That, of course, is best achieved within a policy framework, which acts as template, by which others' activities that can be measures. And is discerning that the Conservatives are a policy-free zone, Collins is at least right in withholding his support and in noting that they are "really missing a trick".