The sharpening of knives 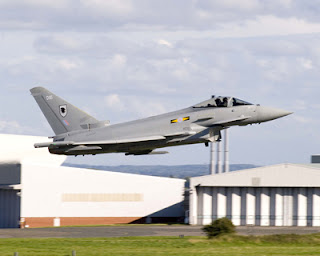 To any serious defence analyst – and even this blog – the signs of impending defence cuts are unmistakable. Something is in the wind, as we remarked last Friday.

And so it is that The Sunday Telegraph today headlines, "MoD in £1bn battle to stay within budget", while The Sunday Times has, "MoD planning massive cuts to plug £2bn gap".

In its own self-regarding way, The Telegraph could not resist having its defence correspondent, Sean Rayment, preening that, "The Sunday Telegraph has learnt," in order to tell us: "Military chiefs plan to shelve some of the country's costliest military projects to stave off a financial crisis …".

Nevertheless, the information is useful, as we learn that, "The Ministry of Defence needs to save about £350 million annually for the next three years to stay in budget, which is only possible if projects are shelved or cancelled." But that, even from this garret in West Yorkshire, 200 miles from the seat of power in London, is a statement of the bleedin' obvious.

The rest is speculation, with Rayment writing that, "The RAF and Royal Navy look poised to take the brunt of the squeeze with the possibility that projects such as the Eurofighter programme, the RAF's Future Strategic Tanker and the Trident replacement programme could be axed." He adds that, "Many senior officers believe that the funding crisis would be solved by cancelling the contract for the final 88 of the RAF's 232 Eurofighter aircraft, which would save £4 billion."

The comment about the Eurofighter is probably true, but as we pointed out, cancellation is not going to be that easy. Not only is there a strong industrial lobby supporting the purchase, the multi-national structure of the contract is such that cancellation penalties might actually cost more than buying the aircraft.

Turning to The Sunday Times, one gets a sense of the way the battle will be fought, with Mick Smith writing that, "The government is planning big cuts in an attempt to plug a £2 billion black hole in the defence budget…", with him adding that, "All three services will be affected, with at least one major programme axed and reductions in vital ships and ground attack aircraft."

One could take it that Smith intends the qualifying adjective "vital" to apply to both the ships and the "ground attack aircraft" and he is undoubtedly referring to the Trache 3 Eurofighter contract. Vital, in our view, it is not – it is a millstone around the neck of the Defence programme - but there are plenty of people prepared to argue otherwise, and we can expect a succession of "shroud waving", warning of the dire consequences to "our boys" if these hideously expensive white elephants are not bought.

However, as a sign that the supertanker is at last turning, The Telegraph allows the comment that, "But for many senior officers the problem with the defence budget is how the money is spent rather than increasing the amount of cash available." Rayment then cites Tim Collins, who …

…believes the problem lies with the defence procurement agency, the department responsible for monitoring defence spending. He told this newspaper: "Money must be found from somewhere to upgrade the Armed Forces. That doesn't mean there is not enough money in defence: it is just not being spent properly.

"The first thing that should be done is to disband the defence procurement executive. Two 23-year-old women with a defence catalogue could do a better job than those people in the MoD.

"There is enough money to provide a decent defence with a worldwide capability, but it is mismanaged and what we need to do is to stop the waste, and procurement is the biggest waste of money in defence.

No doubt, Collins is picking up the vibes from his pals in the defence establishment, but this is no more or less than what this blog has been highlighting, virtually since its inception – that procurement is the key to defence policy.

Furthermore, after many years of neglect of this vital subject – with the politicians far too willing to pander to the military obsession for shiny new and increasingly expensive new "toys" – it is quite clear that this is where the debate on defence is now focused. The issue is not so much "cuts" but a realignment of priorities. Much blood will be spilt before the issues are resolved, as the different factions fight vicious rearguard actions to save their favoured projects.

It is in this light that we then turn to the Telegraph op-ed, which is given over, on Remembrance Sunday, to the leader of the Opposition, David Cameron. And, in what must be the first time, he writes exclusively about defence.

But, if Cameron is aware of the debate raging throughout Whitehall and the defence establishment, he gives absolutely no sign of it. His contributions to the fighting efficiency of our Armed Forces are a trite reference to defence spending as a proportion of GDP, and a "motherhood and apple pie" injunction that, "We have to spend our money more wisely and get more of it to the front line."

However, all that translates into concrete terms is: "That's why Liam Fox, the shadow defence secretary, has made it his priority to restore those cuts to the Army, and the three battalions that have been abolished in recent years."

For the rest, Cameron continues his obsession with regarding the Armed Forces as an adjunct to the welfare state, making his personal priority the, "Forces' Families Manifesto." His fine sentiments press all the buttons in the "emotion department" but there is no recognition that it is hard-headed realism in defence spending that saves lives and makes the money available for the welfare improvements that he – and everyone else – wants to see.

It is thus in the "hard-headed realism" department that we have yet to see any steel from the Conservative Party which, again as we have pointed out before, means that it is not even part of the debate.

Unless they wake up to what is really going on, the Party's unfocused bleating will be drowned out by the sound of the knives being sharpened against the grinding stone of realism.