Good news is no news … 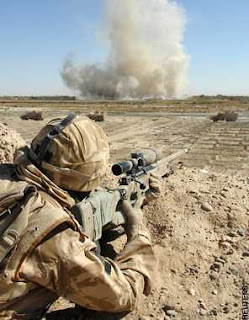 Out of the blue this morning we learnt from The Daily Telegraph that the British Army was mounting an major operation aimed at recovering Musa Qala from the Taleban.

This was the town in the centre of the northern sector of Helmund province, controversially abandoned by the Army in October 2006 after a deal with the tribal elders of the town, only to have the Taliban move in shortly afterwards.

Although there was speculation in March of this year that Nato forces were poised to recover the town, with the launch of "Operation Achilles", which involved over 4,500 coalition troops, plus 1,000 soldiers from the Afghan National Army (ANA) nothing came of it, or subsequent operations until late October, when coalition forces moved back into the area.

This came with the pacification of Sangin, largely attributed to the intervention of the Warriors, and it is now clear that the Army is better positioned for an assault on what has been called "Afghanistan's Terror University Town"

The Telegraph majors on British forces capitalising on a Taleban "split", with one of the four senior Taliban commanders in the area, Mullah Abdul Salaam, in negotiations with the Afghan government, indicating that he wishes to defect with up to a third of the forces defending Musa Qala.

Not stated by the paper, which did not cover the recent successes, the weakening of Salaam's resolve must surely be partly influenced by the new potency of the British Army. But such issues do not register with the Telegraph which – like most of the media – is wholly failing to develop a narrative account of Afghani operations.

A newspaper can, of course, please itself about what it covers, but totally inexcusable is a similar lack of narrative – and a complete absence of urgency – on the MoD website. While the Telegraph has at least covered the current operation, not so the MoD, which has not added to its website on Afghan operations since 6 November.

We have remarked before about the what Nicholas Soames called the "Ministry of Defence's dismal performance in respect of telling the story of the astonishing achievements and activities of British troops on operations" – and here we have yet another example.

There are no security issues involved in the MoD publishing its own account of the current operation, otherwise the Telegraph could not have published. An alert MoD publicity team would have had their own version of events up on the website, linking to the Telegraph story to coincide with its publication.

As it is, on reading the Telegraph report, any reader turning to the MoD website for more detail and additional photographs would have found nothing. And, as any blogger will know, if there is nothing relevant up on the site, many people will not bother returning. In this context, a piece up days or even hours after the Telegraph story is a wasted opportunity. The moment has gone.

Elsewhere, my colleague writes yet again on the importance of winning the propaganda war and, once more, the MoD is found wanting. Despite all its resources, when it come to good news, all that seems to mean to this sluggish department is simply no news.