Into the premier league! 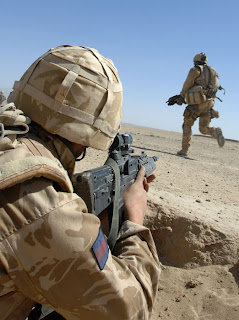 Now, two days after The Daily Telegraph broke the news, brief details of the British Army operations in Musa Qala have finally hit the MoD website.

But the fact that only the Telegraph ran the initial reports, from an embedded reporter, shrieks of a deal, the MoD trading exclusive coverage of an event in exchange for a guarantee of publicity. Thus it is that news of a major British operation is deemed to be the property of the MoD, to be traded for favours offered by a commercial company – in this case The Daily Telegraph - to exploit for its own financial gain.

Clearly though, if information about British military actions is a tradable commodity, the MoD (and its predecessor) has been missing all sorts of opportunities. Just think, the War Office could have given exclusive rights to, say, The Daily Express (then the biggest seller) for coverage of the 1944 invasion of Normandy. Bids for Market Garden, the ill-fated Arnhem operation, could have been put up for auction and, of course, a premium might have been expected for the crossing of the Rhine.

But why stop there? The possibilities are endless. The MoD could get press organs to sponsor different battles, encouraged by opportunities to place their logos on the armoured vehicles and advertising slogans on personal armour. The Sun would really go for that. That newspaper might even sponsor a new Predator UAV, which the MoD could arrange to tow an advertising banner over the battlefield.

Even then, the creativity should not stop there - why limit this to deals with the media? With a bit of imagination, the MoD might get some interest from MacDonalds, with prominent slogans on the soldiers' rations, and exclusive interviews with victorious troops who could be schooled to extol the virtues of "chicken McNuggets" as a war-winner.

However, in the interests of fairness, one must not forget the enemy. With a little bit of careful negotiation, the Taleban could perhaps be persuaded to share the TV rights. The battles could then be carefully orchestrated so that live coverage could be beamed to the UK to coincide with prime-time television. The highest bidders could also be offered post-battle interviews with both sides, while the rest would be given action-replays of the highlights, at reduced fees. 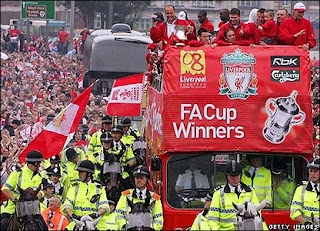 Come to think of it, if the MoD really got organised, it could arrange "premier league" battles and run a whole season of them. There could be a cup for the victors, the "finals" being fought out at the end of the campaigning season. These "premier league" battles would, of course, attract long-term sponsorship deals, with the sponsors' logos embossed on the SA 80s and air support provided exclusively by B&Q Eurofighters.

Therein, obviously, lies the counter to defence cuts. Once the commercial opportunities of British operations have been fully exploited, the military could become wholly self-financing.

And, as historians write of the Barclay's battle for Musa Qala, fought by the Clydesdale Bank Guards and the 40th Vauxhall MasterFix Commandos in their Subaru Vikings, we could rest in the comforting knowledge that, at last, the British Army will be properly kitted out. Furthermore, we look forward to seeing the cup winners welcomed home after each successful season, to do tours of their home towns in the Carlsberg open-topped bus.

I think the MoD is really onto something here.