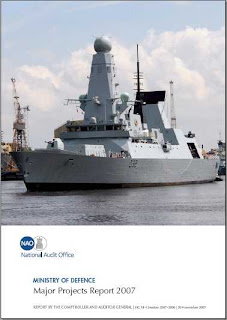 If the Armed Forces are feeling unappreciated – and indeed anecdotal evidence supports this – one wonders quite what is being achieved by the media stories that continue to filter through the system.

The latest comes from The Daily Telegraph announcing: "Armed Forces row over £1bn shortfall", whence we are informed that a "fresh row" over Armed Forces funding has broken out "after it emerged that defence chiefs are having to find an extra £1 billion for cost overruns on major projects."

This is on the back of the latest NAO major projects report, an annual production which charts the progress of the 20 most expensive MoD procurement projects.

Generally, however, the report is favourable, stating that, "Overall the Department is in a similar position to the Major Projects Report 2006 for forecast cost and performance," although it adds, "there continue to be time delays". These, as one might expect, are largely down to legacy projects, which started before the current procurement system was in place.

The main point of contention seems to be the transfer of parts of budgets from different projects into other categories, the details of which are abstruse, and could be construed as normal – or "creative" depending on your point of view – but nothing in the report would seem to warrant the government being "condemned by the Tories", as the Telegraph reports. 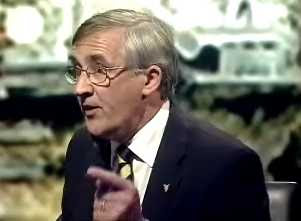 Nevertheless, we have Gerald Howarth, a Tory defence spokesman (pictured), saying: "This report provides further evidence of Labour's incompetence in supplying our forces with equipment, a failure which is potentially placing lives at unnecessary risk".

Included in that category is FRES and, we are told, "Ministers were also accused of seeking to disguise the fact that the £10 billion project for a "battle-field taxi" armoured vehicle - known as the Future Rapid Effect (sic) System - was slipping further behind schedule."

All of this could, of course, just be treated as part of the knockabout element of British party politics. Government performance should be open to scrutiny and should invite robust comment from the opposition.

However, none of the projects under consideration by the NAO, with the exception of the Nimrod MR4 project are directly related to the conduct of operations in either Iraq and Afghanistan, in such a way that there could be any serious arguments that lives were being put at risk.

And, of the Nimrod project, that programme was initiated in 1992 as the Replacement Maritime Patrol Aircraft (RMPA) procurement programme, and contracts were awarded in December 1996 – both events under the Conservative watch.

Furthermore, it really is the case that major defence projects are problematical, not only in this country – under every administration – but in countries as far afield as the United States, India and Australia. It is thus something of a cheap shot to complain that the current delays and overspend provide "further evidence of Labour's incompetence" – especially as, by common accord, the efforts of Lord Drayson have been successful in reigning in the excesses.

In respect of FRES, however, the criticism is especially unwarranted. From the outset, this was an over-ambitious project, based on the flawed assumption that medium-weight, air-portable armoured vehicles could be deployed safely in the modern battlefield. Had the project forged ahead, without taking into account experiences in Iraq and Afghanistan, we would now be committed to building a range of extremely expensive and (even more) inadequate vehicles.

Even now, with much of the technology on which the FRES concept will rely being immature, there is a good argument to be made as to whether FRES should go ahead at all and whether the money earmarked for this project should be better spent elsewhere. 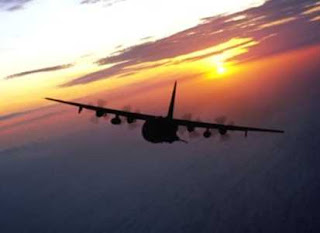 There is, for example, a good case for the purchase of light helicopters to enable increased air-mobility of tactical units, there is an argument for light aircraft to be used for close air support, for the greater use of a range of MRAP-type vehicles, for the development of a fixed-wing gunship on the lines of the AC-130, and many more issues which have been debated on this blog.

What one would expect of an opposition, in the context of holding government to account, is constantly to be probing the government on alternatives, on better ways of achieving a result, on cheaper ways of doing things, and of weaknesses in the systems which can readily be improved.

Defence is too important an issue for "biff-bam!" politics – morale is too fragile a beast to allow it to be used as a political football. The public should be able to judge the opposition not by the stridency of its criticisms of the government, but by its constructive (and realistic) comments and by its range of ideas which could improve the performance and conditions of our Armed Forces.

By this means, of course, the opposition could demonstrate to the public at large that defence would indeed be better in the hands of a new government, without having to rely on a diet of scare stories that the "government" was putting lives needlessly at risk.