Becoming part of the problem 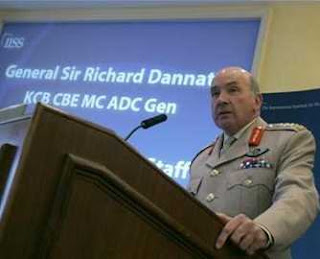 General Sir Richard Dannatt is Chief of the General Staff, professional head of the Army – in which context he would be expected to know a thing or two about the state of the Army he commands.

Thus, when according to The Sunday Telegraph, he is warning that "years of Government under-funding and overstretch" have left troops feeling "devalued, angry and suffering from Iraq fatigue", his words must be given some weight.

And when we are told by the newspaper that he reveals "in a top-level report" that the present level of operations is "unsustainable", the Army is "under-manned" and increasing numbers of troops are "disillusioned" with service life, there is good reason to believe that there is a serious crisis within the Army.

Certainly, this thesis is entirely supported by the unofficial Army forum and, when defence secretary Des Brown tries to support his record as custodian of the Armed Forces, he gets barely a voice in support from the same forum.

Then we get Mick Smith in The Sunday Times who also plunges his dagger into the back of the MoD, his piece claiming that the MoD is admitting that "almost half of Britain's forces are unfit to be sent on operations because of equipment shortages."

We are thus told that paratroopers preparing to go to Afghanistan in April have to train with only six Land Rovers fitted with machineguns, instead of the 110 they should have, while there are only six Challenger 2 tanks available for training in the UK and Germany because others have been cannibalised to provide spares for Iraq.

Altogether, therefore, the picture looks unremittingly bleak, an almost unanimous view that the Army is "broken".

But then we look at the detail of what The Telegraph lists as the pinch points and we see issues such as delays to military inquests, military housing estates claimed as being unsafe and "being overrun by immigrant families".

There are claims of poor food quality, creating a "pot-noodle and sandwich" culture among junior soldiers, concerns about “work-life balance” and allegations that soldiers are "going sick" to get out of the Army.

Adding to the tale of woe is the complaint that leave is often cancelled or constrained "because of operational overstretch", harmony guidelines - the time between operational tours - are becoming meaningless, fitness in the Army is tailing off and more soldiers are medically downgraded and, the coup de grace, the Army is "no longer fun".

Looking at this in the round, this is also the Army where there is intense competition between battalions for Afghanistan deployments, an Army where soldiers on operations no longer have any complaints about personal kit – including the much maligned SA 80 rifle, which has matured into a reliable and effective weapon.

This is an Army which has received a substantial amount of new equipment, including the Mastiff, Bulldog and Viking vehicles, the Osprey body armour, and new UAVs, with more equipment on the way. This allows Browne to point out that the senior British commander in southern Iraq, Maj Gen Jonathan Shaw, said in June: "I have never seen a theatre so well supplied with new kit… this steady trickle of new kit has had real and almost instantaneous impact."

For sure, there are endless problems, and new ones are turning up all the time, but the picture is certainly not one of unremitting gloom that the media is painting.

Even some of the things that are wrong did not start with the current administration. There are, as even Patrick Mercer is prepared to concede, problems that existed ten years ago. Mercer, though, will have it that they should be solved by now and argues that "it is a disgrace that senior officers and ministers have allowed this [current situation] to happen."

But, if one takes the forces' accommodation (for troops and families), the issues are by no means straightforward. For sure, there are substandard billets but not a little of the problem is that even Privates are no longer prepared to live in barracks, thirty to a room, and are demanding single rooms – en suite - a standard to which not even junior officers could aspire as recently as thirty years ago.

Similarly, spouses and partners are no longer so willing to subordinate their aspirations to those of the Forces. Many wives – in Services which are still predominantly male – want to work and have their own careers. They do not take kindly to frequent postings and the disruptions that are inherent in marriage to Service Personnel. And neither are they so willing to pack their children off to boarding schools while they follow their husbands on the diminishing number of accompanied postings (and nor are they fully funded to do so – one of the more insensitive "cuts" in allowances that has done incalculable harm, done, incidentally on the Tory watch).

Without dwelling on this at too great a length – although we will, no doubt return to these issues – there are problems here that are far more complex and nuanced than is given credit for, and which would have any administration struggling to deal with. Not least is the fact that the Armed Forces are, by their very nature, huge, inflexible bureaucracies, which are slow to respond to change and are often insensitive in the way they treat people.

In short, therefore, by no means all the stresses and strains in the Army are as serious as they are made out, and by no means all of them can be resolved quickly or easily, even with massively (or any) increased spending. Many have their roots in society changes which lie outside the control of the Armed Forces.

Furthermore, when it comes to the role of Dannatt, we have to remember that, although he wears a uniform, he is primarily a politician, in competition with the other Services for his share of funding. He has his own agenda and will not be adverse to playing all the cards available to him, to favour the Army against its rivals.

Dannatt, though may be playing a dangerous game, courting the media in the way that he is – not least because the other Service chiefs have their agendas and will not be kindly disposed to what amounts to institutional queue-jumping.

But, while one might expect all the Service chiefs to fight their corners, an even darker game is being played by the media. Capitalising on the failures, the stresses and the problems in the Armed Forces, journalists are making no attempts to identify the subtleties, the diverse responsibilities and the fact that problems in any Armed Forces will be constantly emerging, to be dealt with as and when they arise.

Instead, the media is focusing on the politicians, turning defence issues into a simplistic "biff-bam" drama, using any and every failure (perceived or otherwise) as a stick with which to beat the government. By this means, the Armed Forces have become a political football. There is no real interest is identifying and solving specific problems – just a search for anything that can be used in the attack, even issues which have long since been resolved.

Therein lies great danger. With such unremitting gloom projected by the media – aided and abetted by the entirely negative agenda of the opposition parties – the overwhelming impression is one of doom and disaster. Over term, this cannot help but sap morale, as the troops and their families are led to believe the situation is worse than it is. Thus, the very problem which the media are so quick to highlight, is in danger of becoming a self-fulfilling prophesy.

If we are not already there, we are getting to a stage where the activities of media are actively undermining the morale of the Armed Forces. Having moved beyond reporting, they are becoming part of the problem.