"I'm here to tell you we did it right, no apologies necessary on our part."
Lt. Shane Osborn, USN, Commander of EP-3E Mission. 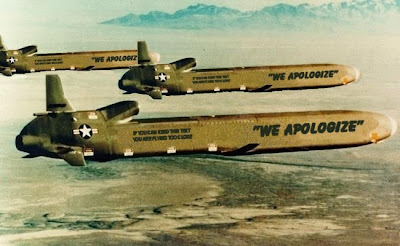 A reader drew our attention to the incident on 1 April 2001 when Lt. Shane Osborn, USN and his 24 crew were held captive by Chinese authorities for 11 days after a Chinese fighter aircraft had collided with their EP-3E Orion surveillance aircraft near that country's coast. They had been forced to make an emergency landing on Hainan island in China and endured threats of endless imprisonment and demands for public apologies.

Reconstructed from a number of reports (here, here, here, here and here), the accounts tell of Chinese soldiers surrounding the aircraft after the emergency landing, the Chinese pilot having crashed into the sea, presumed dead. One crewmember later described the face-to-face standoff with the Chinese as tense, with confusion on both sides about how to react.

The accounts also have Osborn saying that his crew quickly vowed to resist to the best of their ability, for as long as humanly possible. "The blood was not going thin on my watch," he said. "We were nowhere near our breaking point. We still had a lot of fight left in us."

On the 10th day of captivity, the Chinese even told Osborn he and his crew could go home that day if they confessed to violating Chinese airspace, a fact Osborn and the U.S. denied. He gathered his crew together and shared the Chinese offer.

"We were all scared, unsure how long we'd be there," he said. "But I told them that there have been a lot of people who have been through a hell of a lot worse than we had been. I said I'd be old and gray before that [apology] happened. It was clear from the crew's faces that that was not a deal we were going to make."

"You don't want to be used for propaganda, if you can help it," he said. "You certainly don't want to take responsibility for something you are not responsible for."

Co-pilot Lt. Patrick Honeck said, "The first day or so, we didn't know if we were going to be roughed up or anything, but as the time went on, we realized that they were more into the psychological aspect of it, trying to get us to talk," he said. "And we weren't really too afraid for our physical being."

Throughout the detention, the Chinese warned the US crew that they were carrying out a detailed investigation of the incident and there could be a trial depending on the outcome. Officials pressed constantly for information about the equipment aboard the aircraft, said Navy Lt j.g. Richard Payne. "Every interrogation I was in, they asked about the equipment," he said.

Payne said they didn't know they were being released until they were moments from boarding the chartered jet to Guam. Afterwards, he told reporters, "You all knew before we did." But, he said, when they (the crew) finally were told, "nobody showed any emotion at all. The first outburst came when the Continental jet took off."

A website at the time mocked up an apology for Lt. Osborn and his crew (above). "We returned with honor," said Osborn. And the US Navy got its aircraft back.