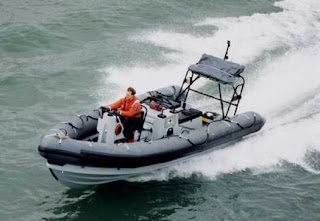 The Scotsman on Sunday adds an intriguing layer of detail to the incident on 23 March when the Iranian revolutionary guards abducted our marines and sailors.

According to Brian Brady, the political editor, the British boat crews "should have been only minutes from safety. "It now emerges," Brady writes, "they had even more protection nearby; an American military helicopter and patrol boat were within striking distance, ready - and willing - to help as the sailors were taken prisoner by Iranian Revolutionary Guards."

Sources in the US, he adds, have even suggested they were alerted to the drama by the sound of gunfire, though British authorities have refused to say if their forces were fired upon. As it was, it was only after the pair of rigid inflatable boats slipped out of contact with HMS Cornwall that the Americans were summoned - and by then it was too late.

Unfortunately, Brady then repeats the myths, stating that:

Moments after the British boats had been surrounded and captured by an Iranian force superior in numbers and weaponry, their commanders called on their allies, asking them to try to contact their crew. A British Lynx helicopter, charged with protecting the vessels, sighted one of them charging towards the Iranian coastline, with the seized seamen sitting in the front and Iranians at the wheel.

When the Cornwall finally established radio contact with one of its boats, it was confronted with a stranger speaking broken English. The crew were in no harm, he insisted - they were being "taken to a safe place". When the Cornwall's commanders protested, the radio went dead.

But what we have learnt – and it would be so refreshing if paid journalists kept up – is that the initial ambush was carried out by two Iranian vessels, light launches armed with machine guns.

On the face of it, the British actually outnumbered the Iranians in the first phase of the incident, and – in terms of number of weapons – outgunned them. Further, if the Iranians did strike, as we have been informed, as the British were disembarking from the freighter they were inspecting, the tactical advantage rested with the British. 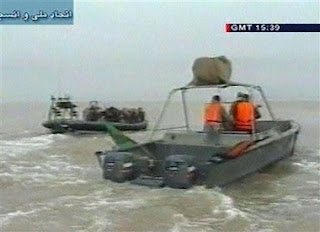 With men on the freighter deck, they had the advantage of height, of a stable platform and, from the steel decks, some cover – and the ability to disperse, presenting multiple targets. From their vantage point, even with SA80s, they could have shredded the light, unarmoured Iranian launches.

Further, had the British craft been tactically deployed, only one of them at any time would have approached the freighter, the other standing off, guarding the embarkation/disembarkation process and keeping watch. Similarly, the embarked crew on the freighter should have been keeping watch, covering both the launches and the personnel carrying out the search.

Iranian vessels approaching the freighter, therefore, should have been confronted with aimed assault rifles from the freighter deck – each capable of automatic fire – and at least one of the Navy boats with armed personnel on board, capable of running interference.

The Navy craft – known as Rigid-hulled Inflatable Boats (RIBs), produced by VT Halmatic - are extremely fast (40 knots) and highly manoeuvrable. They were easily a match for the light Iranian launches and, handled skilfully, would have made extremely difficult targets.

Of course, we will not know exactly what happened until the British crew members are released – and perhaps not even then – so we cannot be too critical of them. On the other hand, though, on the facts as we know them, there are no grounds for suggesting that marines and sailors (or their officers) can be entirely exonerated.

What does come into focus, however, is a point we raised in the forum – that the policing of the Gulf is a coalition task, involving US, British, Australian and Iraqi assets. Since – or so we are told – the Cornwall could not stand off because of the shallowness of the water, did Commodore Lambert consider asking any of his coalition partners to provide cover, bearing in mind, as we are now so helpfully informed, that there were US naval and air assets in the vicinity?

Or was this yet another case of the soooo superior British military not needing help from the uncouth, gung ho Yanks?