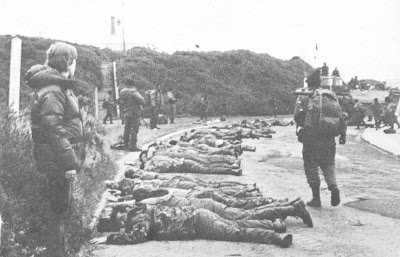 It was pictures such as these that determined that there should be a task force. There was a palpable sense of outrage as we saw the Royal Marines of Naval Party 8901 surrendering outside Government House in Port Stanley. These were Royal Marines and there was no way that mere foreigners were going to treat them in that way. Nothing less than national pride was at stake. 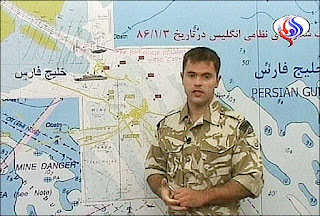 Now, 25 years to the day, when the Argentineans were rash enough to invade the Falkland Islands, our Royal Marines are in peril again. Worse still, they are being humiliated again, paraded in front of television – this time the detachment leader Royal Marine Captain Chris Air.

This video grab taken from the Iranian Arabic-speaking television station Al-Alam shows Captain Air speaking in front of a chart of the Gulf waters, purporting to show that the British boarding party on 23 March was abducted in Iranian waters. Another officer, Lieutenant Felix Carman, was also forced to make an admission that the party strayed into Iranian waters.

Back in 1982, under Thatcher at the height of her powers, there was no question about public support for military action. Today, after four years of haemorrhaging lives in Iraq under a very different prime minister, now serving out the fag-end of his term, there is no appetite for similar action. In fact, the public - to say nothing of the British blogosphere - seems to be struggling even to take an interest in such matters.

We are a sadder, diminished nation as a result.