Start of a cover-up? We learn from the BBC's Radio 4 World Tonight programme that, contrary to expectations, there is going to be no formal Board of Inquiry into the events surrounding the Iranian hostage incident. This is from Paul Adams, the BBC's defence correspondent, who reports that the Navy is instead to carry out a wide-ranging "lessons learned process".

In the meantime, British boarding operations in the northern Gulf have been suspended and HMS Cornwall has been stood down. The command of Coalition Task Force 158 has been transferred to another (unspecified) vessel – possibly American. This probably means that Nick Lambert, the current force commander has also relinquished his command.

In the same programme, opposition defence spokesman Liam Fox was interviewed, only for him to display his (usual) lamentable lack of detailed briefing. He queried the rules of engagement, the equipment and procedures but gave most emphasis to the absence of helicopter cover, questioning whether we had sufficient helicopters and whether the absence of air cover was an effect of "the cut in the helicopter budget".

After a brief word from Lib-Dim leader Menzies Campbell, who wanted all British forces to pull out, former First Sea Lord Admiral Sir Allan West was interviewed. He complained that dealing with Iranian forces which might capture our boats at any time was "not the basis on which we have been operating over the last three years" and to cope with it would require "a completely new force mix". 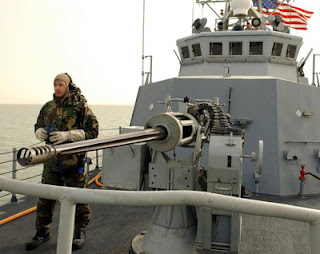 It was West, however, who got closest to explaining that the Cornwall was part of a coalition force and that there was also available a "one Iraqi patrol boat and a US coastguard cutter". That, as we know, is a gross understatement - although West did also say that we had two minesweepers - but even that was not picked up by the BBC interviewer, Robin Lustig. He failed to ask the obvious question – why one of these vessels was not tasked to escort the boarding team.

The BBC, however, is by no means the only media source completely to miss the international force dimension and the extent of the assets that were available to Commodore Lambert.

For instance, in a wide-ranging piece reporting that a Navy inquiry was under way, The Times also failed to pick up this dimension. 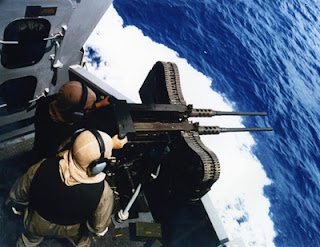 It listed "a catalogue of errors", from poor intelligence to inadequate training and lack of firepower, and cited "naval sources" which said that clear failings had already been identified. It is also understood that a thorough review of the rules of engagement and standard operating procedures is already under way to prevent another ambush, "the second of British naval forces by Iranian vessels in three years." It has not even got that right for, as we know, this is – at the very least – the third.

The paper also focuses on the absence of the Lynx helicopter, an issue which is developing into something of a red herring as, if there had been a warship escort, top cover would hardly have been necessary.

All The Times could manage in relation to the availability of suitable vessels was to convey "doubts about whether Britain has the right ships to conduct the operations required in the shallow waters of the northern Gulf." HMS Cornwall, it said, "is a Type 22 frigate that was designed to combat Soviet submarines during the Cold War."

She is too large to operate in the confined waters of the northern Gulf coast. As a result she was several miles from the boarding party when they were ambushed and so was powerless to help.

The obligatory "expert" was then wheeled on - Jason Alderwick, of the International Institute for Strategic Studies, who said that the Navy needed a warship more appropriate for the job, such as a small, fast and heavily armed corvette with a shallow draft that could operate right up to the Gulf coast-line. That may be true of the Royal Navy but it is not true of the Coalition Task Force as a whole, which was more than adequately equipped – the two Cyclone-class patrol vessels being especially suitable – (USS Whirlwind pictured above – the other pictures show respectively one of the two Mk38 25mm machine guns and one of the twin .50 cal machine gun mounts - plus an Iranian Revolutionary Guard launch ... "make my day, punk!").

Thus, for all the torrent of words and the earnest study, all but The Daily Telegraph has missed the point. There was no shortage of vessels – simply that Commodore Lambert failed to deploy his assets in such a way as to afford protection to the Cornwall's boarding party.

A combination of the idleness of the media and now the absence of a formal Board of Inquiry means that this central issue is closer to being glossed over in what is looking suspiciously like the start of a cover-up.