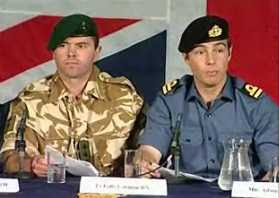 From a statement of the freed British sailors and marines, read out by their two most senior members, Lieutenant Felix Carman, 26, and Royal Marine Captain Chris Air, 25.

...we were flown to Tehran and transported to a prison where the atmosphere changed completely. We were blindfolded, our hands were bound and we were forced up against a wall. Throughout our ordeal we faced constant psychological pressure.

Later we were stripped and then dressed in pajamas. The next few nights were spent in stone cells, approximately 8ft by 6ft, sleeping on piles of blankets. All of us were kept in isolation.

We were interrogated most nights, and presented with two options. If we admitted we had strayed, we would be on a plane back to the UK soon. If we didn't we faced up to seven years in prison. We all at one time or another made a conscious decision to make a controlled release of non-operational information. 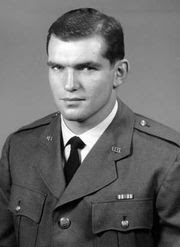 From the Wikipedia entry for Lance Peter Sijan (April 13, 1942 – January 22, 1968), a United States Air Force Officer and fighter pilot. He was awarded the Medal of Honor, the United States' highest military award, for his selflessness and courage in the face of lethal danger.

Sijan was born in Milwaukee, Wisconsin in 1942 from a Serbian father and Irish mother. He graduated from the United States Air Force Academy in 1965, and after attending pilot training, was assigned to the 366th Wing at Da Nang Air Base, Vietnam.

On his 52nd mission, on the night of November 9, 1967, Sijan and pilot Lt. Col. John Armstrong were tasked with a bombing mission over North Vietnam. As they rolled in on their target to release their ordnance, their F-4C was engulfed in a ball of fire, due to the six bomb's fairly new fuses which malfunctioned causing a premature detonation soon after the release point.

The jet then entered a banking climb before plunging into the jungle below. Sijan ejected from his aircraft, and a search-and-rescue crew, radioed to Sijan that they were attempting a rescue. After almost a whole day of locating his position and softening up air defences in the area, the SAR forces were finally able to get one of the big Jolly Green Giant helicopters roughly over Sijan's position (during this operation over 20 aircraft were disabled, due to the anti-aircraft fire, and had to return to base.

Another aircraft was also shot down, though its pilot was rescued with ease by one of the Jolly Greens on station.) Sijan, refusing to put another person in danger, insisted that he crawl in to the jungle and have a penetrator lowered by the helicopter, instead of sending down the helicopter's Para-Jumpers to carry him. However, he couldn't reach the penetrator quick enough, and after 33 minutes the rescue team, which faced enemy fire and the growing darkness, had to return to base. Although search efforts continued the next day, they were called off when no further radio contact was made with Sijan, due to his unconscious state, and he was placed in MIA status.

With a fractured skull, mangled right hand, compound fracture of the left leg, without food and little water, and no survival kit, Sijan evaded enemy forces for 46 days (all the time "crawling" or rather scooting on his back down the rocky limestone karst on which he landed, causing even more wounds) before being captured on December 25, 1967.

Although emaciated and in poor shape, he managed to overpower his guard and escape, but was recaptured within hours. He was transported to a holding compound in Vinh, North Vietnam, where he was put into the care of other American POWs. Here, in even more pain from his wounds, he suffered beatings from his captors, but never gave any information other than what the Geneva Convention allowed. After further travel to Hanoi, Sijan suffering from exhaustion, malnutrition, and disease, died in captivity on January 22, 1968.

Sijan was promoted posthumously to captain on June 13, 1968. His remains were repatriated on March 13, 1974 and positively identified on April 22, 1974. He is buried in Arlington Park Cemetery in Milwaukee, Wisconsin.