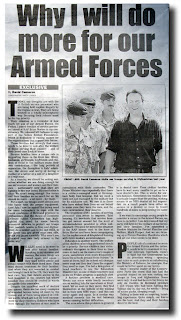 One thing that has been absent from the media storm over the Iranian hostages is any significant input from the leader of Her Majesty's official opposition, the Boy King himself, David Cameron.

Largely, this is because the Boy has nothing worth saying but, if a further demonstration was needed of how far "project Cameron" has lost the plot on defence issues, one can go out and buy a copy of the low-circulation Sunday Express for an authored piece by the Great Leader. You will search in vain for it on the paper's website for it is not even important enough to place there.

Headed "why I will do more for our Armed Forces", the Boy starts with a "topical sob" about the hostages and then moves sharply into girlie mode, where he stays for the whole piece, barring one solitary paragraph.

There, "derivative" is the new black. The Boy's contribution to defence policy is to tell us that "our troops aren't always sent into battle with the proper equipment", then adding:

Last July I saw for myself the crying need for more helicopters to cope with the harsh conditions of Helmand province in Afghanistan.

In terms of timing, this has to be one of the worst calculated claims in political history – not that anyone will notice – for only last Friday, universally ignored by the media, the secretary of state for defence, Des Browne, announced that fourteen additional helicopters would be made available for use on military operations. 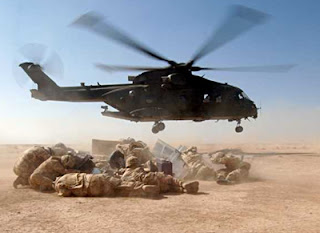 These include six new Merlin helicopters, obtained from the Danish who have agreed to wait for their batch, which will be available within a year. The other eight are the existing Chinook Mark 3 helicopters which, at the moment are languishing unused after botched "improvements" to make them suitable for the special forces. These are now to be retro-fitted with Mk2 equipment to allow them to be deployed on operations.

The saga of these Chinooks was outlined here (on the forum, strangely enough) and, faced with junking the aircraft altogether, this – at a cost in the region of £50m-£60m - was probably the best option.

Anyhow, for a complete package cost of around £230m, the RAF is acquiring a very substantial addition to its tactical transport fleet and, in the process, the Labour government has completely shot Cameron's fox when it comes to complaining about helicopter capabilities. Just to rub it in, the government's press release added:

Operational commanders in Afghanistan and Iraq have consistently and publicly confirmed that they currently have sufficient support helicopters to do the tasks required, although we can always do more with more. For example, Brigadier Jerry Thomas (Commander of British Forces in Afghanistan) has said, "Our success on operations would not have been possible unless our forces were properly equipped and supplied. To be clear, I have not asked for additional helicopters and the supply system is working well." 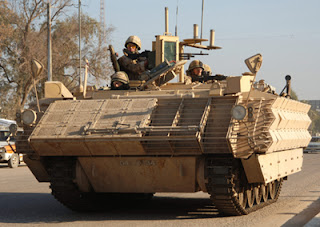 Cameron might have felt, therefore, that it was just as well he added insurance, also pointing out that the House of Commons Defence Select Committee "has highlighted the need for more heavily armoured vehicles to protect our troops from roadside bombs". But there again, with a substantial number of Bulldogs (pictured) already in service and the Mastiffs coming on stream, there is little force behind such a complaint.

That leaves one other – the Boy highlights the fact that, unlike personal weapons, body armour is not a permanent personal issue (it is allocated according to role). Big deal.

That is a battle that the government has actually lost, yielding to the lobbying power of the RAF, which is reluctant to see the Army reduce its dependence on the boys in blue-grey, and the reluctance of unimaginative senior Army officers who are incapable of fully understanding the potential of organic air power. 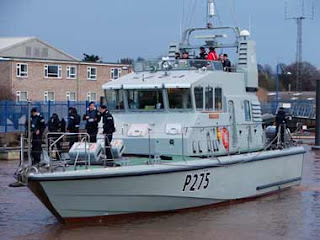 The leader of an opposition party, though, might have been better off taking the high ground, commenting adversely on the government and military obsession with equipping the forces for the mythical European Rapid Reaction Force, instead of devoting energy and wealth to kitting them out to deal with the wars this nation is actually fighting, and needs to win. He could even have asked why the Navy in the Gulf was not equipped with patrol boats that can operate in the shallow waters of the northern continental shelf.

Apart from the fact that the Boy doesn't do "Europe", such a line would have actually required thought and understanding, and he doesn't do those either. Instead, we are back, for the rest of the article, to the retreat from defence.

For sure, what the Boy wants is good stuff, better medical facilities, for instance, better housing and his "Forces Families Manifesto". But it is also secondary. He writes glibly about the "contract" (not a covenant?) between the Armed Forces and the nation, but the most important way of keeping the bargain is to ensure that personnel are properly trained, suitably equipped, well led and operating to realistic rules of engagement, with good tactics and in formations structured to meet operational requirements.

By all means ensure that injured troops are properly looked after but, in the first instance, we need to focus on ensuring that as few as possible get killed or wounded. That is not only good sense, it is good politics.

But then, the Boy doesn't even do that. He finishes off his piece with the peroration, "Quite simply our forces are the best. And they and their families deserve the best". Interestingly, emerging from a discussion on the unofficial Army forum, not even our own Armed Forces thought they were the "best". As for deserving the best, most would be entirely satisfied with good accommodation, good wages and reasonable conditions.

In offering hyperbole instead of practicalities, Cameron convinces no one, except perhaps himself.