A matter of trust 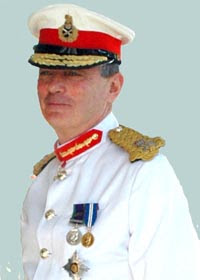 Lt General Rob Fulton - former Commandant of the Royal Marines – came very highly recommended, and those who have seen his full report on the Iran hostages incident retain their opinion of him.

His report concludes that the events of 23 March were the result not of a single failure or any particular individual's human error, but rather of an unfortunate accumulation of factors - many relatively small when viewed in isolation - but which together placed our personnel in a position that could be exploited through a deliberate act by an unpredictable foreign state.

The Chief of the Defence Staff Air Chief Marshal Sir Jock Stirrup, adds to that, saying of the report:

…it does identify a number of weaknesses, including the coherence of strategic and operational direction within the coalition environment, the handling of intelligence, the development of doctrine and the conduct of training.

As a result, we (the taxpayers) lost £350,000-worth of kit and suffered national humiliation. There is also a case to be made that the loss of "face" put other service personnel in the theatre at risk. Somebody must be responsible – heads must roll, etc., etc. And we have been up front in making those demands.

The inclination, therefore, is to dismiss Fulton's report because it does not tell us what we want to hear – that it does not support our prejudices, our hunches and our quite natural wish to see someone held responsible.

In the final analysis, it comes down to a matter of trust. Here we have a man who is hugely respected amongst his peers, who has a reputation for taking no nonsense and yet is regarded as being scrupulously fair. Thus, while cynicism and mistrust has its necessary place in politics, in this case, trust has to prevail.

Further, while there is no disciplinary action planned, the Navy has its own way of doing things. Men (and women) who cannot be sanctioned for their individual failings – only because it would be invidious to pick on them and not others – will find their careers less than glittering. They will be driving desks or handing out stores for the rest of their (short) careers.

In other words, there are many ways of skinning a cat, and we do not always have to shoot our admirals to make a point: Voltaire is not the only sage in town.