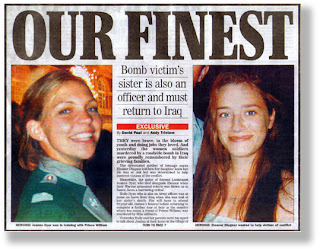 Illustrating the continued unease at the behaviour of the "frightened fifteen", it is today the turn of The Sunday Express to deliver a snub to Leading Seaman Turnoff and her cohort of warriors (not), fresh from their diabolical torture at the hands of the Spanish Inquisition Iranians.

Yet it goes further than the Daily Mail yesterday and ignores completely the fifteen, focusing on its front page on the death of the two women soldiers from the bomb in Basra last Wednesday. In so doing, however, it also highlights the sister of the murdered officer, Holly Dyer.

She is also an officer, on leave from Iraq. And, after attending the funeral of her sister, she must complete her tour of duty in that country. Like Mrs Thatcher before her, it seems some of our "finest" women – as The Express calls them - have more balls than some of the men around them.

This is all the more reason why there must be a proper inquiry into the events surrounding the abduction on 23 March of our boarding team from the Northern Arabian Gulf, and while there has been a robust discussion on our forum as to the meaning of courage and cowardice, there is no disagreement that the senior officers involved in this debacle are displaying the highest form of cowardice.

By setting up their "lessons learned" cover-up instead of a properly constituted Board of Inquiry, and throwing their junior ranks to the media wolves, these officers are creating a smokescreen which obscures the more important issues. Effectively, they are hiding behind the skirts of Leading Seaman Turnoff – if she ever wears any.

It is precisely this "lessons learned" technique to which Christopher Booker turns in his column today, telling us:

The best way to cover up a catastrophic official blunder, as Tony Blair showed us after the 2001 foot and mouth disaster, is not to allow an independent inquiry but instead to stage a carefully-controlled "lessons learned" exercise. The same technique will be used, it appears, to bury the serious questions arising from the way the Royal Navy exposed a boarding party to humiliating abduction by the Iranians.

Booker too wants to know why Commodore Lambert did not make proper use of the forces under his command, including helicopters, when the Iranians had given plenty of warning that they were looking for a chance to interfere. Was he too preoccupied with the presence on his ship of a BBC film crew, Booker then asks, or was the chance to show off the British mounting a boarding exercise on their own, and with a woman in the front line, too good to miss?

Certainly, he concludes, there could be no better way to ensure that such questions are not publicly asked than by keeping the whole thing firmly "in house" and under wraps. A 2001-style "lessons learned" inquiry would ensure that the rest of us need learn nothing that the Navy and the government don't want us to know.

It is here that we need a really robust opposition, to prevent the government getting away with this transparent ploy. But – as we have already remarked – there is little sign of a masculine response from the Conservative's defence spokesman, Liam Fox.

But if Fox himself is limp-wristed, what price The Great Leader, none other than the Boy King, David Cameron? On the Conservative Party website, he welcomes the release of the hostages and then says that "both sides should learn lessons for the future". Both sides? Now there's a stirring call to action for you, from the Leader of Her Majesty's Opposition.