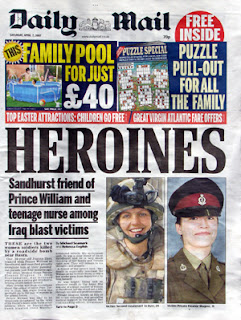 It is unlikely that the prominence of the front page content of The Daily Mail this morning was entirely dictated by news values. And, if the message is not clear enough, the implied snub is made that much clearer by the headline spanning pages two and three (pictured below).

Its declaration, "An absolute credit to the Army", referring to the two women soldiers who were killed by a bomb in Basra on Wednesday night makes a marked contrast to the relegation of the Iran hostages story, which has to wait for pages six and seven for treatment.

Mercifully, none of the newspapers seem to have used the AP photograph of Seaman Batchelor, one of the captured boarding party (below left), who was snapped holding hands with not only mummy but auntie as well, a picture which does not exactly convey the martial values of this once great nation of ours. It is some small compensation that The Daily Telegraph and others carry an account of what our servicemen are still capable of doing.

In terms of news management, one can now see a certain amount of logic in the way the MoD spin meisters are handling the Iran hostages issue. By not holding back with an official Board of Inquiry, and holding a high profile news conference, objectionable though it may be, they have achieved a sort of "closure" and will now hope that the media circus will move on without looking too closely at the underlying, and even more embarrassing issues. 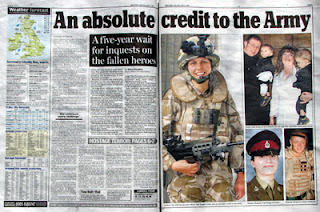 Here, of course, the blogs could come into their own, pursuing the aspects of the incident that the media have neither the patience nor the capability to follow but, throughout the whole affair. And, although that is precisely what we intend to do – although not with the same intensity of the least two weeks - it is quite remarkable how little comment there has been from the British blogosphere, and how superficial and ill-informed has been such comment as has found its way onto the net.

For robust and informed comment, you have to cross the Atlantic, where Michelle Malkin and her Hot Air blog, plus Redstate, National Review and others have led the way. Little Green Footballs, meanwhile, has the video showing how badly the hostages were treated.

Matching the silence of the (British) blogs has been a distinct lack of comment from the main political parties. In the early stages of the incident, this was understandable, as none would want to be seen to be handicapping the process of freeing the hostages. Now, however, when it is quite evident that the government is intent on burying the issue as fast as is humanly possible, the opposition should be in full cry, demanding answers to the hundred and once questions raised by the affair. 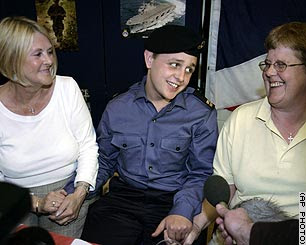 For sure, with Parliament in recess for the Easter holidays, the opposition is robbed of the opportunity to grandstand in the Commons, but, in some ways, getting your message into the media is actually easier. With mainstream government business in temporary suspension, the media is short of political copy and there is a good market for robust comment from opposition spokesmen.

The problem is though that, like the British blogs, the opposition – and especially the Conservative Party – has nothing interesting or original to say. We saw a taster of the line defence spokesman Liam Fox is going to take, when in his one and only BBC interview, the point to which he gave his main emphasis was the "shortage" of helicopters, which is by no means the most important of the issues to emerge and nor is it particularly relevant.

The limp-wristed response may be a function of the "girlie boy" line taken by the Boy King, who does not want his Green-Blue party to be associated with such nasty, manly issues like defence (even if women are getting killed and captured) but there must be millions of voters out there who have been appalled by this incident and want answers which the government is quite evidently unwilling to deliver.

There is, therefore, an opportunity for the opposition to shine, demonstrating an ability to get to grips with serious issues of the day and to back the government into a corner on matters that are of real interest to a very large number of potential Conservative voters. Unfortunately, it looks as if the Party is going to duck the challenge, projecting an image that is closer to Seaman Batchelor with his mummy and auntie than to one of a party which is fit and ready to govern.