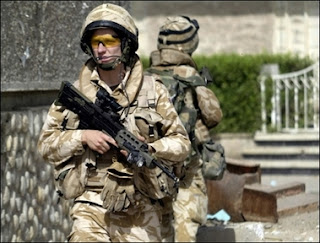 While far too much time and attention is being devoted to a rather inadequate part of the Royal Navy – and its attempts to cover up its own incompetence – we can all share some quiet pride in the way the Army is now acquitting itself in Basra.

This is not just the robust action taken last week, when up to 30 Shi'te gunmen were killed, for no losses of our own. Today, according to Reuters, British forces again killed some gunmen, eight this time, who had been found laying IEDs, close to where the four British service personnel had been murdered earlier this month.

The report retails that British forces in southern Iraq are "pursuing a more aggressive policy towards Shi'ite militias", to which we can only say, about time too.

For too long now, it has looked as if British Forces were a soft touch. Now, unlike the pansy tendency in the Navy, it looks as though the Army has decided that a group hug is not the answer and the way to deal with terrorists is to kill them.

The more aggressive stance has come just in time. I was truly shocked to read in Michael Yon's report on British troops in Basra that, days after the four had been murdered, a Challenger tank had been destroyed by an explosion that also cost the driver his legs.

This, some experts warned would happen if we started introducing heavier armoured vehicles into theatre – put as an argument for keeping "Snatch" Land Rovers in place. The terrorists would simply build bigger bombs. But, as was pointed out, this is not a zero sum game. Bigger means fewer, they are more difficult to transport, they take longer to place and the bombers are thus at greater risk of detection.

Without knowing any details of today's gun battle, there is a possibility that these factors came into play.

It remains to be seen whether the MSM actually report this incident, but we do hope so. That the Army, at least, can still do its job, is something that should be widely known. I am all in favour of "quiet pride" – that is the British way. But it should not be so quiet that no one hears.