Is this the price? 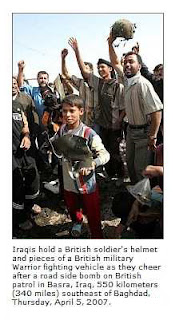 As the "frightened fifteen" were whisked away in military helicopters from Heathrow, after their arrival from Tehran this morning, we heard news that the "Arab street" is rejoicing in Basra after a roadside bomb killed four British service personnel and their interpreter, and seriously injured another soldier.

Pictures of the scene (above) show locals cheering and rejoicing, parading with a soldier's helmet and fragments of the Warrior, in Hayaniya, a slum area on the northwestern outskirts of Basra - known as a stronghold of local (Iranian-backed) Shia militias.

According to a more detailed report in The Times the personnel died when a convoy of armoured vehicles was attacked by two devices last night. The patrol then came under attack from small-arms fire and rocket-propelled grenades. 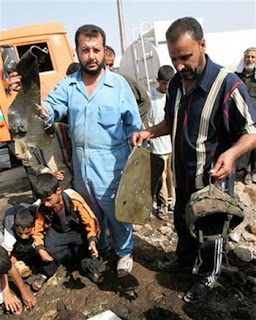 Witnesses tell of the British patrol having repulsed an earlier ambush by five insurgents in a different district of the city, wounding one of the attackers. During the second ambush, British forces returned fire while trying to evacuate the wounded.

Photographs of the scene showed a large crater in the road that was at least a three feet deep and several yards wide. Iraqi children (and adults) were taking away pieces of burned wreckage.

The Times (and others) also report than, after the attack, a British patrol was seen storming an Iraqi checkpoint close to the scene of and disarming the police there.

This now brings to six the number of British soldiers killed in Basra since Sunday, making it, as the paper observes, one of the deadliest weeks of the Iraq war for UK forces.

No commentators are making any link between the bomb incident and the Royal Navy hostages, but the loss of face embodied in the humiliating capture of the British personnel and their subsequent behaviour can only have emboldened attackers, who could see for themselves the weakness of British forces.

Appeasement brings its own penalties and, in the greater scheme of things, no one can argue that the events of the last 14 days have in any way improved the prestige of British forces, where winning the respect of the local populace is a vital precursor to dealing successfully with an insurgency.