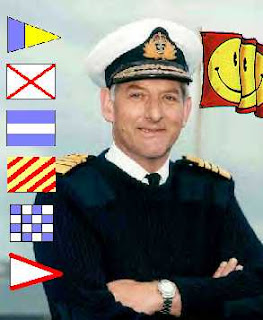 The Tory Tribe – or, at any rate, a voluble part of it – is, as usual, displaying the political acumen of the Forth Form Remove, falling over itself to applaud Michael Heseltine, who writes a piece in today’s Daily Mail on the fallout from the Iranian hostage situation.

On the strength of his comments on yesterday's BBC Radio 4 Today programme, Heseltine had been given license to comment in this tabloid, coming up with the predictable, politically motivated assessment that the whole blame for this current PR fiasco must rest with the secretary of state for defence, Des Browne.

Technically, Heseltine is right – in that the buck stops on the secretary's desk. But there is more depth to this former defence secretary's comments. Firstly, he asks for a public inquiry (which must surely now be needed) to "look into the exact circumstances of the detention of the Royal Navy party, studying in particular the alleged lack of support from the nearby task force headed by HMS Cornwall."

These are valid points, and show some understanding of the complexities of decision-making in the MoD, but the thinking is too sophisticated for the "Tribe". It wants political blood and chooses to home in on the mantras raised by Heseltine of "underfunding" and "overstretch". It forgets, of course, that it was Heseltine who made the disastrous decision to buy the Eurofighter. Yet it is that white elephant which is currently soaking up a disproportionate amount of the defence budget, making absolutely no contribution to the campaigns in Iraq or Afghanistan, where resources are so desperately needed.

However, the best report so far of the events leading up to the publication of (some of) the hostages' accounts comes from Michael Evans, Defence Editor of The Times.

He reports that decision to let them sell their stories was taken only hours after the 15 sailors and marines landed at Heathrow last Thursday, after a submission had been sent to the MoD by Vice-Admiral Adrian Johns, the Second Sea Lord, who is responsible for all personnel issues in the Royal Navy.

According to Evans, citing "defence sources", Admiral Johns "judged that it was appropriate" for those released captives who wished to do so to be allowed to receive money. He sent the MoD a memorandum that outlined his reasons for giving permission to the Marines and sailors to tell their stories.

Des Browne, we are told, noted its contents, but took no further action. Adds Evans, again citing an anonymous defence source, "He was not required to make a decision. The decision had already been taken by the Navy and all he had to do was note it." That source acknowledged that as the political boss of the department he could have reversed Admiral Johns's decision but he felt it was a Navy matter and considered it right to leave it to the military.

A suggestion that Tony Blair had approved the proposal as a public relations strategy to counter Tehran's propaganda was dismissed by a senior MoD official as nonsense. There was, though, surprise that Air Chief Marshal Sir Jock Stirrup, the Chief of the Defence Staff and the most senior military adviser to Mr Browne, was not consulted.

This account is entirely compatible with our earlier assertion that the publication was orchestrated entirely by the Admiralty and does not in away way contradict our contention that it was part of a broader attempt at a cover-up, throwing the hostages to the media "wolves" as a way of diverting attention from the operational failures resulting from decisions made by senior officers.

That there were such failures is endorsed in The Daily Telegraph today by Allan Mallinson, a soldier for 35 years and former commander of the 13th/18th Royal Hussars. The affair started with a straightforward but entirely avoidable tactical military cock-up, he writes, adding:

The 15 sailors and Marines were operating in sensitive waters, with unclear rules of engagement, no reserve and inadequate military intelligence. For this, the local tactical commanders must answer. There must be a board of inquiry and the results nailed to the mast, signalled round the fleet, read out to troops on parade - as would have happened in braver days.

However, further up the chain of command, in the Permanent Joint Headquarters (PJHQ) in Northwood, and in the MOD itself, some very senior officers indeed must answer this question: why, when our troops are in daily and deadly contact with Iranian-supported insurgents in Basra, and with the experience of the 2004 abduction of the Marines on the Euphrates, were these boarding operations being conducted so casually?

The Deputy Chief of Defence Staff (Commitments), Vice-Admiral Charles Style, the MOD officer directly responsible for issuing the operational directives to the forces through the PJHQ, said on television last week that it was because they had conducted so many boardings recently without incident. This is breathtaking complacency that betrays a lack of understanding of the most elementary principles of force protection, the first duty of any commander, and even more of the unawareness of tactical-strategic linkage…

Having been placed in an absurd situation, the boarding party chose to surrender. This tactical decision should not be loosely criticised, but there are legitimate questions: what were the orders "on contact" with Iranian patrol boats, and were they followed? Was the decision not to offer armed resistance in any part due to the presence of a female sailor? The party's conduct after capture also begs questions, but again it needs cooler examination.

Mallinson then picks up on "the rush to judgement" by the First Sea Lord, Admiral Sir Jonathon Band, who endorsed the hostages' action in a painful interview with John Humphrys on Friday's Today programme, and by personally shaking hands with the returning sailors and marines. This, he writes, "is puzzling to say the least", asking: "Was it embarrassment at the failures at the strategic (MOD) and operational (theatre) levels?"

It is this behaviour, above all, that has raised our suspicions. Any sensible First Sea Lord should, one would have thought, have distanced himself from the incident, and relied on a Board of Inquiry to elucidate the details of what had transpired. His unprecedented decision to waive the Board and to rely on a watered-down "lessons learned" inquiry, plus this "rush to judgement", shrieks of a guilty man with something to hide.

The behaviour of Band, of the MoD operations' staff and of subordinate commanders like Commodore Nick Lambert, must therefore be subject to the most rigorous scrutiny. Only then, if it can be shown that the officers involved were handicapped by political rather than operational considerations, or were genuinely constrained by issues which only the politicians had the authority to resolve, should the blame be directed at the secretary of state.

There is, however, one important proviso. It is Des Browne's responsibility to find out what went wrong and to take steps to ensure that the necessary remedial actions are taken. Thus, demanding his resignation – as some of the Tory Tribe are doing – before even blame has been properly apportioned, is premature. But, if he fails in his own responsibility, he should go.

In the interim, the sensible Tory move would be to avoid political point-scoring (which simply irritates people) and demand – as indeed has Michael Heseltine – a full inquiry. That would be real political acumen.