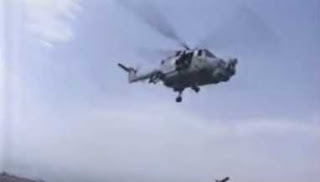 We can take a break from the Iran hostages issue, I wrote yesterday. Well, we could, but we won't, not yet. There is just one little niggle …

In his statement yesterday, defence secretary Des Browne offered us some new details relating to the ill-fated boarding party. The relevant (to this post) part of the narrative went as follows:

At 07.53 Cornwall launched two boats, with a Lynx helicopter in support, with the intention to board MV Tarawa, a merchant vessel that had evaded a boarding the day before. En route, the Lynx flew over a different vessel, MV al-Hanin, and reported a suspect cargo. A decision was made to board the al-Hanin. The position was well inside Iraqi waters.

The boarding team boarded the vessel and, at 08.46, the Royal Marine boarding officer reported the ship secure. The Lynx was tasked to return to Cornwall. By 09.00 the helicopter was back on board and put at 30 minutes' notice to fly. 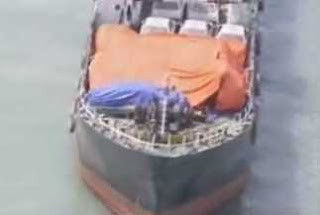 Now, the impression gained to date is that the Cornwall boarding party initially set off to inspect the al-Hanin, from which it was then to be seized. But, as we now see, it was actually tasked to look at another one first. From the narrative, therefore, it seems the first time that the MV al-Hanin came to the notice of the Royal Navy was after the boarding party had departed. There would have been no earlier opportunity to film it.

However, on the evening of the 23 March, after the boarding party had been seized, the BBC ran a clip – which was also posted on the website - showing aerial photographs of the MV al-Hanin, obviously taken from a helicopter. 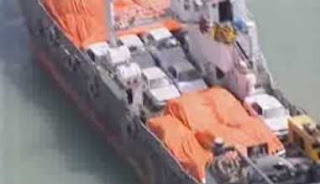 The clip, possibly, could have been taken by the Lynx's on-board equipment, except that the specification for the Lynx Mk8 does not include video surveillance equipment. Nor does the clip look as if it originated from military equipment – you would normally expect to see embedded graticule markings, time stamps and other coding. It looks to be normal commercial video. 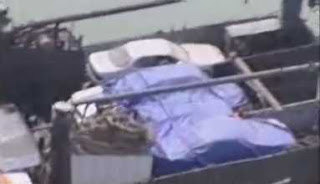 From this, of course, stem the questions of when the clip was taken and by whom. Here, we know that there was a BBC camera crew on the Cornwall on the fateful day. We also know that the BBC showed the clip but we originally thought this might be stock footage taken a day or so previously. But, we now think it must have been taken on the day of shooting, by the BBC crew from the Cornwall's Lynx.

As to when it was taken, it seems inconceivable that, after the boarding party had been seized, a BBC crew would have been allowed to travel on the Lynx. In that case the inference is that the film must have been taken before that event. Necessarily, we are led to conclude that there must have been a BBC film crew on board Cornwall's Lynx when it accompanied the boarding crew on 23 March.

That raises some more interesting questions, one of which is that, if the helicopter was carrying a film crew, could it also have been carrying a machine gun? 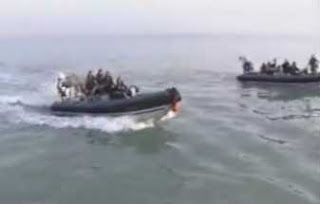 The most important question though would seem to be whether the presence of the BBC crew was the reason the Lynx turned back to the ship. The BBC correspondent, Ian Pannell, it seems, was due to interview Commodore Lambert that morning, in which case that does suggest a reason for the helicopter's return. The camera crew was needed for the interview.

Looking at the broader issues, we now know that HMS Cornwall was on an extended PR mission for the Royal Navy and the presence of the BBC crew was part of that effort. This raises the possibility that the boarding exercise on the morning of the 23 March was, in fact, set up for the cameras - with LS Turney being included in the party for that very reason.

How horribly ironic it would be if this whole drama arose from a misconceived PR exercise that went badly wrong, especially if, as we are led to believe, Channel 5 might have alerted the Iranians to the Cornwall's presence in the first place.