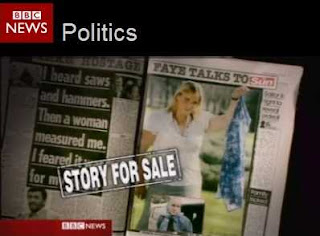 This morning, we saw a cynical attempt by the Conservative Party to extract party political capital from the Iran hostage situation. Fronted by the increasingly lacklustre Tory defence spokesman Dr Liam Fox, the attack started on the Tory Party website, and went from there.

Silent on the substantive issues, the website homed in on the "soap opera" of the "government incompetence over returned hostages", pointing the finger of blame at government ministers, following the "appalling" decision to allow the Britons held hostage in Iran to sell their stories to the media.

The bleating was picked up by the BBC although even it could not cope with the limited focus of the Tory "attack". It led its piece with the news that Fox was calling for an inquiry into the circumstances of the hostages' capture. But the thrust of the report was nevertheless on the "cash for stories" issue, with a demand that defence secretary should give "details of who was involved in the decision" and when.

This was backed up by a turgid editorial in The Daily Torygraph which could have come straight out of the Janet and John book on Tory defence policy. It too homed in on the "fiasco following the release of the service personnel captured by Iran", asserting that "the sailors and marines were … enlisted as part of a despicable spin operation" by the government.

Pointing to where the Tory attack would lie, it then declared that, when Parliament returned next Monday, "Mr Browne had better go to the Commons and give a full and honest account of what led him to sanction the selling of the captives' stories to the media."

The Dail Mail also fell into line, with a ridiculous commentary, citing that great political commentator, General Sir Michael Rose (now fortunately retired). Sir Michael, who provokes derision even in his own former Service, also had it that the decision to allow the captives to sell their stories was "part of a crude government spin operation".

By lunch time, however, the attack was contained. On the BBC Radio 4's World at One programme, Browne was on the air, accepting "full responsibility" for the decision. It had, he said, been made originally by the Navy on Thursday, when the hostages had been released and endorsed by him on the Friday, following a briefing by an MoD official. Browne's full statement is here.

The secretary of state was followed by Labour MP David Crausby, a member of the defence select committee, who affirmed that it was "pretty clear" that it was a decision taken by the Navy. He had questions on whether Browne should have vetoed the Navy but, he said, the central question was whether the marines and sailors should have been captured in the first place. The controversy over the payments "should not allow this to overshadow this", he declared.

Interestingly, Lib-Dem spokesman Michael Moore agreed with this line. A lot of questions remain, he said, but the payments issue was "a major distraction". It was "in danger of distracting us from how on earth we got into this situation in the first place." 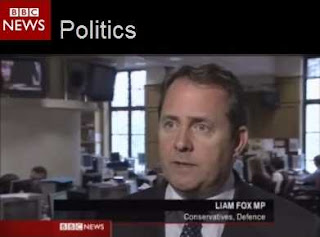 That left Liam Fox with nowhere to go. Even the BBC interviewer, Sean Ley, was by then looking at the bigger picture, pointing up the tension "between military independence and political decision-making".

In a later interview, though, the Boy Cameron still tried to pander to the tendency which prefers to see its politics in soap opera terms. Asking for the "equivalent" of a Board of Inquiry on the wider issues, he then went on quickly to the payments issue. The government's "cheap and tatty" focus on short term headlines could cause long-term damage to the armed forces, he said, desperately trying to up the ante by declaring that "the buck stopped with the prime minister". Tory Diary has the full statement.

Browne, however, had already shot his Fox. He was waiting for reports on the wider question of the hostages' capture and would make a statement on Monday to Parliament.

Then, this blog trusts, we will begin to deal with the substantive issues and, if the Tories want to bleat from the margins, they will consign themselves to irrelevance. Perhaps, in the manner of the "frightened fifteen", they should book a group hug and then get out of the way, to let the grown-ups get on with it.