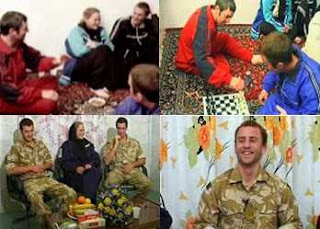 The combination of the 25th anniversary of the Falklands War and the current Iranian hostage crisis – all on the top of the festering sore of the Iraqi insurgency – has prompted The Daily Telegraph to commission a YouGov poll on how the public sees the role of Britain in the world.

The results do not make happy reading. A substantial majority of Britons would clearly like to see this country scale down its world role and begin to function internationally "more like Sweden, Canada or even Belgium". The mood, writes Anthony King for the paper is "markedly post-imperial - reluctant to see Britain maintain even its present overseas commitments and totally opposed to seeing them extended further."

"If capabilities are to be matched to commitments," King continues, "most voters would prefer to see Britain's commitments reduced rather than its capabilities expanded. With the Empire now a distant memory, people evidently believe that it is time for Britain to abandon its great-power pretensions."

What immediately strikes one of this survey, of course, is the limited scope. Not least, in what we are constantly told by the political classes is an interdependent world, the options are wider than simply whether to increase or reduce our commitments.

For instance, the Europhiles would have it that we could extend our global reach by working more closely with the European Union, striving for a common foreign policy and a European defence identity, gradually moving to a single European Army in all but name.

It has to say something of how far these options have moved down the political agenda that they are not even considered in the survey, yet – if we are to believe the propaganda – the one sure way of increasing our influence in the world, for no greater expenditure, is to pool our resources with the other EU member states.

Instead, the options offered are firmly cast within a national framework, one being that, if it was accepted that Britain’s armed forces are overstretched, “what do you think this government or any other government should do?”

Depressingly, some 60 percent want Britain's commitment overseas reduced "so that British forces do not become involved in crises overseas", while a mere 30 percent want spending increased so that the forces can continue to be deployed effectively.

What makes this so depressing is that, even within the limited national framework, the options are still hopelessly limited – and based on what could well be a false premise, that our forces are indeed deployed effectively.

Taking the last proposition first, if the arguments on this blog have any merit, no one could begin to argue that the soldiers, for instance, that the marines and sailors despatched to inspect that freighter on 23 Match were in any way "deployed effectively".

Arguably, this is but one small instance. The disastrous retreat from Camp Naji in al Amarah, abandoning an expensive asset to the militias can again hardly be regarded as the effective deployment of troops, and neither can the policy of soaking up punishment for daily mortar and rocket attacks on British bases, without any effective response.

Equally, through lack of suitable vehicles and helicopters, in a deteriorating security situation in Basra, troops venturing out of their barracks have to do so in large numbers, limited the scope of operations and the reach of British forces.

One example might be that, for lack of fast, light utility helicopters to deploy small packets of troops to key locations in the city, commanders have to detach slow-moving and vulnerable convoys comprising at least two Warriors and four Snatch Land Rovers (or other vehicles such as Bulldogs). Thus, where eight or ten troops might be employed, , to great effect, upwards of 40 might be tasked to do the same job, more slowly and less effectively.

Looking at the other proposition – the argument that the options offered are too limited – respondents are asked to link capacity and expenditure so that any increase in capacity is necessarily linked with more spending.

Time and time again on this blog, however, we have sought to show that these two issues are not linked. Most recently, we argued that significantly cheaper fixed-wing aircraft could do a crucial part of the job of a £14 million Lynx helicopter, at a fraction of the operating cost. Inasmuch as they have much great endurance, they could actually do a better job, as they would still be flying when a Lynx had returned for refuelling.

Add up the millions that could be saved from operational efficiencies and from dealing with the billions wasted on misguided and – frankly – insane procurement decisions and a case could be made for improved capacity at less or equal cost.

Now, standing back from the Telegraph survey, one can only speculate what the response would be if, instead of two options, respondent were given the choice of three: reduced capacity at current or less costs, increased capacity but at increased costs, or increased capacity with the same or less expenditure.

Alas – and it says much for the inadequacies of the media and the politicians – the case for better spending has not been made. Even on our own forum we read comments which demonstrate that their authors necessarily regard more spending as a given, to the extent that the debate is lost before it has even run its course.

However, there is one more element to this debate which should be a central part of it. When the hostage crisis broke, we observed that, while we are spending a King's ransom on our subscription to the EU – devoted in part to increasing our global influence – we might be better advised to spend our money where it really matters.

What would have been the response, one wonders, if the Telegraph survey had given respondents the choice of diverting our EU subscription to increasing our defence capacity and effectiveness.