It's taken them long enough 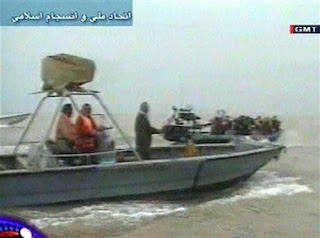 I suppose they were going to get around to it eventually, and at last they have. The Sunday Times devotes its "Focus" piece to the issue of "Fifteen sailors snatched and publicly humiliated without a single shot fired," looking at "a shambles Britain could have avoided".

The newspaper refers to this incident in September where a small group of American and Iraqi soldiers had been patrolling near the Iranian border at Balad Ruz, 75 miles east of Baghdad. They had been "bounced" by Iranian soldiers but, fearing capture, the Americans had fought back and escaped unhurt, averting a potential hostage crisis.

By contrast, says the newspaper, the 14 British servicemen and one woman "proved humiliatingly vulnerable to a low-tech Iranian naval manoeuvre that has provoked mocking headlines around the world."

But, it adds, they should have been alerted months ago by the Balad Ruz clash and could even have read subsequent warnings – reported in The Sunday Times as recently as two weeks ago – that Tehran was threatening to kidnap "a nice bunch of blue-eyed blond-haired officers". The paper continues:

Such is the shambles that senior Royal Navy officers at the fleet's operational headquarters have been directed to review the rules of engagement for naval boarding parties. If necessary they will recommend changes to ensure Britain's forces are never again seized so easily without a shot being fired.

And, while there was no doubting the outrage shared by British ministers, it was equally clear by Thursday's cabinet meeting that Britain's big mistake was to have allowed the sailors to be captured in the first place.

With diplomatic efforts apparently stalling, attention is likely to return this week to how the Royal Navy, pride of Britain for at least 350 years, allowed this disaster to happen in the first place. Have we really sunk so low that we cannot fight off a few Iranian thugs in what amounted to little more than militarised speedboats?

The paper then cites John Pike, "one of America's leading military analysts", who "was similarly baffled that the sailors' home ship, HMS Cornwall, was up to 11 miles away, too far to offer immediate cover as the British inflatables searched an Indian freighter in a routine antismuggling check."

Despite all the evidence that Iran was looking to capture "blue-eyed officers", Pike is cited as saying, "there seems to have been a loss of situational awareness on the part of the folks on Cornwall that their boarding party could be snuck up on like that".

The British lapse was all the more surprising because the same thing happened in June 2004, when eight sailors and marines were seized in the same area and released three days later. The defence ministry compiled a "lessons learnt" paper to ensure that those mistakes were not repeated.

The Sunday Times says it has learnt that the paper highlighted the need for "top cover" for boarding parties, which should always have been covered from the air by the presence of a helicopter. The Cornwall's Lynx – armed with a .50 machinegun that could have caused serious damage to the Iranian fast boats – had apparently been overhead when the sailors boarded the Indian freighter.

Thus the paper asks, "Why did it turn back, leaving the sailors exposed?" The ministry initially said last week that it needed to refuel before retreating behind an insistence that there was no standard procedure for keeping a helicopter in place. 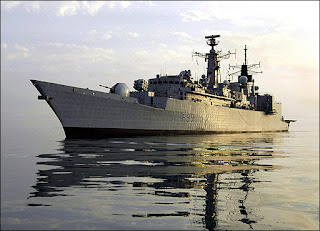 It also remained a mystery how the Cornwall's advanced radar and sonar systems failed to alert its crew to a problem. As a type22 frigate, the Cornwall has the capability to track ships up to 200 miles away. One recently retired naval officer said even basic navigation radar should have picked up motorboats at shorter range, assuming someone was looking out for them.

An official board of inquiry will ultimately be charged with examining the incident and establishing, among many other things, why no immediate effort was made to intercept the Iranians as they departed with their captives.

So much for The Sunday Times, but we also get a reference in The Sunday Telegraph which cites Maj Gen Julian Thompson, a former Falklands War commander, expressing fury at how the sailors surrendered to Iranian gunboats without a fight.

He is calling for a review of the Navy's rules of engagement. "In my view this thing is a complete cock-up," he says. "I want to know why the Marines didn't open fire or put up some sort of fight. My fear is that they didn't have the right rules of engagement, which would allow them to do this."

That plus Booker and the penny is beginning to drop, although the papers are well behind the curve. They have a lot of catching up to do.