Is this is what it's about? 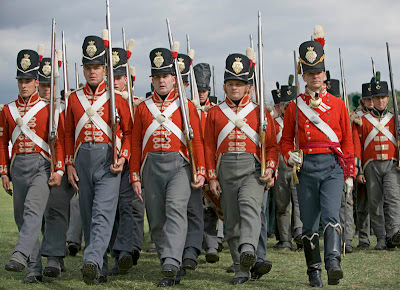 Thomas Harding in The Daily Telegraph is reporting that the major British offensive in Afghanistan (Panther's Claw) that has led to a large loss of life and many wounded "has strengthened Britain's battered relationship with America".

This is according to a "senior defence source" who is telling us that: "It has shown that other people are making the sacrifice and sharing the burden. American has been through their Golgotha moment and they admire a country that steps up to the plate and does the heavy lifting."

Once again, it seems, the shadow of Iraq looms, with the British Army highly sensitive about its performance there, even if it is holding the line with its public pretence that the campaign was successful. A big "push" in Afghanistan, therefore, is seen as a way of restoring the Army's reputation.

We wrote about this in April, when the call for 2,000 more troops was first gaining traction. With a flood of US troops due into Helmand, there was no great strategic sense in adding a much smaller number of British troops to the fray, especially as the supporting infrastructure – such as protected vehicles, helicopters, UAVs and the rest – was already inadequate. What was very clear - as we then wrote - was that the Army was playing games:

We returned to this theme in early June, noting how the Army "line" had evolved into a "warning" that the reputation of the armed forces would suffer in the eyes of senior American commanders unless an autumn surge was authorised. Our "senior commanders" are saying that such a surge would signal Britain's intent to "pull its weight".

Now it is that, for precisely that reason – it seems – theatre commanders have embarked on a risky and costly adventure, with uncertain effect and dubious strategic benefit, merely to salvage the tarnished reputation of the Army brass.

And dubious it is. Watching recently a Canadian journalist in Kandahar, describing the coalition air effort, I saw him explain how helicopters were so vitally necessary. Such was the poor condition of the road network that a journey to the area of operation, which would take no more than 20 minutes on good roads, could take four hours or more. And, as we know, mobility is further hampered by the inability of roads and bridges to take heavy traffic, limiting movement of certain types of vehicle.

Thus, the operation was entirely supported by a constant shuttle of helicopters, making a nine-minute journey to the "front line", leaving the road network under the control of the Taleban, who mine it and prey on the civilian population.

It cannot be stressed enough that the basis of governance is communications – roads in particular – and what we are seeing is the legacy of eight years of neglect, where the Western aid effort has been misplaced, misdirected and badly managed, leaving the road network in a worse condition than when we started. Thus, in the absence of the tactical mobility afforded by that network, we are forced to rely on expensive assets such as helicopters.

The point here is that the fundamental coalition strategy is one of "take, hold and build" – or "shake 'n' bake" as we call it. The idea is to create a "security bubble" in which the civilian development agencies can then operate, implementing their redevelopment agenda.

This is a strategy that has already failed – not least because the "security bubble" is urban-centred, where it is easier to maintain security. It failed because the bulk of the Afghani population is rural – 80 percent or more – highly dispersed, living off the land.

To maintain country-wide security on a "take and hold" basis would require the dispersion of the security forces, putting them in extreme peril, unless there are huge numbers. There, conservative estimates are of 500,000 or more, simply to maintain a basic presence. Clearly, there is no way the coalition is going to put that resource into the field, and the Afghani security forces cannot take up the slack. That simply is not going to happen any time soon.

The alternative is to build the road network, and then police it. It is not helicopters that are force multipliers, as Malloch Brown was saying in September last year – when no one was particularly listening – it is the tactical mobility afforded by helicopters. But these machines are only one mechanism of delivery.

In the "hold" phase of the current strategy, responsibility for security is supposed to devolve to the Afghani forces, and they are not generously supplied with helicopters – or at all. And there are no plans to remedy that situation. It would be hideously expensive even to try, and we are having enough difficulty equipping our own forces.

Therefore, the Afghan forces are going to have to rely on the road network, often using light, unarmoured vehicles with limited off-road performance. If they are to succeed, we have to build a high quality, secure road network. This should not follow the "take" phase – it should be part of it, just as building the rail system opened up the "wild west" in North America.

The communication system brought with it the security – it did not follow it. And, where the US Army Corps of Engineers played a vital part in opening up the territory, so too must the British Army open up Helmand. This can never be achieved by civilian agencies.

It is here, oddly, that helicopters are vital, but not the ponderous heavy and medium lift machines that are so much the focus of attention. Back in November 2006, we were writing about the need for small, tactical helicopters that could deliver rapid reaction units quickly, to where they were needed.

The thinking was very much on the lines of the highly successful Rhodesian Fireforce model, where small packets of troops could interdict terrorist movements, disrupting their communications and never allowing them to concentrate their forces or dominate the ground. A good road network, allowing policing by local forces, with the rapid back-up of highly mobile forces on these lines, together with good road security, has been demonstrated time and time again to be a winning formula.

Instead of that, we have large, ponderous formations, ploughing up the territory, "breaking things and killing people", fighting battles which have been described as similar to the conventional "break-out" battle, of a type and tempo known the generals of World War I. The objective is to take territory which we know we cannot hold, and for which there will never be the resources to hold within the context of the strategy so far defined. To assert otherwise is moonshine - this strategy could suck in the entire British Army and it would not make the slightest difference.

The campaign, therefore, is being set up for another of those "heroic failures" at which the British Army excels. We will have been seen to have been "doing our bit", contributing to the "heavy lifting" and spilling enough blood for the Generals to salvage their own pride and look the Americans squarely in the eye.

But as an exercise in counter-insurgency, the Generals might just as well parade their troops in red coats, lining them up to fire their muskets into the tree lines to scare off the natives. At least then they would do less damage and it may be just as impressive for the Americans, who always did have a soft-spot for our quaint traditions. Perhaps we could even burn down the White House again. With Obama inside, that could be as effective as anything "Our Boys" are actually doing in Helmand.