"Not designed for combat" 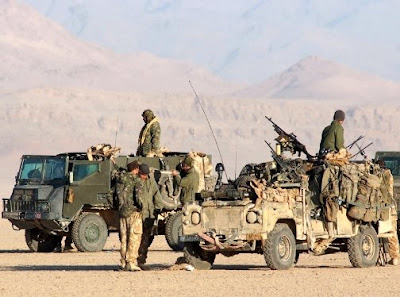 Currently running in Exeter is the inquest on the death of Pte Jack Sadler, which we covered last year, with the inquest proceedings attracting an interim report from The Daily Telegraph.

Jack, a TA volunteer in Honourable Artillery Company, was a Wimik gunner, attached to the Brigade Reconnaissance Force (BRF) serving 52 Brigade in Afghanistan during Operation Herrick 7.

On 4 December 2007, the BRF, comprising a group of Wimiks, was scouting a route for an artillery convoy of made up of two Pinzgauers each pulling a 105mm light gun, plus DROPS trucks carrying the ammunition. They were on their way to a firing point close to Musa Qala to take part in the operation to recover the town.

Making pitifully slow progress over the rough ground, they had been observed by what they feared might have been Taleban "dickers" as they had skirted a village en route before then reaching a "problematic" steep-sided wadi which they had to cross, following a route they had taken the day before – the only one which the trucks could negotiate.

Because of the heavy trucks the Force was escorting, there were only a very limited number of points at which the wadi could be crossed. While scouting the route across, Jack's Wimik hit a mine, with him sustaining fatal injuries.

No mine clearance had been carried out as the convoy was static while the reconnaissance was carried out. It was a "sitting target" and an attack was feared if it remained in one place too long, so the pressure was on to get the convoy moving again. But, on the rocky ground, the Group commander did not suspect any danger. There were no "Combat Indicators" suggesting trouble and no one in the group "sensed" any danger.

Had there been enough helicopters, the two guns and their supplies of ammunition could easily have been transported by air – as underslung loads. This would be an easy job for a Chinook. But, with a major operation in the offing, there was no spare capacity and, therefore, the battery had to travel by road, with fatal results.

That then puts the focus on the Wimik, deployed in an area where the threat of mines and IEDs was ever-present. And, it emerges from the inquest that a report submitted to the coroner described it as "not designed to be used in a combat situation because of its lack of ballistic and munitions protection".

Needless to say, the Ministry of Defeat is represented at the inquest, with Col Charles Clee holding the line. He was quick to stress that Wimik has since been replaced with newer models fitted with better protection against mines and roadside bombs.

Clee, who is deputy head of urgent operational requirements at the MoD also stated that Wimiks were "valuable to commanders because of their flexibility." Their light weight meant they could operate on local roads. He also trotted out the familiar line that, it was up to commanders on the ground to choose which types of military vehicles to use for different tasks.

Indeed there was a choice ... Wimik, Wimik or Wimik. As for it being able to operate on local roads, as a convoy escort, the BRF was being tied to a predictable route which could only be negotiated by heavy trucks. It, not the convoy, was the "sitting target".

With the Viking in the news, and the past publicity on the Snatch Land Rover, the vulnerability of the Wimik has, by and large, passed under the media radar. Yet more have been killed in Wimiks in Afghanistan than any other vehicle, at least 15 as opposed to ten in the Snatch and Jackal and eight in the Viking.

The hearing continues tomorrow so it remains to be seen what the coroner will make of this, but there is not any great confidence that local coroners can see through the dissemination poured out by the MoD. The precedents are not good.