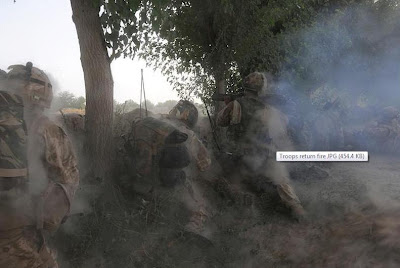 Sooner than we feared, another British soldier was reported killed in Afghanistan, bringing the number to three on the day and the total to 179.

Then, early in the afternoon, we began to get very strong rumours of many more in what was said to be a "major incident". By early evening, five more were said to have been killed, three seriously injured and three more less badly injured.

Early, unconfirmed reports said soldiers had sought cover from direct fire in a compound which was booby-trapped with an IED. Later reports suggested that troops had been ambushed after they had dismounted from their vehicle to investigate an explosion, and were hit by another IED and took casualties. More were killed and injured when the medevac Chinook arrived to pick up the original casualties. The tactics were said to be "sophisticated".

A different report, in The Daily Mail tells a different version, suggesting that after the first hit, "amid the chaos and appalling scenes, the Taleban is said to have opened fire with machine guns and rocket-propelled grenades on the injured soldiers and those going to their aid."

Apache attack helicopters are then said to have been called in to strike at Taleban positions and provide cover as a rescue operation was launched with helicopters ferrying the wounded back to the field hospital at the main British base at Camp Bastion throughout the night.

The men, from the 2nd Bn, The Rifles, were reported to have been in the Sangin area - near Musa Qala. This is not part of the current Operation Panchai Palang (Panther's Claw), which is being carried out north of Lashkar Gah.

The official total for casualties since 2001 now rises to 184, exceeding the number 179, which was the death toll in Iraq. Predictably, The Guardian - commenting on the level when it reached 179 - said that the death was likely to intensify the debate about whether the Afghanistan operation is worthwhile.

The 179th reported killed was a soldier from the 2nd Royal Tank Regiment, said to have died in an explosion during an operation near Nad-e-Ali. He was from the same regiment as Trooper Joshua Hammond, who was killed last week in a Viking.

The AP report at that time was headed, "The Climbing toll raises British doubts on Afghanistan" and cited Conservative MP Adam Holloway, a defence committee member. He said, "The casualties should fix peoples' minds on the fact that we've let the soldiers down ... The death toll means we should do it properly or we shouldn't do it at all."

He added that Britain had never had the troop strength needed to hold ground there and had failed to provide the promised security or reconstruction, leading many Afghans to believe the Taleban militants will outlast Western forces. "We're in a mess," he said.

Guthrie, according to Channel 4 News blames Gordon Brown who, as chancellor when Britain went into Helmand, had given "as little money to defence" as the Treasury could get away with.

And, in The Daily Mail, Doug Beattie, retired recently after 27 years in the Army, said: "Whether it's the 179th or the 200th, the soldier will not think twice about that number. They're just numbers - but every number and every name has a story behind it."

"For the politicians and for the Ministry of Defence," he then said, "public perception of the loss is crucial. For the soldiers on the ground, it won't matter."

However, despite the growing list of British fatalities, troops are continuing to push the enemy back on operation Panthers Claw. This is seen as a "crucial" operation for the security of Helmand.

The fighting had been "exceptionally arduous" with the threat from the Taliban roadside bombs "enormous", Lt-Col Simon Banton tells The Daily Telegraph.

Gordon Brown, who was attending the G8 summit in L'Aquila in Italy, admitted that the troops faced "a very hard summer". He said that there was no question of Britain pulling out until the international community had finished its mission.