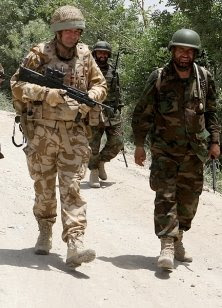 Recorded by Thomas Harding of The Daily Telegraph, Lieutenant Colonel Rupert Thorneloe (pictured on patrol), CO of the 1st Bttn Welsh Guards, has been killed in Afghanistan by an IED.

He is the first CO to be killed in action since the death of Lt-Col H Jones of the Parachute Regiment in 1982 at Goose Green in the Falklands War and the highest-ranking British Army officer to be killed in either Afghanistan or Iraq.

Thorneloe's death comes less than two weeks after the death of Major Sean Birchall, also of the Welsh Guards. He is the third Welsh Guards officer to be killed on the current roulement, with Lt Mark Evison killed on 12 May after sustaining injuries whilst on patrol outside Check Point Haji Alem in Helmand.

The first bare details were reported early Wednesday afternoon by AFP, which released details of an incident in which a bomb blast (IED) had killed two and wounded six in southern Afghanistan, bringing to 158 the number of international soldiers to lose their lives in Afghanistan this year.

It took until mid-morning today for the MoD publicly to confirm what has been known to the media since yesterday – that they were two of ours, "one soldier from 1st Bttn Welsh Guards and the other from 2nd Royal Tank Regiment."

The MoD website, however, makes no mention of Lt-Col Thorneloe or of the injured – although two were very seriously injured, one of whom is "critical". No other names have yet been given, in accordance with normal practice. Tpr Joshua Hammond of the 2 Royal Tank Regiment has now been named. He was, presumably, the driver.

This, according to The Daily Telegraph and others, brings the number of British personnel killed since the start of operations in October 2001 to 171. The explosion, we are told, happened whilst on a deliberate operation near Lashkar Gah, the media informing us that they were taking part in Operation Panther's Claw. 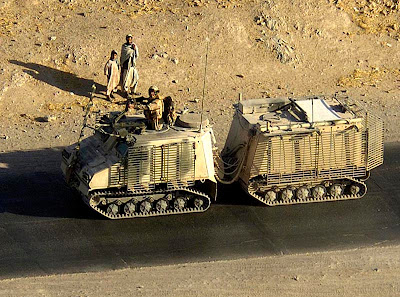 According to The Daily Telegraph, Lt-Col Thorneloe, with the others, was riding in a Viking (pictured) as it was negotiating a canal crossing. The explosion took out the rear compartment of this articulated vehicle, as well as the tractor. That would bring to eight the number of troops killed in Vikings, with Thorneloe the most senior, regarded as a "high flier" and former aide to defence secretary Des Browne.

If the unverified details are correct, then they would seem to reinforce the intelligence coming out of theatre that the Taleban are resorting progressively to much larger IEDs. However, such information as is available suggests this was not a massive bomb, and possibly survivable in a MRAP such as the Mastiff.

With the known vulnerability of the Viking, and its scheduled replacement, the use of this vehicle was supposed to have been restricted. With such a high-profile death, this may bring into focus the use of this tragically vulnerable vehicle, and call into question the entire MoD protected vehicle policy.

More details in The Times and the story is also covered by The Daily Mail. The Guardian pastes in a Press Association release, which makes no mention of the Viking, although it is briefly mentioned by the BBC. 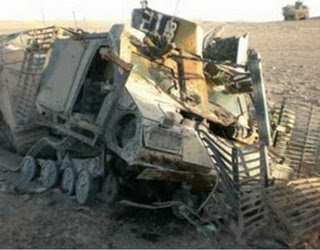 The Guardian follows up with a piece by Richard Norton-Taylor, who retails a defence official's description of a "huge bomb" that shattered the armoured Viking tracked vehicle. In the absence of a reliable source on this, we can expect the MoD to "talk up" the size of the IED in order to divert attention from the weakness of the Viking. Even in death, politics plays its part.

The Times then offers a "commentary" by Crispin Black discussing how "Rupert Thorneloe's death will affect Welsh Guardsmen deeply", with not a word about the manner of his untimely death.

In a second piece, Tom Coghlan offers his reflections of Colonel Rupert Thorneloe, the man, and then another piece where he describes an earlier ambush on a Viking supply convoy, completely missing the point. How the MoD must love him. We will review this piece separately.

James Blitz of the Financial Times comes in with his own piece. By now, the MoD is briefing freely and the focus again is entirely on the "commanding officer" aspect of the death. The MoD is cited as saying that only six Army COs have died on operations in command of their units since 1948. There is no reference at all to the Viking. This, and its extreme vulnerability to IEDs, is gradually being filtered out of the narrative as the "damage limitation" mechanisms go to work.

Reuters has its staff reporter Peter Griffiths write up the story. He also fails to include details of the Viking. This report will be reproduced in thousands of MSM reports. An "inconvenient truth" has been buried.

Note: Release of Lt-Col Thorneloe's name was originally embargoed until 10pm this evening, but The Sun has now published details on its web site. We have, therefore, now decided to publish our own post.