"Conceptually flawed from the beginning" 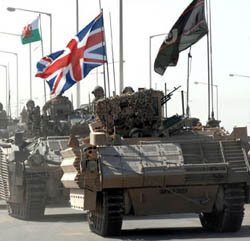 Richard Holmes is a by-word for his meticulous military histories and, as a Emeritus Professor of Military and Security Studies at Cranfield University, he is a man to whom one listens.

In a eulogy on his friend Rupert Thorneloe, headed "Rupert should not have died for this", we writes in The Times of a failure to develop a coherent Afghanistan strategy, on which basis, he says, "we should not be risking our soldiers' lives".

In developing his argument, he cites Major Little's recent article, noting his observation that the US Army has undergone a radical transformation as a result of early failures in Iraq, and the British Army has not.

It is tempting, adds Holmes, for some senior officers to lay the Army's misfortunes at the door of our crippled Government, but the problem is more complex. Although the Army had considerable experience of counterinsurgency (and went on at unwise length about the fact), there is little sign that it applied its own doctrine in Iraq.

This piece then provoked agreement from David J Pickup, a former senior lecturer in defence studies at Sandhurst. In a letter to The Times, given the title, "Flawed doctrine to blame for Army failures", his response explains, "Why the shift in Army thinking over the years through lower intensity operations is causing problems today."

During almost 20 years at Sandhurst, Pickup saw a "noticeable shift" in army thinking. After the end of the Cold War, and in common with the other two Services, the Army was looking for a role, he writes. It found it in its "perceived expertise" in counter-insurgency warfare and what became known as peace support operations.

The emphasis in officer training was shifted from traditional war fighting to these lower intensity operations, building on the "successes" in Northern Ireland, Sierra Leone and the former Yugoslavia, which were used as case studies.

These "apparent successes", Pickup goes on, "produced an arrogance in the British Army in which it projected the view that other armies should look to the British as the role models in such activities." This, he notes, "caused much irritation in a number of other countries, particularly the United States, and also in Australia after its experience in East Timor." Then writes Pickup:

Unfortunately, this whole attitude has been called into question by the Army's limited success, if not failure, in Iraq and its difficulties in Afghanistan where expertise in a narrow area of operations has proved inadequate. Consequently we now see senior army officers and their civilian and political supporters using the traditional excuses of lack of resources and poor equipment for their difficulties, reasons that have been cited in almost every failed conflict in history. In reality, the cause has been a doctrine and a philosophy that was conceptually flawed from the beginning.

What leaps out from this passage is the identification of the Army and its camp followers "using the traditional excuses of lack of resources and poor equipment for their difficulties". This is the drum we have been beating for so long that it is hard to remember when we first started. It was Little's theme and now Pickup joins him. They are far from alone, their views shared by many in the corridors of power.

The great tragedy is that the refrain finds a ready hearing in the Conservative Party and its claque and resonates so easily with the public. But it is also a huge trap. Not a few times, we have written that the military machine is insatiable. It could absorb the whole GDP and still come back for more. Tie that in with our more frequent observations on waste and it becomes evident that the more money that is poured in, the more waste there will be.

Crucially though, Pickup accuses the Army of failing through "a doctrine and a philosophy that was conceptually flawed from the beginning." That too, we have been asserting for a considerable period, and is the exact theme of Ministry of Defeat to the extent that we could say, "you read it there first", if that was not too insufferable.

The present drag of operations, in our view, stems from the inability of the Army, as a corporate body, to recognise its fundamental failings and then to address them. But, as long as it believes it has in the Conservative Party a sympathetic ear, it can put off the catharsis until the new administration is in place – whence it will learn the hard way that there will be no more resources forthcoming.

What makes this a tragedy, apart from the deaths of many good men and women for no purpose, is that a delayed reckoning will make the remedies that much harder and more expensive, while the situation in Afghanistan may have deteriorated to the point where it is irrecoverable - as it became, for the British Army, in Iraq.

With that, there is certainly not much sympathy from Pickup. He avers that the other two Services should resist strongly any attempt by the Army to make them shoulder the financial burden of the Army's difficulties. In some future conflict, he says, it may be the Royal Navy and the Royal Air Force that might need those resources.

This should be taken as a warning shot to the Army, and also to the Conservative Party. The "resources" argument is not going to fly. Lack of resources is not the problem and more resources is not the solution. Those who argue otherwise are doing the Army – and the nation – no favours.