The shadow of Iraq 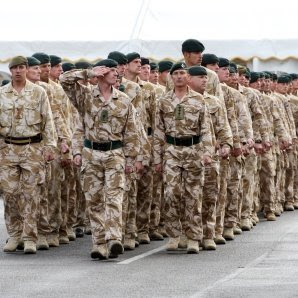 In a piece written by Kim Sengupta, the paper's defence correspondent, The Independent has picked up a fragment on the ongoing "dialogue" between the Army and its political masters over the enhancement of troop levels in Afghanistan.

Under the heading, "Army fury at refusal to bolster Afghan campaign", with the strap, "Senior commanders warn British strategic alliance with United States is being put at risk", we are told that Britain's "most senior military commanders" have warned Gordon Brown that unless he sends more troops to Afghanistan, Britain will lose credibility with its American allies.

This has been going on since April (and before) when we learned that prime minister Gordon Brown had refused to sanction additional troops for the theatre, but it has now evolved into a "warning" that the reputation of the armed forces will suffer in the eyes of senior American commanders unless an autumn surge is authorised. Our "senior commanders" are saying that such a surge would signal Britain's intent to "pull its weight".

To add to the pressure, Gen Sir Richard Dannatt has also intervened in a speech to Chatham House, declaring that: "Britain's calculation has long been that maintaining military strategic 'partner-of-choice' status with the United States offers a degree of influence and security that has been pivotal to our foreign and defence policy. But this relationship can only be sustained if it is founded on a certain 'military credibility threshold'."

He went on to say: "Credibility with the US is earned by being an ally that can be relied on to state clearly what it will do and then does it effectively. And credibility is also linked to the vital currency of reputation." He added that "unfairly or not" British performance in Iraq and Afghanistan has already been called into question by some in the US administration.

"In this respect there is recognition that our national and military reputation and credibility, unfairly or not, have been called into question at several levels in the eyes of our most important ally as a result of some aspects of the Iraq campaign," he said. "Taking steps to restore this credibility will be pivotal, and Afghanistan provides an opportunity."

That, of course, is the real issue. This is not a question that the Army might lose credibility in Afghanistan. It has already lost credibility, through its failures in Iraq and is now looking to recover the situation by beefing up its weight, to match the current and expected US input of 10,000 troops in Helmand province.

As always though, there is more to this than meets the eye. When the level of US troops is at the planned level, they will significantly outnumber the British forces. Already, US forces are taking over most of the contested areas and, with better, more capable equipment, the risk – as the "senior military commanders" see it – the Americans will start calling the shots in Helmand, reducing the British to the status of supporting elements, conforming to US strategy and direction.

The call for more troops, therefore, is as much a ploy to enable our own "senior military commanders" to maintain an element of autonomy in the province, and with it freedom to dictate their own strategic direction, independently of the Americans. The give-away is the argument that reinforcements are essential to maintain the "British footprint" on the ground.

Perversely, it is their very insistence on seeking to retain operational autonomy that is giving rise to the reluctance to commit more troops. At a political level, the campaign is seen more clearly as a coalition effort, with an awareness that, to be effective, all the disparate forces must work to a single, coherent plan rather than plough their own national furrows.

So far, all the "senior military commanders" have been able to do is make the case for retaining national autonomy, without offering any very clear ideas for their employment. To that extent, the additional troops are being seen more as a means of bolstering military egos than adding real capability.

Furthermore, given what happened last time the British were given complete autonomy – in southern Iraq – there is strong resistance to giving the British their head, especially as Gen David Petraeus is keen to give his own strategy an airing. Against all that, the credibility of Gen Dannatt and his merry little band of commanders is not considered of vital importance.

As always, therefore, the Army is "briefing" in public, hoping to force the issue through media pressure, knowing that if the right buttons are pressed, the very real strategic reservations can be turned into the usual shallow pastiche of that nasty Mr Brown not giving the Army what it needs. Things may change after Gen Sir David Richards takes over as CGS in August – and comes up with a coherent plan that meshes with US operations - but, for the time being, the shadow of Iraq looms. Dannatt looks like being disappointed.