Half as much with more protection 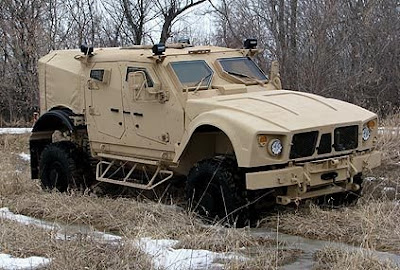 With the results of the closely-fought M-ATV contract to supply off-road protected vehicles to the US armed forces being announced yesterday, US Armed Forces are to get their protected vehicles for Afghanistan at half the cost paid by the British MoD, which has selected one of the unsuccessful bidders.

As reported by The Financial Times, the clear US winner is Wisconsin-based vehicle manufacturer Oshkosh – already a major supplier of trucks to the US and supplier of the HET and tanker fleet to the British Army.

In winning the contract, the Oshkosh vehicle (pictured above) beat off a bid from BAE Systems, from Force Protection – which had teamed up with General Dynamics to work as a consortium called Force Dynamics – and Navistar International.

The value of the contract is $1.1 billion for an initial 2,244 vehicles, working out at just over $490,000 per unit, or just under £300,000 at current sterling exchange rates. This compares with the £600,000 being paid by the MoD for the Navistar Husky, one of the unsuccessful entrants, which is reported to have failed the mine resistance test.
.
This puts the MoD in the classic position of spending twice as much as it needs to, for substandard kit, when it could have saved money and lives by joining in with the Americans on the M-ATV programme – with the added benefit of achieving logistic commonality.

Needless to say, with the BBC already having delivered its "puff" for the Husky, you will not get a squeak of protest from Britain's favourite broadcaster – which, after all, knows a thing or two about wasting money.