As rejected by Americans 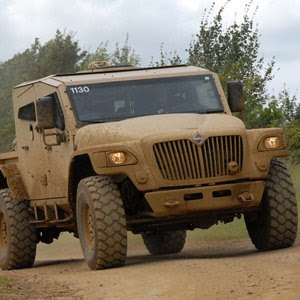 On the very day that the MoD has announced its order for an American armoured SUV for our troops in Afghanistan, analysts are suggesting that its performance "did not meet US military's expectations". It is thus unlikely to enter US military service.

The vehicle was chosen by the MoD last October as one of a range of new "tactical support vehicles" for Afghanistan. It is to be called the Husky. The preferred bidder was Chicago-based Navistar Defence.

When details were released in November, we were considerably less than impressed. It is not a custom-designed MRAP, with the classic v-shaped hull. Instead, the MoD has picked a conversion based on a civilian SUV pick-up truck known as the International MXT 4x4. To equip it for its warlike role, we have yet another Army/MoD bodge, with appliqué (i.e., bolt-on) armour.

Undeterred, the MoD has now announced that it is going ahead with the order, having awarded a contract for just over 200 vehicles at a cost of £120 million – close on £600,000 each.

The contract for modifications to the US-built vehicles, and systems integration, has been awarded to the Malvern firm Dytecna, which has had the local newspaper twittering that some "50 new jobs will be created at following the award of a prestigious equipment contract for the Ministry of Defence."

Needless so say, the MoD is in full propaganda mode, with Lt-Col Nick Wills at the helm. He is the MoD's, Tactical Support Vehicle Programme Manager in the "Defence Equipment and Support's Protected Mobility Team", and is telling us that, "The Husky vehicle provides a robust and very mobile protected support vehicle for operations. The design has picked up on many of the lessons from current operations."

However, this same vehicle has been under consideration by the US forces, as one of the four competitors for the prestigious MRAP All-Terrain Vehicle (M-ATV) contract. And, with unfortunate timing Reuters today announced that Navistar had filed a complaint with the Pentagon over the evaluation process.

Since, in a typical government bid, contractors may file a formal protest only after government action has been taken, analysts have taken this to mean that the vehicle has been eliminated from the competition. The suggestion is that Navistar's engineering performance on this contract did not meet the military's expectations.

Given that this is a commercially engineered vehicle and road legal, the most obvious inference is that the vehicle has failed to meet the protection specifications laid down by the US Army. But, for whatever reason, the rejection by the US military casts a major shadow over the MoD choice of the vehicle for British forces.

If it were not so tragic, costing the lives of many brave men and women, there would be something endearingly comic about the MoD's unerring capability to get it wrong. But then, of all the sins of which the MoD is manifestly guilty, inconsistency is not one of them.

And now, contrast with this.