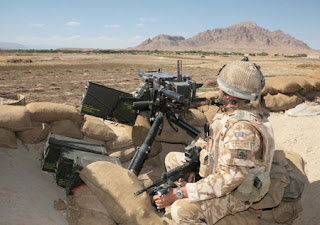 On the day that The Guardian was complaining of "Hollow power in Helmand", almost to prove its point, two more British soldiers were reported killed in the province.

The Times ran with the story, noting that both of them had died in the town of Babaji, focus of the five-week offensive, Operation Panther's Claw, where only 150 Afghans had voted in the election on 20 August. Ten British soldiers died in that operation.

One soldier, from the 2nd Battalion The Mercian Regiment, serving with The Light Dragoons battle group, died of gunshot wounds after a Taleban insurgent sprayed a foot patrol with rounds from a Kalashnikov while it was going through Babaji.

The latest two deaths bring the total number of fatalities since 2001 to 212 - all but five of them since 2006. The Times reports that 83 percent of the 75 British soldiers killed in Afghanistan this year have died from IEDs. And, since April, 60 soldiers have been killed and more than 208 have been wounded in action.

The threat from roadside bombs in Afghanistan is now so overwhelming, we are told, that the Army has restructured its recruit training programme to ensure every soldier becomes an "expert" in IEDs, although defence sources admit that insurgents have learnt how to overcome technological and tactical changes introduced by British and other coalition troops in Helmand.

This tenuous position leads The Guardian to declare that we are manning a series of Potemkin settlements in Afghanistan. The territory that US and British troops are holding, the paper says, shows no signs of being filled by a state which Afghans can trust.

Furthermore, the forts that dominate south Helmand are proving to be every bit as hollow – for the purpose of state-building – as the theatrical sets that Field Marshal Grigori Potyomkin had built along the route Catherine the Great took, to persuade her that Crimea was being civilised by Russian rule.

Continuing with this theme, the paper then declares that, like the Russian empress, Barak Obama and Gordon Brown could have an inkling that the glowing fires are fake and that there is nothing behind the sandbags and dugouts. They may have already realised that they are only buying time before an exit strategy can be realised, before domestic expectations can be reduced and before a deal is done with the Taleban – but they are not saying it.

Scorned is poured on the idea that Afghan troop numbers can rise to 134,000 by next year, 12 months ahead of schedule, and to 240,000 by 2011. Those who believe this can happen are dreaming. "How can British troops possibly deliver in a year what US troops failed to do in seven, at a cost of billions of dollars?" the paper asks.

The legitimacy of the campaign is also questioned after the election debacle, where complaints of ballot box stuffing and electoral-register fraud have turned into an avalanche. Demonstrations against Karzai now could easily degenerate into ethnic violence, giving the Taleban every incentive to continue the fight. They have victory in their sights, not talks.

Thus, does The Guardian declare, what this situation needs is not 14,000 more combat troops, which will suck Mr Obama deeper into a war he did not launch, but a fundamental rethink about how stability can be achieved.

This, concludes the paper, will be messy and involve large and hitherto unacceptable amounts of compromise – tribal peacemaking solutions which weaken the enemy rather than destroy him. It is this prospect that Gordon Brown should address. He should be leading us away from the land of delusion, not further into it.

Strangely enough, the Washington Post completely disagrees, arguing that if Obama provides adequate military and civilian resources, there's a reasonable chance the counterinsurgency approach will yield something better than stalemate, as it did in Iraq.

The Taleban insurgency, it says, is not comparable to those that earlier fought the Soviets and the British in Afghanistan. Surveys show that support for its rule is tiny, even in its southern base. Not everything in Mr. Karzai's government is rotten: US officials have reliable allies in some key ministries and provincial governorships, and the training of the Afghan army - accelerated only recently - is going relatively well.

This paper's view is that stabilising the country will require many years of patient effort and the pain of continued American casualties. Yet the consequences of any other option are likely to be far more dangerous for this country.

That view is almost exactly sahred by the Wall Street Journal which has Max Boot tell its readers that, to pull the plug on our operations now, when our troops are only beginning to fight in earnest, would be even more foolish than it would have been to short-circuit the surge in Iraq in 2007 - as so many who are freely offering advice on Afghanistan today once advocated.

Also pitching in to support the war is US defence secretary Robert Gates, who has now openly declared that the war is worth fighting and signalled for the first time he may be willing to send more troops.

Gates also is urging patience, saying that efforts by Obama - including ordering an additional 21,000 US troops to Afghanistan this spring - are "only now beginning" and should be given a chance to succeed. "I don't believe that the war is slipping through the administration's fingers," he adds.

Against all that though, is the futility of those mindless patrols, so graphically described by Lieutenant Mark Evison, the wasted effort in keeping the outlying bases supplied, and the tenuous hold on those "Potemkin settlements" while we pay for our own destruction.

The power may be there, and there is certainly a new determination being expressed in the corridors of power to see this thing though. But, as both Karzai and the Taleban mock our pretensions, is it, as The Guardian suggests, just hollow power?