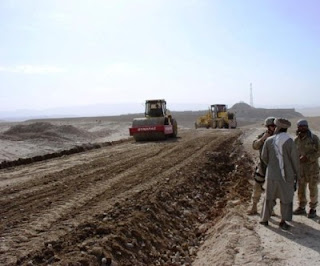 The easy assumptions made by so many commentators that the opium crop is the prime source of Taleban income – or, indeed, that eliminating opium would rob the Taleban of funds – are given another knock by a long feature article by Aryn Baker in Time Magazine.

It opens with an account of on IED attack in the northern Afghan province of Kunduz, which destroyed a US Humvee, killing four soldiers, their interpreter and a bystander. The makeshift bomb was assembled with goods from the local bazaar. The man who placed it was probably paid the going rate of $750 but, writes Baker, the cash very likely came from money donated by the international community to rebuild Afghanistan's roads, bridges, clinics and schools.

The narrative builds on our earlier piece, developing a strong evidential base to support the thesis that a major element of Taleban funding comes from protection rackets.

In respect of the IED explosion which Baker describes, he recounts how, a week before the incident, a local businessman subcontracted by a local firm working for the German government to build a road in Kunduz, handed some $15,000 in cash to a Taleban middleman to ensure that his project would not be attacked.

This is but one example of how substantial amounts of aid money from many countries - including the US - have made its way, directly or indirectly, into the Taleban's coffers. "Here we have internationals and Afghans turning a blind eye to the fact that we are paying off the very Taleban that we claim to be fighting," says an adviser to the Afghan Ministry of Interior. "It becomes a self-sustaining war, a self-licking ice cream."

Therein lies the rub. While the escalating costs of the war are straining the taxpayers of the coalition and donor countries, a Western official estimates that the Taleban is making more than it is spending, "and I don't want to even think about where the rest of that money is going." And as long as the money continues to flow, the war will go on.

Baker takes on what amounts to the "myth" that the bulk Taleban funding derives from opium, citing David Cohen, the Treasury's assistant secretary for terrorist financing. "The Taliban obtains revenue from a variety of sources, including extortion of funds from both legitimate and unlawful activity," he says.

Maj-Gen Michael Flynn, senior military intelligence official at ISAF stresses Mafia-like activities such as extortion and kidnapping for ransom. He notes: "I would say that there is more money going into the pockets of local leaders [of the insurgency] from criminal activities than there is from narcotics money."

Drug money, says Flynn, is more likely to go to national leaders of the insurgency, like Mullah Omar, who provide guidance and training for local groups. Local commanders, on the other hand, "absolutely raise their own funds through criminal activities to pay for food, IEDs, weapons and salaries" says Flynn. The billions of dollars spent on reconstruction projects are far too tempting a target to pass up.

Then we have Ahmad Nader Nadery of the Afghanistan Independent Human Rights Commission. He asserts that the nexus between the Taliban and crime is becoming dangerously entrenched in Afghan society. "The Taliban are acting like a broad network of criminal gangs that enables them to utilize different sources of income," he says.

The consequences of not paying protection – or paying the wrong people – are expensive. Baker tells us that the contractor who paid the $15,000 to the Taleban still lost a bulldozer and 12 trucks, torched by the Taleban. Two of his drivers were held for ransom. What probably happened, says Abdul Wahid Omerkhil, district governor of Char Dara, is that the contractor paid off the wrong people. "It usually happens like that. You pay one group and you don't pay the other, and they will burn you."

However, it is not just the big foreign-aid projects that get hit. Local businesses are victims too. Baker tells us of a businessman in Kandahar who builds towers for mobile-phone transmitters, he estimates that 20-30 percent of total costs go to protection payments. The going rate to protect a transmitter tower runs about $2,000 a month, he says. "You have no choice but to pay these guys. You don't want to do it, but there is no government in these areas, no security, so you have to do what you can to protect your business."

Sargon Heinrich, a Kabul-based US businessman in construction and service industries, attests that some 16 percent of his gross revenue goes to "facilitation fees," mostly to protect shipments of valuable equipment coming from the border. "That is all revenue that will ultimately be shared by the Taleban," he says.

US and Afghan government officials, Baker says, are fully aware of the scale of the rackets. Afghan Deputy Minister of Public Works Mohammad Rasooli Wali freely admits that the contractors hired to help build the multibillion-dollar ring road around Afghanistan - funded by the World Bank, USAID and other nations' development programs - probably pay off the Taliban to protect their sites and equipment.

Col Thomas O'Donovan, the departing head of the Army Corps of Engineers in Afghanistan, which is responsible for about $4 billion worth of US government contracts a year, admits that there is little the Corps can do to stop subcontractors from paying the Taleban. "If we catch them, then they are done. But how do you catch them? It's not like the Taliban give receipts."

As to dealing with the rackets, Flynn thinks the laissez-faire attitude toward protection money has got to change. One answer is seen as providing a secure environment in which contractors can work, and so far neither coalition forces not the Afghan security agencies have been able to do this.

Flynn's solution is to encourage local participation. "If you want a school, then make the locals build the school. You want a road, bring in local labour. It might be more convenient to pay off the Taleban, and it might be faster. But the community will protect what the community has built."

That may also be a tad optimistic as the Taleban are capable of intimidating local communities and if they are freely able to "tax" local enterprises, then skimming off funds from community projects should not present them with insurmountable problems.

Baker thus opts out. He relies on a weak conclusion, saying that a thriving - and legal - local economy will turn off the Taliban's faucet. To bring him to this point, he cites a US Treasury official who tells him: "If you have people making more money in a criminal organisation than they can [make] working for the government or in the private sector, it is an indication that we need to do a lot more to create a viable Afghan economy."

Correct, says Baker, adding, "and sadly, not something likely to be put right anytime soon." But what he does not add is that, in the short term, if the contractors and businesses cannot be protected and must therefore pay protection to the Taleban, then the war continues and the Afghan economy fails to prosper.

He cannot see the obvious answer – that the coalition military, as the only forces immune to Taleban threats, must do the primary development themselves.