They didn't stand a chance? 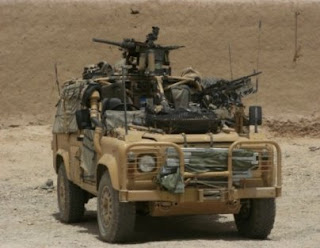 In yet another graphic example of how the media have lost the plot, we see reported the outcome of an inquest on the deaths of soldiers killed in Afghanistan. This time it concerns Cpl Tom Gaden, L/Cpl Paul Upton and Rifleman Jamie Gunn, all three of whom died on 25 February this year when their Land Rover WIMIK (example pictured) was blown apart by an IED.

The soldiers were part of an Operational Mentoring and Liaison Team (OMLT), on an "escort patrol" in the Gereshk district, driving along a new metalled road. They were hit by a "culvert bomb" estimated at 250kg, triggered by a command wire, with the triggerman some 500 yards distant.

The bomb blew a crater more than 6ft deep and the vehicle was "obliterated". Describing the scene was Captain Richard Camp, who was in the convoy: "Nearest to me the engine block was upturned," he said. " Forward of that was the main body upside down. Then forward of that was the gun turret upturned. Three big bits and a number of small bits."

The Army must have been mightily relieved when it submitted to the coroner that "no vehicle would have withstood the force of the improvised device," eliciting from the coroner, David Ridley, "... they didn't stand a chance." Recording a verdict of unlawful killing, he described the action as "cold, callous and arguably cowardly".

Whether it is any more "cowardly" than killing Taleban with a GBU-38 dropped from a B-1B flying at 30,000ft is certainly arguable, but even more so is the assertion that the soldiers "didn't stand a chance." They did ... or should have.

For sure, the size of the IED would indeed have challenged any vehicle, although a Mastiff might just have withstood the blast. But, against such devices, armour is not the issue. Dealing with culvert bombs demands a strategy all of its own.This, we dealt with in an earlier piece, the point then made that culvert bombs were by no means new to the British Army.

These bombs were encountered many times in the Northern Ireland campaign, and were used with devastating effect in Iraq. Nor are they new to the Afghan theatre. A US media report, in piece dated 31 October last year.noted that they "began cropping up in June – at least eight months before the three soldiers were killed.

There can be no question that dealing with culvert bombs presents problems for the coalition forces, especially as on some roads, they crop up at 100 yard intervals. They require assets such as UAVs, ground patrols and mast-mounted surveillance systems.

But, as we remarked in our earlier piece, engineering should play a major part in the mix, fixing grids to culvert entrances to prevent bomb emplacement, guarded by sensors which trigger alarms if there is any attempt to interfere with them.

Given that the road on which these three soldiers were murdered was newly-built, one would have thought that pre-emptive engineering would have been incorporated into the structure – it must have been entirely predictable that the culverts would become targets for the Taleban.

Ostensibly, therefore, these were entirely preventable deaths. The soldiers "didn't stand a chance" because the obvious and necessary precautions were not taken.

In terms of the media, this episode is one where the newspapers could be asking serious questions, highlighting the lack of precautions and demanding that the appropriate counter-measures are taken. But, with the anodyne comments from the coroner, there is barely any interest at all. The BBC and one or two papers have published brief reports, taking the coroner's remarks at face value.

Even The Sun, which tells us today that "Our boys need gear to survive", takes the report at face value, reserving its criticism for Gordon Brown, demanding that troops must "... be given the best-protected, high mobility vehicles ... whatever the expense."

What is missing from the WIMIK story is pre-packaged opinion, for example from a critical coroner, a high-ranking military officer, a celeb joining the fray, or grieving relatives weeping at their loss, demanding action from ... Gordon Brown.

With no political mileage to be gained, no "comfort blanket" of a pre-packaged quote, and no understanding of what is happening or what needs to be done, the media simply do not want to know. And sadly, as long as that is the case, our soldiers won't stand a chance. The media is too busy with its own agenda to care.