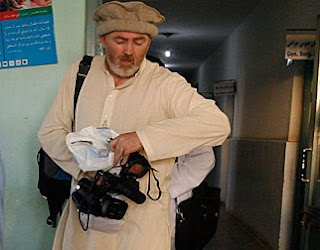 The situation in Afghanistan took a decided turn for the worse with the kidnap of Stephen Farrell. That, at least, is the view of James Robinson, Observer media editor, writing on the Guardian website.

He conveys the message that reporting is now affected by the growing risks, with Harriet Sherwood, head of international news at the Guardian comparing Afghanistan with Iraq at the height of its insurgency.

Sherwood's concern is echoed by Richard Beeston, foreign editor of The Times who thinks that Kabul is better than it was in Baghdad in 2006 and 2007, but he fears it could deteriorate. His staff now had to be far more cautious which, he says, "obviously inhibits the reporting". Beeston's immediate fear is that it is possible that the Taleban will seek to avenge Farrell's rescue by deliberately targeting reporters.

Whatever one thinks of journalists as a breed, and the media in general – and we have made our views clear enough – this is an unhappy development. Our complaint is always that there is not enough hard new and so much of what is reported is low-grade and disjointed. But even what we get is better than nothing at all.

Anything therefore, which makes reporting more difficult, and reduces the flow of material, is not welcome. This is more so as Afghanistan is reaching a critical juncture. While many tend to think of events in that country as remote from their immediate concerns, British performance there and the outcome of the counter-insurgency campaign will have a profound impact on us as a nation.

The implications can be inferred from one of the more credible parts of Gordon Brown's recent speech on Afghanistan, where he noted that al Qaeda continued to view Afghanistan as fundamental in the establishment of a pan-Islamic caliphate. A peaceful and stable Afghanistan, therefore, would be a severe propaganda blow and strategic failure for al Qaeda, said Brown.

By contrast, of course, the collapse of our venture in Afghanistan would be a severe propaganda blow and strategic failure for us, awarding a moral as well as a physical victory to our enemies and weakening still further our credibility as a significant power.

And, although this ostensibly lies in the realm of the abstract, our success as a trading nation – on which we rely for our waning prosperity – relies intimately on that nebulous quality of "prestige", which would be sadly and dangerously diminished by our failure.

The problem with Afghanistan, of course, is that we are losing. On the other hand, the government is never going to admit to that, and nor is it going to concede that is strategy is dangerously flawed, to the point of being counter-productive.

In an open society – of a type of which we still have some pretentions of being – the correctives can only come through robust and searching debate, challenging the assumptions and performance of government, mobilising public opinion to demand change.

Perhaps it illustrates just how dire is our predicament that for this we are entirely reliant on the traditional media – the blogosphere and the rest of the "new media" clearly is not up to the job. And while relying on our media to provoke this debate may be a forlorn hope, it is the only real hope that we have.

It is for this very reason that we are so critical of the media. We mean it no harm – quite the reverse. We want a more powerful, more robust, independent media that does its job properly, a job that is vitally necessary in a functioning democracy. That job just got harder, and more dangerous.

A particularly worrisome side-effect of this may be a greater reliance on the so-called "embedded" reporters, where media organisations turn to the relative security of the military, and reduce their independent coverage.

The dangers of this are apparent from the experience in Iraq where so many of the areas of the country became too dangerous for unattached reporters. The only way reporters could cover the news was to rely on military protection. The result, as we saw, was that the military controlled the news agenda, placing huge tranches of the country "off-limits" and concealing (or distorting) major events which had considerable strategic significance.

We cannot afford this to happen in Afghanistan – although in many areas of the country, it is already too late. There are already many towns in Helmand, not least Sangin, where no western reporter would venture without military protection.

Where that leaves us is difficult to say, but if the recent experience of Michael Yon is any guide – where his "embed" was cancelled without notice – then we are in for a difficult time.

It is my theory that the MoD moved in not because of what he had written but because, in his most recent reports, he had demonstrated that he was beginning to understand what was going on. The MoD prefer ignorant reporters – of which there are many – and short embeds, thus preventing knowledgeable and informed comment driving the debate. Yon had become too well-informed and, therefore, he had to go.

Now though, for journalists in Afghanistan, job security" takes on a different meaning – whether you live if you do your job properly. That should give us all cause for concern.