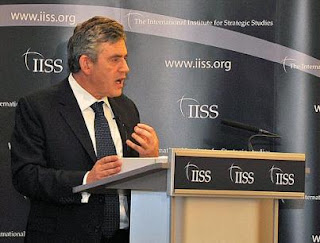 "I want to take head on the arguments that suggest our strategy in Afghanistan is wrong and to answer those who question whether we should be in Afghanistan at all."

So said Gordon Brown yesterday, in a widely trailed speech to the International Institute for Strategic Studies, under the general heading of "Afghanistan - National Security and Regional Stability."

Addressing the issue of why we should be in Afghanistan, Brown chose to make a limited pitch. Not from him was there any suggestion that we should be there to support the United States, such an activity in support of our most powerful and steadfast ally being very much in our national interest.

Such an argument would invite such a torrent of vitriol that it has to remain unsaid. Thatcher might have got away with it, but it is not a sentiment that any Labour prime minister could articulate.

Thus, all we heard from Brown was the well-worn and oft-repeated claim that our intervention with America and other allies - on behalf of the international community as a whole - helped to remove from Afghanistan a regime which enabled al Qaeda to plot terror around the world, and which culminated in the attacks on 9/11.

That is fair enough, but our continued presence depends on his thesis that al Qaeda relocated to the remote mountains of Pakistan. A new crucible of terrorism has emerged, the present threat coming mainly from the Pakistan side. But, if the insurgency succeeds in Afghanistan, al Qaeda and other terrorist groups will once again be able to use it as a sanctuary to train, plan and launch attacks on Britain and the rest of the world.

And since al Qaeda retains some contacts and provides limited support to the Afghan insurgency, and continues to view Afghanistan as fundamental in the establishment of a pan-Islamic caliphate, a peaceful and stable Afghanistan would be a severe propaganda blow and strategic failure for al Qaeda.

Whether you agree with that or not, the real test though is whether a "peaceful and stable Afghanistan" is achievable, given the current strategy. Brown, therefore, devotes some time to this issue, outlining a four-pronged strategy "for accelerating the Afghanisation of the campaign."

First, he says, we will now partner a growing afghan army presence in central Helmand. Second we will strengthen the civilian-military partnership, including on policing. Third, we will support the governor of Helmand by strengthening district government - backed by targeted aid - and a more effective, cleaner government in Kabul. And fourth we will build on the success of the "wheat not heroin" initiative which I discussed with Governor Mangal - extending it to thousands more farmers.

As to the first prong, we must move from simply mentoring the Afghan Army to what we call "partnering" with them as they take more responsibility for their country's security. This, we are told, means that when we clear an area of Taleban, it is the Afghan Army and police who must hold that ground and prevent the Taleban from returning.

Thus Britain supports faster growth both of the Afghan National Army and police, going for a more ambitious target of 134,000 by an earlier date of November 2010 - which would mean increasing the rate of training to 4,000 per month. By November 2010 Brown envisages up to a third of our troops partnering Afghan forces.

The second prong of the strategy is strengthening the security of and support for the local population by the strongest possible civilian-military partnership, including on policing. This, it would seem, involves maintaining a fully joint military-civilian headquarters, doubling the number of our civilian experts on the ground and such initiatives as the "focused district development programme".

Brown also states that we need to go further in tackling problems of illiteracy, drug abuse and corruption - and logistical problems like ensuring police are paid adequately and on time, without which progress on tackling corruption will be impossible.

The third prong is the strengthening of local and district government - a vital part of any counter-insurgency strategy - and of countering the shadow governance of the Taleban. Our stabilisation experts will work with Shuras in more villages and districts in Helmand - and right across Afghanistan, and priority must be given to the training and mentoring of the 34 provincial governors and almost 400 district governors.

The fourth is moving the economy of Central Helmand over time from heroin to wheat and to diversify even further. This, Brown believes, was the key to the reduction in heroin in Helmand by 37 percent. With the support of the British military and civilian experts, wheat seed was delivered to 32,000 afghan farmers - combining an alternative to poppy with protection from Taleban intimidation in a secured area of Central Helmand.

The British will help Governor Mangal to expand this programme next year - and also help set up agricultural training college. Over time, Brown avers, we want to see Central Helmand restored to its former position as the breadbasket of Afghanistan.

And that is the core of the strategy. There are more bits that Brown adds on, but we have essentially, more responsibility devolved to the Afghans, a stronger civilian-military partnership, strengthening local and district governance, and swapping opium for wheat. Thus does the man say, as in the Cold War, achieving our objective depends not just on armies and treaties. It depends on winning hearts and minds.

Getting to grips with this is like trying to bottle smoke. We cannot even say it sounds good. Not one element or "prong" answers the question of how the British forces intend to achieve the security that the Army argues is the necessary precursor to any and all of this activity.

Certainly, even at the first hurdle, the strategy falls as no one but the wildest optimist would assert that the Afghan security forces will be able to take the load for many years to come – if, indeed, in the foreseeable future. The question that must be answered, therefore, is that essential element – the nature of the military strategy for clawing back the land from the control of the Taleban.

On that, Brown is utterly silent – as is the military. We seem no further forward than when we started.